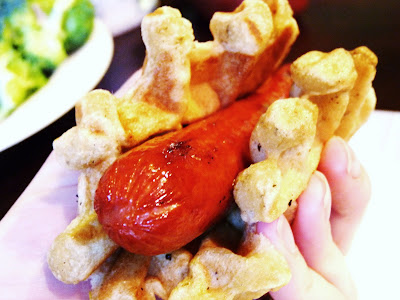 .  She has a meatloaf sandwich recipe in there and she came up with the idea of using savory waffles

for the bread.  Savory waffles are exactly what it sounds like...waffles with some savory seasonings added in like italian seasoning, sun dried tomatoes...etc.  We made savory waffles to use as hamburger buns a couple of weeks ago and it worked out great! So yummy!  We wrapped up the extra waffles and put them in the freezer so when we decided to BBQ some Hebrew Nationals the other day, I just took them out and put them in the toaster to thaw them and crisp them back up a bit.  I love having these on hand!  I just don't enjoy a hamburger wrapped in lettuce and a hot dog with no bun is no fun!

The Hamburgers we made were so good!  We shredded a sweet onion and then mixed the shredded onion in with the hamburger meat when forming the burgers.  We cooked them over briquettes and then topped with Sweet Baby Ray's BBQ Sauce and carmelized onions...and my hubby did the grilling just right, they left my mouth watering with that lingering smoky flavor the rest of that evening!  Having savory gluten free waffles for the bun just made them even better, I mean, waffles are awesome and typical hamburger buns and hot dog buns aren't even good...they are like cardboard bread....so it's not a dietary sacrifice by any means...substituting these waffles in for buns is a total upgrade!

, or use the gluten free bisquick mix, or if you are way too lazy, you could always try using Vans gluten free dairy free waffles (they just wouldn't be savory..but it would still be yummy without the seasonings)

More props to The Cooking for Isaiah Cookbook...Silvana...you have made living gluten free and dairy free exciting! You are such a genius in the kitchen!  Even if you aren't gluten free...you should try making some savory waffles sometime to use as a hamburger bun, hot dog bun or whatever kind of bun or sandwich bread you need.

Posted by Candace @ Candace Creations at 9:44 AM