well, I made the footprint gift for Grandma like I was hoping to do!  It was a big hit!
Footprint Butterfly Keepsake Tutorial 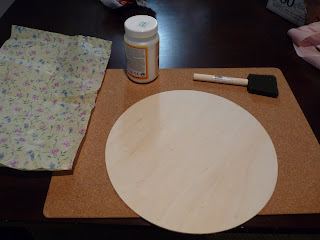 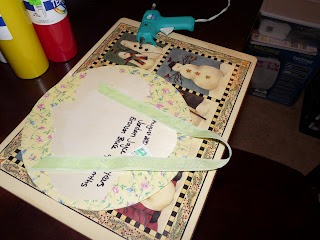 I covered the entire front surface with modge podge and then lined up and pressed on my crepe paper.  After smoothing it out and letting it dry, I put a bit of modge podge around the edges on the back side and wrapped the crepe paper around (as you can see in the above pic).  I also hot glued a ribbon to the back for hanging. 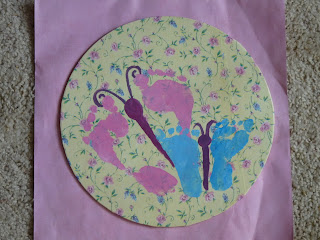 I mixed some tempura paint and then used a foam brush to apply it to my daughters feet, while she sat on the counter in the bathroom.  I pressed the the plaque against her feet to make the prints.  I realized after the fact, it would have made better butterfly wings if I had done her feet with the outsides facing each other like I did with the baby's feet.
As soon as I got her prints, I set it aside, and we washed her feet off in the sink.  Then later while she was taking a nap and her footprints had dried, I did the baby's footprints in the same manner. 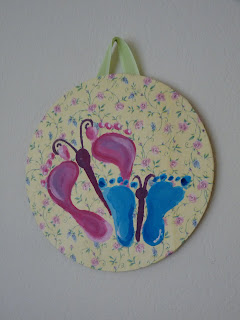 After both set of footprints were dry, I decided to go over them with another layer of paint to add some depth and definition.  I also painted in the simple butterfly body, nothing complicated...anyone could do it!
After looking at it...I couldn't stop noticing the upper right corner is so bare, but I only had one shot to do the kids feet and maybe didn't arrange them the best...I just couldn't think of what I could add to that space without it starting to look to cheesy or something...I had a couple ideas but then decided to leave it the way it was.  What would you have added to balance it out?
Here is a little poem I wrote and attached to the back of the plaque on card stock. It's from the point of view of a little grandchild exploring their grandmother's garden, in their own world just observing the details.  The gardens of grandma's are always a special place to explore.

Yeah, she takes after me with the high arches! I've always needed to put inserts in my shoes for added arch support/

This is such a cute idea!!!

I am a stay at home mom of 6 and I make the cutest hand/footprint plaques in ceramic-I also do butterflies! Check out my stuff at http://www.handprintlady.blogspot.com and click on butterly tag on the right side to see MY butterfly footprints! You can order a mail order mold kit for me to do this for you!

Love it!! What a beautiful keepsake!