Realigning Lives with The Way, The Truth and The Life...


Today I would like to introduce you to a local ministry called Seasons of Life.  Our friends there have both been married before and know the pain of divorce, healing, blending families, having a Godly marriage and now work full time helping to heal marriages through one on one or couple to couple discipleship to counsel individuals and couples to heal, grow and succeed in their relationships by putting Christ at the center.

When they felt the Lord calling them to full time ministry, they were obedient and jumped in trusting God for provision.  They got rid of many possessions, moved to a smaller home and live a simple, happy beautiful life serving others.  They to me are the epitome of the verse Luke 21:4 For all of these have cast in whatever excess they had into the place of God's offerings, but this one from her want has cast in everything that she owned.”  They have given everything, even their daily lives to serve the Lord by being available to serve others.

Here is more details about what this ministry does from the website.

1. Discipleship – weekly, monthly, or quarterly meetings at least 60 minutes in length investigating 3 basic questions:
2. Speak Life – this is a broad category where we serve as the hands and feet of Christ through food, clothing, and personal care items distribution. But, in the past 5 years it has also extended to putting a homeless family up in an extended stay hotel, providing fuel for single moms, Christmas trees for families who would not otherwise have one, marriage retreat and youth conference sponsorships for troubled marriages and needy teens. Anywhere that a little life is needed to bridge the gap from one challenging season to another have been places God has called, equipped, and used this ministry to care for those in need.
3. That Day – A full length, one man show about a guy you might know and the judgement seat of Christ. www.thatday.info
4. Clean Slate – A half day workshop designed to develop a biblical approach to productivity.
5. Uprising – The sum total of our children’s discipleship programming and efforts to encourage home educators and promote development of a biblical worldview.

We have been to the That Day performance and it was awesome to say the least.  If you have been struggling with day to day stresses and need help with gaining that eternal perspective, watching Aarron's one man show will not only entertain and impress you with his endless characters he can play so well all at once, but will help you gain that eternal perspective that will really help with handling the day to day stuff in life with more grace, peace and wisdom.
To get an idea of what the marriage counselling looks like, you can watch "Frank & Ellie's Story" shared by Aarron from Seasons of Life Ministries below

There are so many good causes out there and this ministry is one of them and I just wanted to share because it is not one you will find when searching online for charity's or ministries to give to as it is local and small.
AND If you need help in your faith or in any of your relationships, then contact Seasons of Life Ministries, even if you are not local, I'm sure they would be more than happy to help you by phone or email.  That is what they do. :)

Spring almost 2 years ago we had the opportunity to go to Disneyworld for a couple days after we had reunited as a family and moved to GA...prior to that the kids and I had still been in Nebraska waiting for our house to sell while the hubby was commuting and already working down south so it was a very stressful time and we didn't have much family time for quite a while.  While down there, one of the highlights of the trip for me was going to Babycakes bakery in Downtown Disney.  I was also pregnant with my third during this time along with gluten and dairy free, so being able to walk up to an amazing bakery counter like that and get whatever I wanted was pretty much totally amazing!!!  The Babycakes donuts were awesome.  My hubby who can eat whatever agreed they were some of the best donuts he's ever had.  Not just "good for being gluten free" but actually really GOOD!  They aren't like regular donuts from a donut shop...they are more gourmet and cake-like but all in a good way.   Here is the picture I took at the time of my Babycakes donuts in the pink cake box. 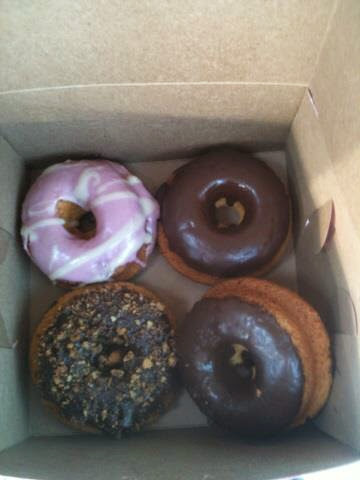 Skip forward to present day, I didn't realize Babycakes had come out with a book until I saw it on my sister's (who is gluten free dairy free and now egg free) amazon wish list.  Since it was her birthday I got her that and made the donuts for her birthday to, and also the chocolate chip cookies the next day.
This is a gluten free vegan cookbook that is simple yet awesome!  The recipes I've tried so far are so easy and turned out great.  The donuts I made for the birthday were enjoyed by all, even the family members who have no food allergies or restrictions. 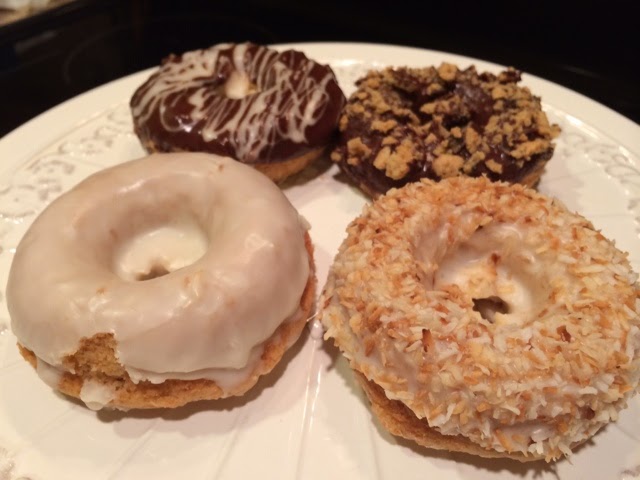 I made plain cake counts dipped in chocolate with cookie crumble topping and others with vanilla glaze coated in toasted coconut.  Only change I made was adding a but if lemon juice to the vanilla glaze because I distinctly remember the lemony flavor my donut had at Babycakes in Downtown Disney and the glaze didn't call for that so I added it in.  I can't wait to make these again and try even more recipes!
Here's a peak at the donuts, some I left with just the chocolate or vanilla glaze in case anyone didn't want coconut or cookie crumble, but I was surprised the kids loved the toasted coconut donuts more than I expected. 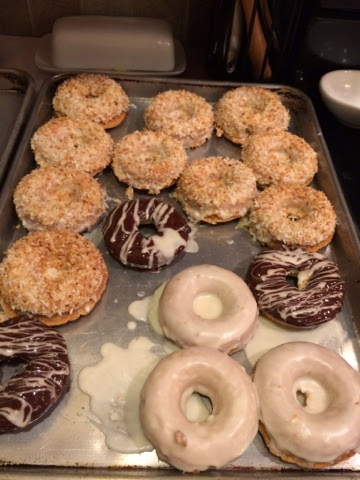 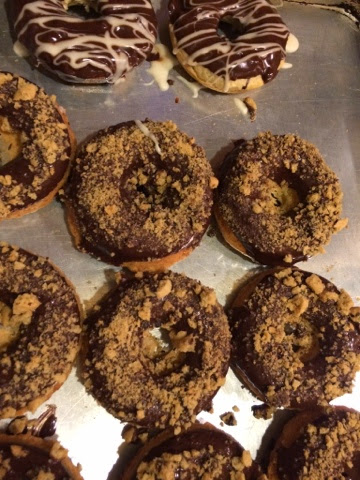 So,  if you are looking for a great gluten free dairy free egg free cookbook whether it's because you're vegan or have food issues that make you require you to make good like a vegan I definitely recommend this book.
The beginning of the book is very informative and instructional as to ingredients she uses and recommends and other tips.
I can't wait to order my own copy, my daughter already told me she wants the vanilla glazed coconut donuts for her birthday.
Posted by Candace @ Candace Creations at 11:59 PM 1 comment:

My mom and I were trying to figure out what to put on her entryway hallway to complete the wall decor.  She had the framed "K" and the family established sign I made her a few Christmases ago but she needed something else to complete the wall, so after some tinkin' we can up with this framed iron rustic key ring mounted on burlap.  The frame was from a collage frame that we took apart, then my mom had some thin plywood stuff leftover in the garage from her kitchen renovation and so she cut that to fit the frame, then put a layer of thin quilt padding under the burlap and hot glued it  on the back. 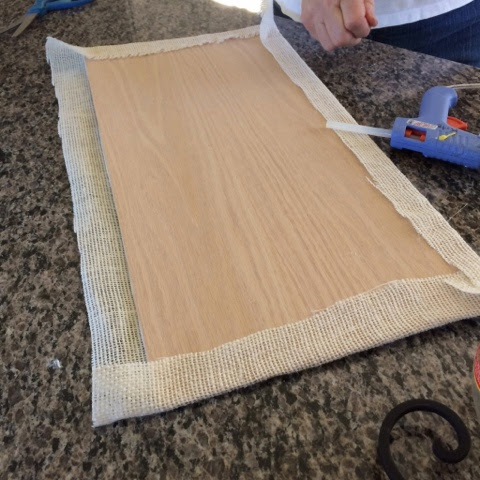 Then mounted the iron key hook with small screws.  We colored the heads of the screws with a black sharpie so they blend in. 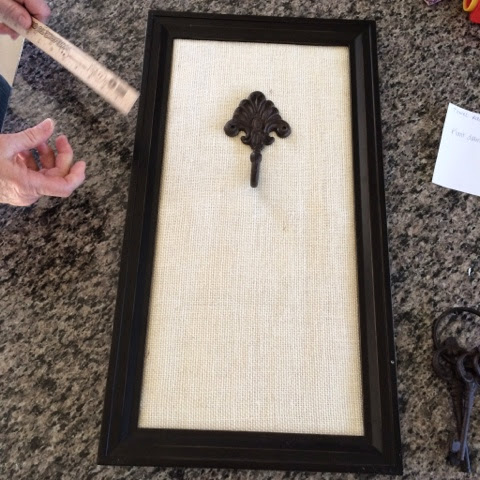 Then hot glued around the inside edge of the frame to secure/mount the thin plank of burlap lined plywood in.  We had to glue a small strip of quilt padding to the back where the tips of the screws from the hook had poked through a little... 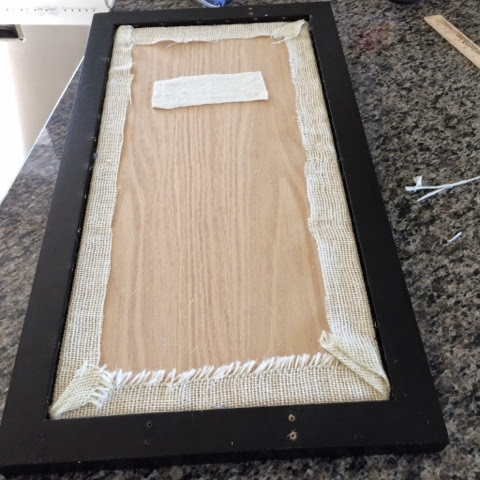 Then hung the large old fashioned keys on the hook and tacked down each key with a little hot glue to spread them out. 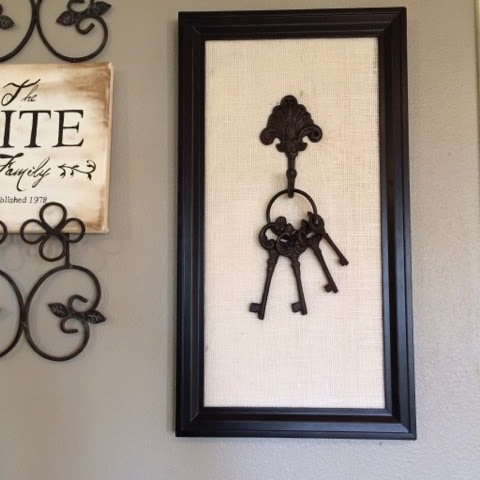 And here is the completed hallway wall... 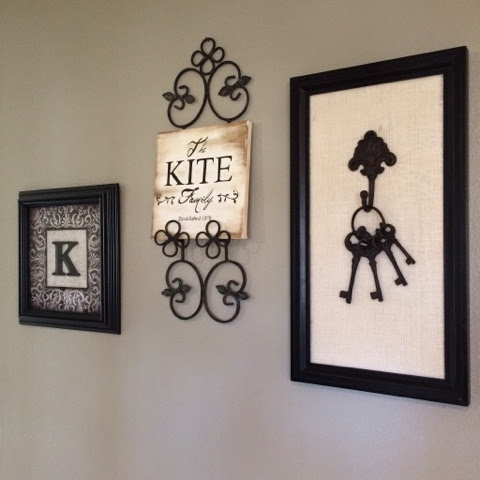 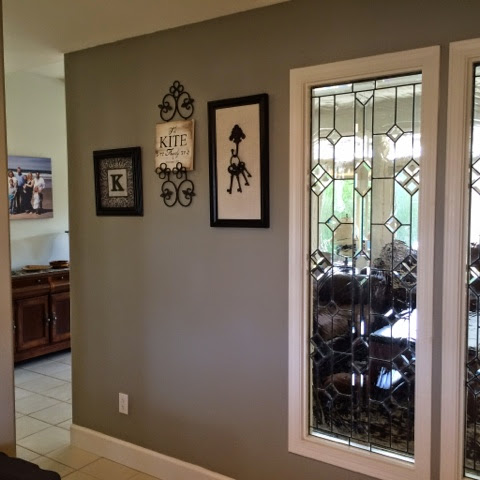