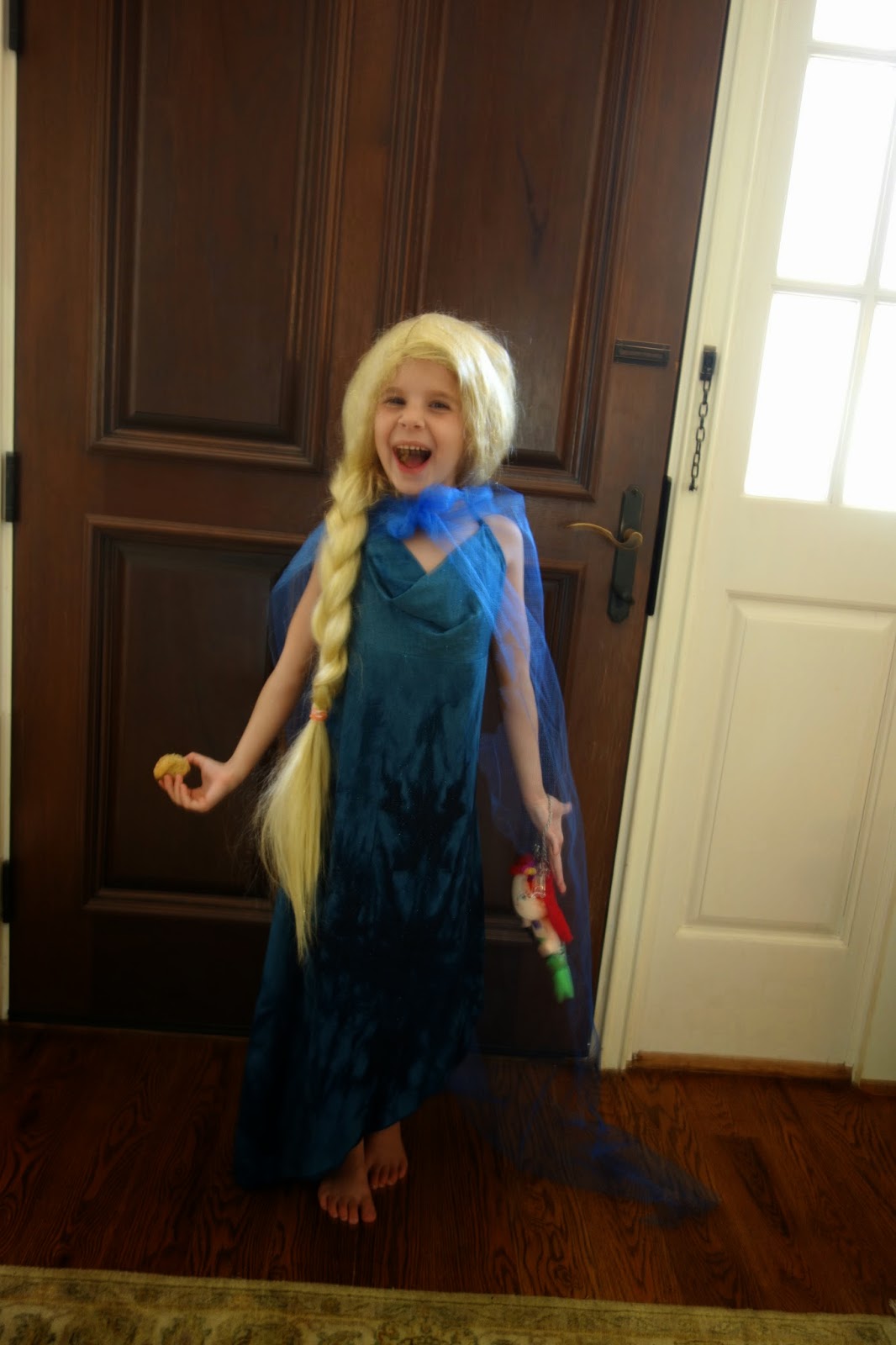 Of course she is singing in this picture, how can she NOT be singing Let it Go when looking just like Elsa ;)

We had a Frozen themed birthday party to attend this past weekend and J and I decided to get resourceful and see if we could come up with an Elsa outfit with what we had.  We brushed out her seriously tangled Rapunzel wig and gave it a side braid, threw on this old sparkly dress that I had from Highschool winter tolo or whatever that dance was called and I just never got rid of it, and some blue tulle/netting from her peacock costume 2 Halloweens ago.  She was pretty happy with it!  For the dress I just tied up the straps in the back so it wasn't falling off of her.  She's pretty excited to discover she had a "real" Elsa outfit and she didn't even know it! 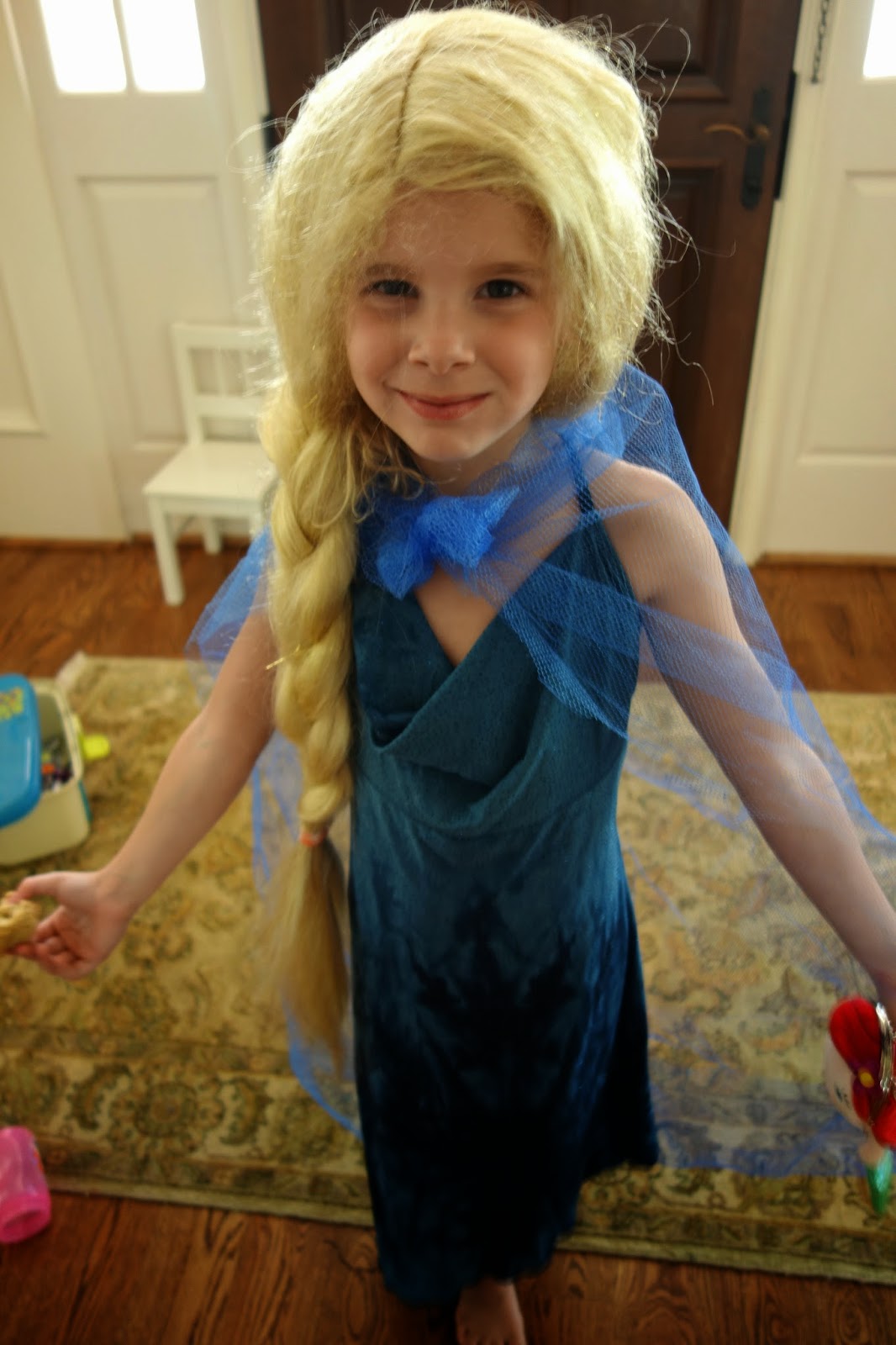 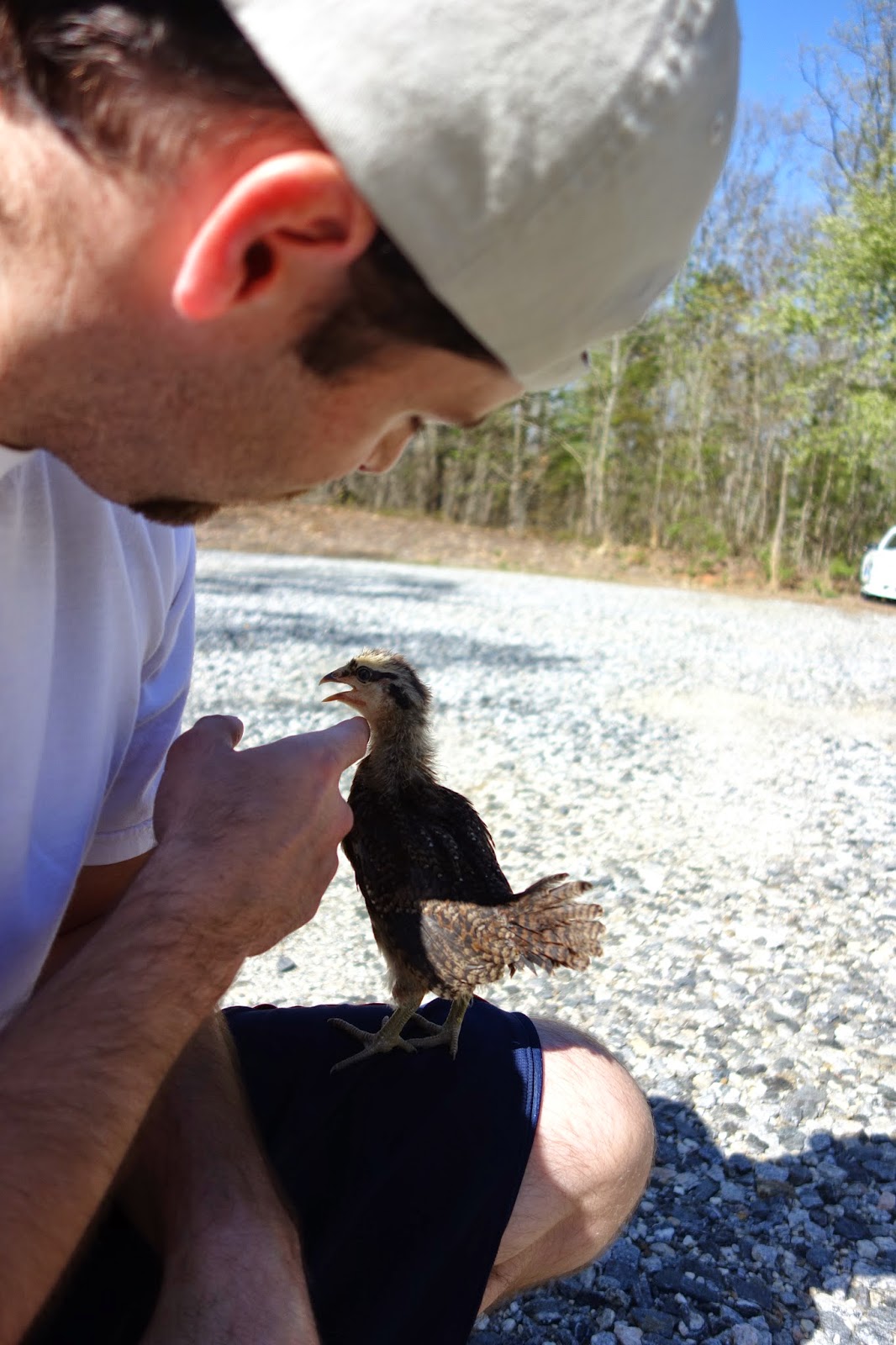 This is Trouble.
See that tail? My kids are determined that means it's a rooster-which would be disappointing, we were looking forward to blue eggs!

So here are the chicks at around 3 weeks old.  After talking to a local farmer who raises chickens and other animals that also is part of our local Classical Conversations group was talking about getting her chicks out on pasture and mine were a whole week older so it was warm out and we gave it a try. 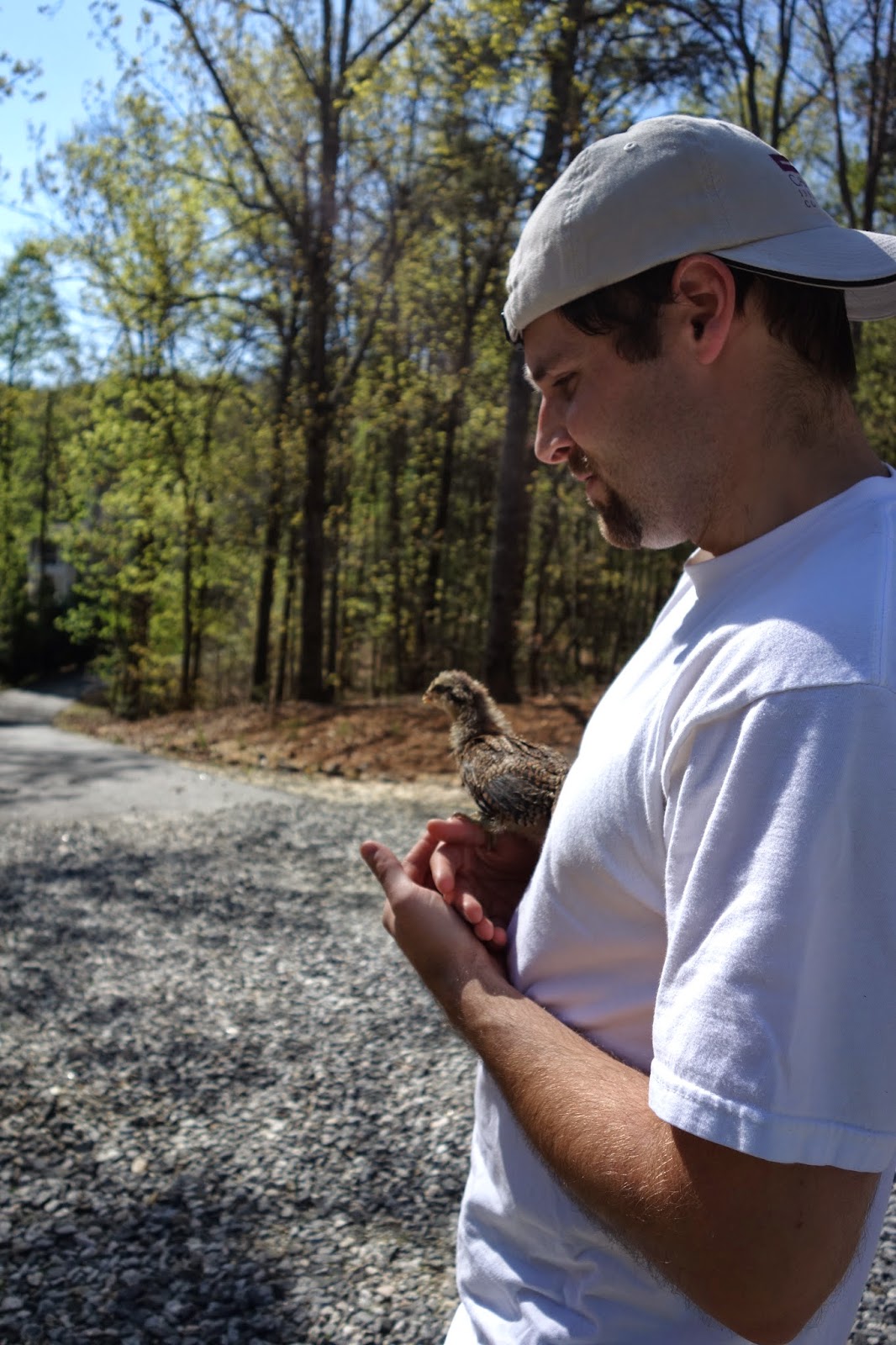 I first took Trouble out and tried to put him/her on the grass....that chick was REALLY chicken and scared of the grass...Trouble kept jumping back up onto my lap and chirping at me like "Save me mommy!"  When my daughter brought out the other two, the 2nd largest one (Trouble is the biggest) did the same thing, flew into my lap and was terrified of the ground.  The runt was the only one who hesitated for a second before walking around and exploring.  After a while the 2nd barred rock was watching the other and decided to give it a try...finally Trouble was like "OK, I'm the Rooster/Top Hen around here, those 2 are making me look bad I guess I'll try it out"  So he/she hopped down, tried walking on the grass for a few seconds and then got so terrified, he/she flew up towards me, landed on the back of my hand and then RAN flapping it's wings al the way up my arm and onto my shoulder, where Trouble then immediately pooped and it landed right in my lap....which I quickly shook off my dress but BUMMER because I have to wash that dress by hand!  ugh!  But in any event, the whole thing
was quite amusing. 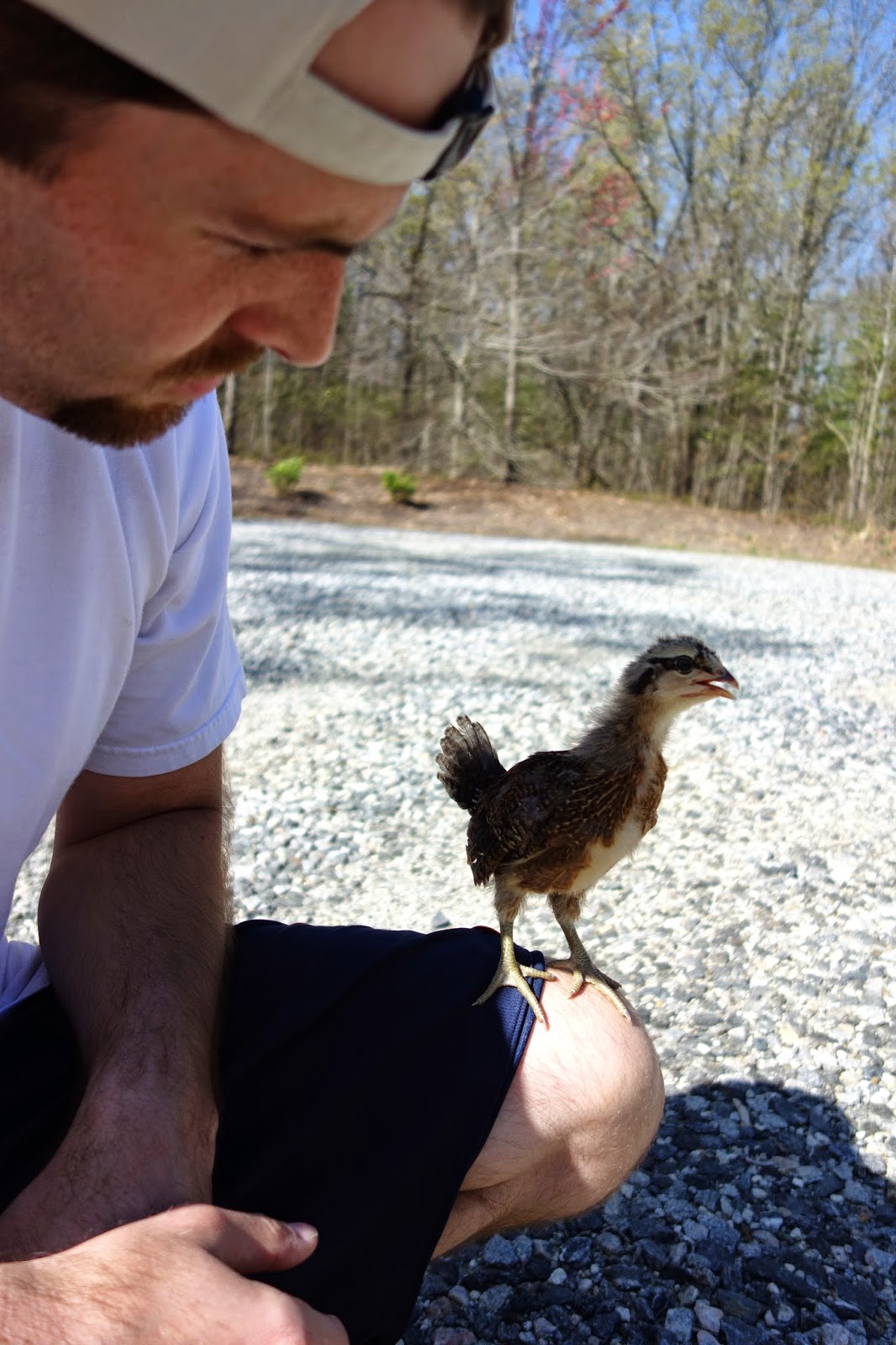 Tyler, my hubby is definitely the chick magnet.  They like him the most, but he likes them more than I do too so I guess it's mutual.  Don't get me wrong, I like them well enough and think they're cute...I'm just not real comfortable/natural with animals...I had some hamsters growing up and a dog that was untrainable and a horrible pet and some cats that I really enjoyed, but I really haven't spent much time around animals in years and being a mom of 3 littles, cuddling with animals just isn't something I even think about.  So anyways, my hubby comes home and sweet talks the chicks, holds them and pets them...the love it.  My daughter also gives them lots of attention and is really good with them.  At night the chicks make a lot of noise, My daughter told them it was time to stop and be quiet...they listened...or so it seemed.  She now thinks she has magical animal powers or something lol, I told her that maybe God blessed her with a gift to be good with animals, not so much "magical powers".

These things grow so fast I can't believe it, By the time I uploaded these pictures they are already outdated!  I was looking at them today and they are really filling out!  Oh and last week when they turned 3 weeks old we picked up 3 more chicks, we got 2 Rhode Island Reds and 1 Buff Oprington...they are so cute and this batch of chicks seems even more friendly and chill than the first.  The Araucana definitively likes attention, but it's a bit more hyper and just different.  The Barred Rocks will let you hold them but they probably prefer to be left alone, whenever my husband is trying to pick them up, The Araucana (Trouble) flies onto his hand...such an attention hog. 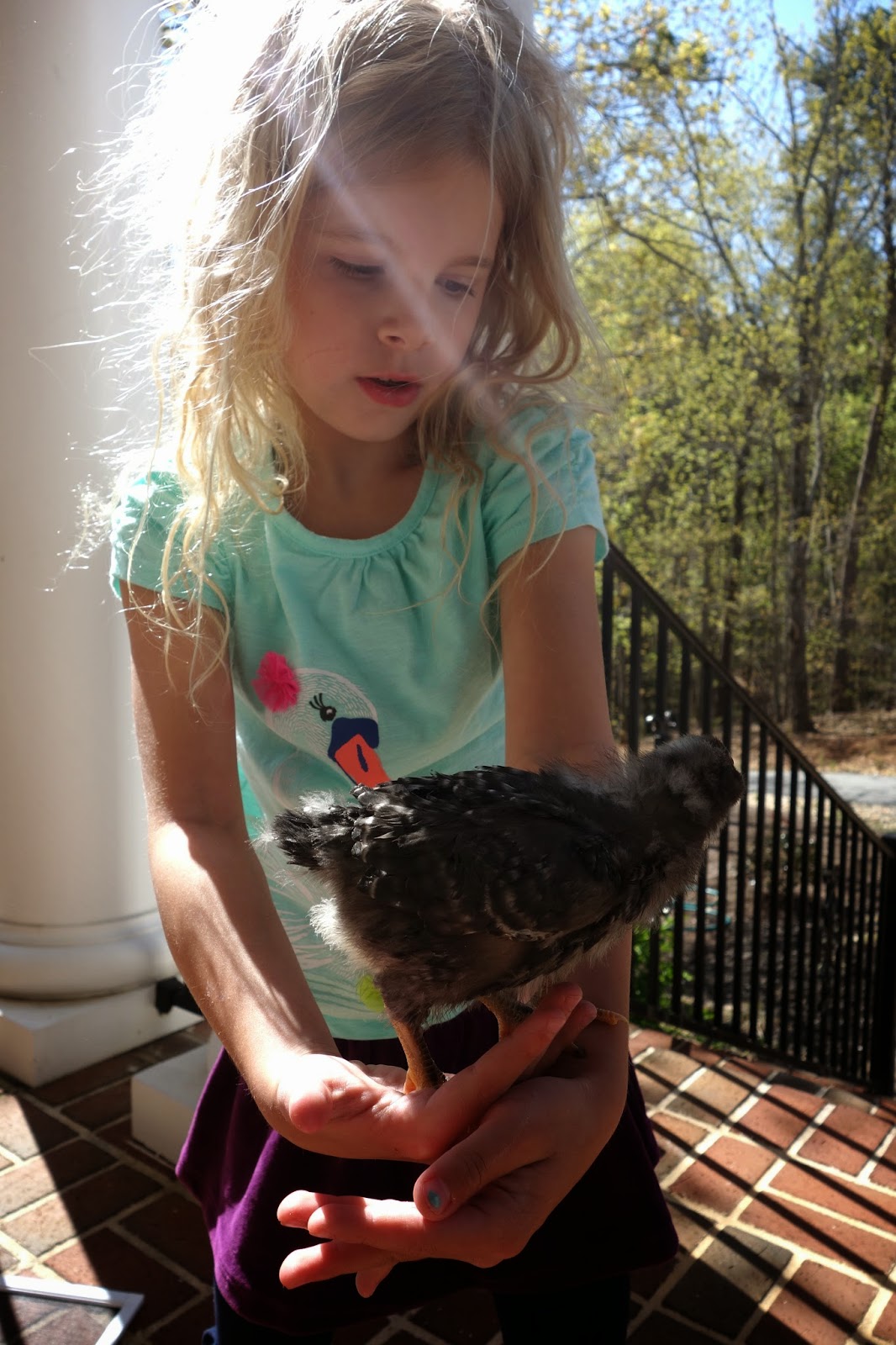 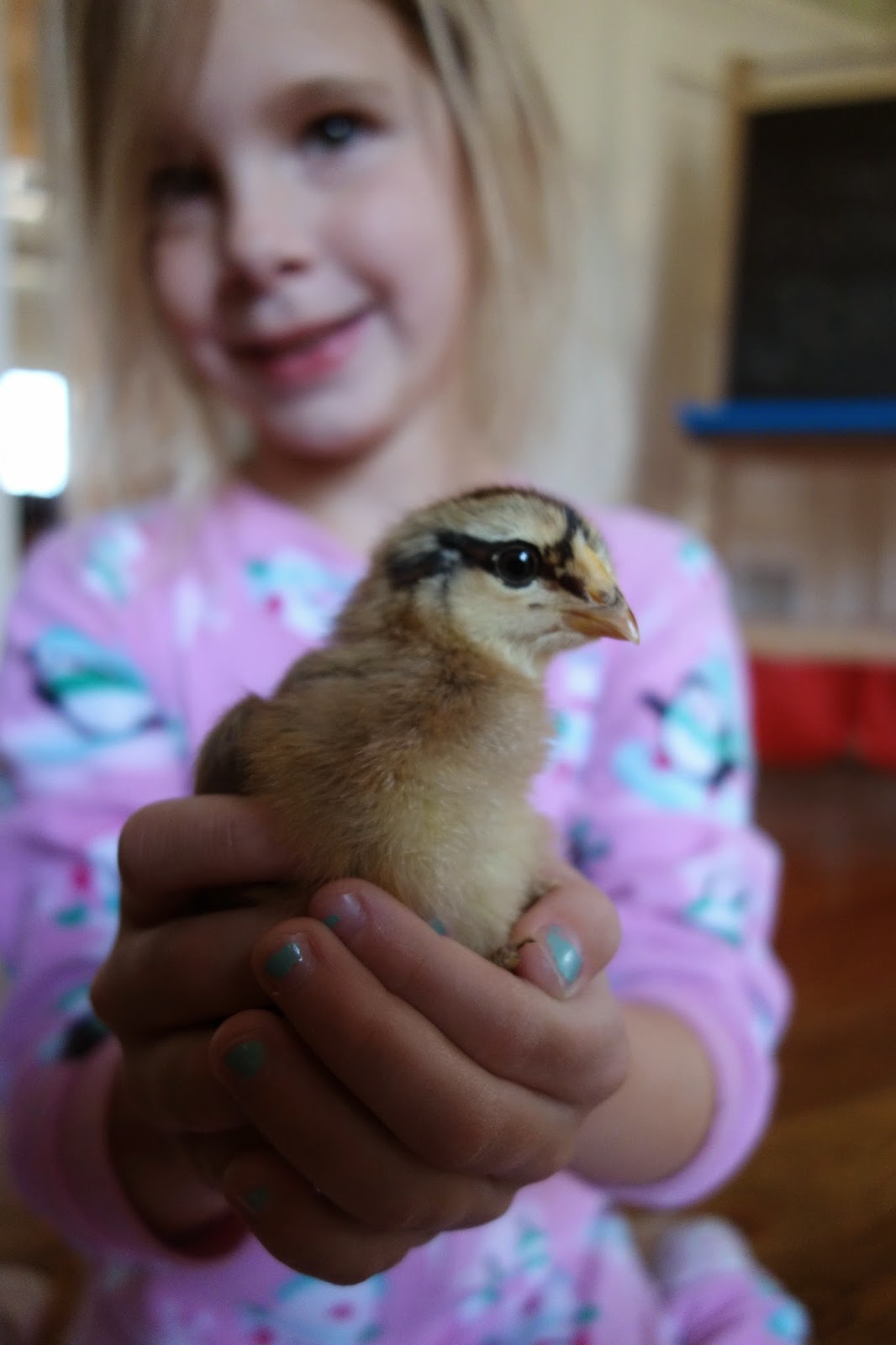 I am pretty sure the chicks were about a day old when we got them so lets just say they are a week old here, I took this pictures on Monday, a week from when we got them :)  They are SO much bigger and starting to sprout feathers and test out their wings!

The brown Araucana is the only one with a name so far, We called her "Trouble" the first day because she was the most hyper and out of sorts when we first set them up in their box.  Last Tuesday J did her presentation at Classical Conversations on her new pet chicks and when she told her class the brown one was named Trouble she smirked and then said "cuz you know...(then started to sing) I knew you were trouble when you walked in...." lol.

So far Trouble has the biggest wings and is the first to test them out..."flying" across the brooder (aka large cardboard box).  Trouble also seems to enjoy being held the most so far as well.  My husband comes home after work, goes into my closet (where they love right now) and says "Hey girls!" and they run up to him and look up at him...then Trouble will step up onto his hand when he lowers it into the box and just hang out with him.  So yeah, I can officially say I don't get jealous when my husband "picks up chicks"...lol ok lame joke but I had to do it :P 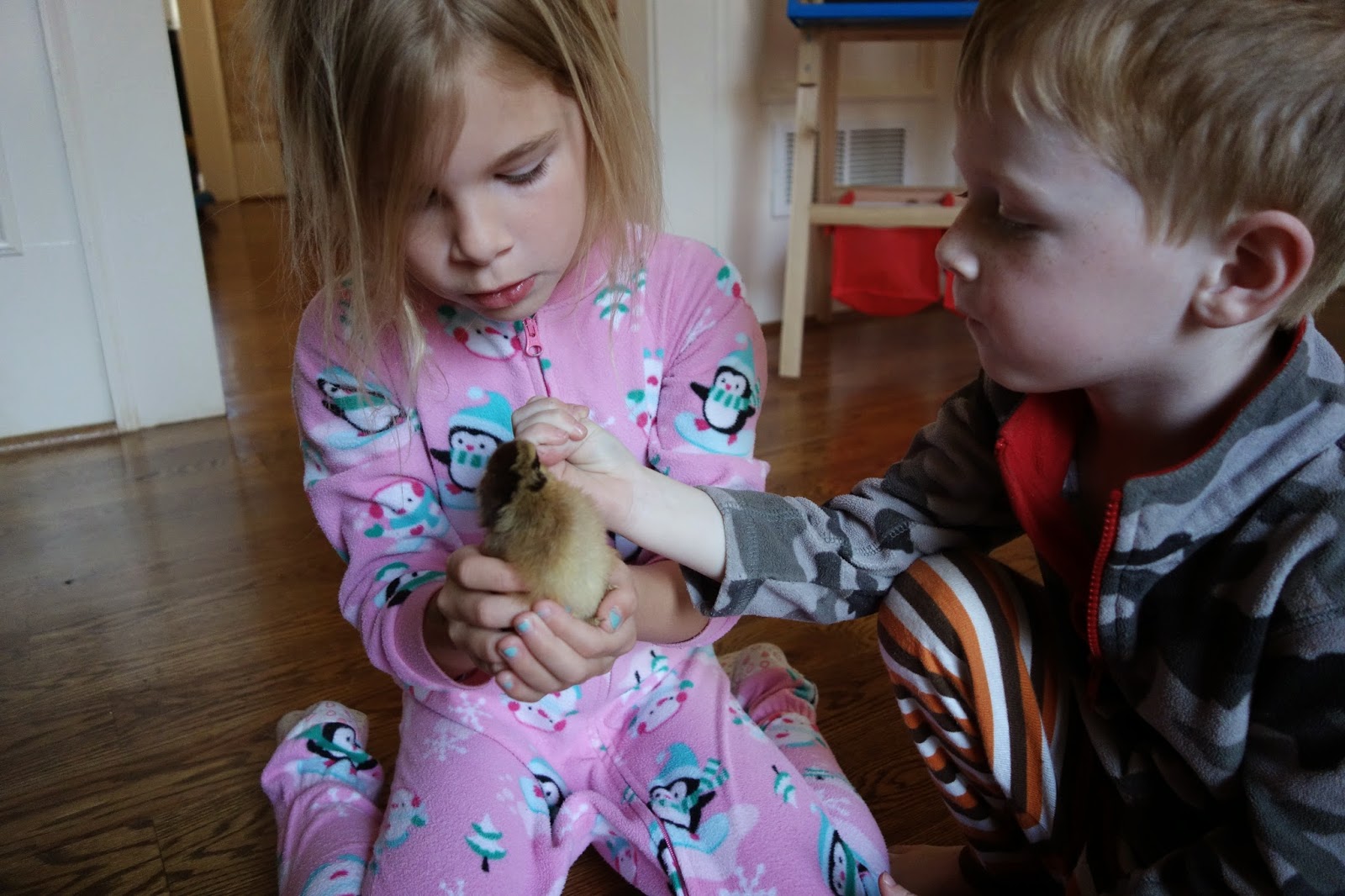 Check out Trouble's tail feathers poking out the back!  If she turns out to be a HE then HE really will be TROUBLE! lol 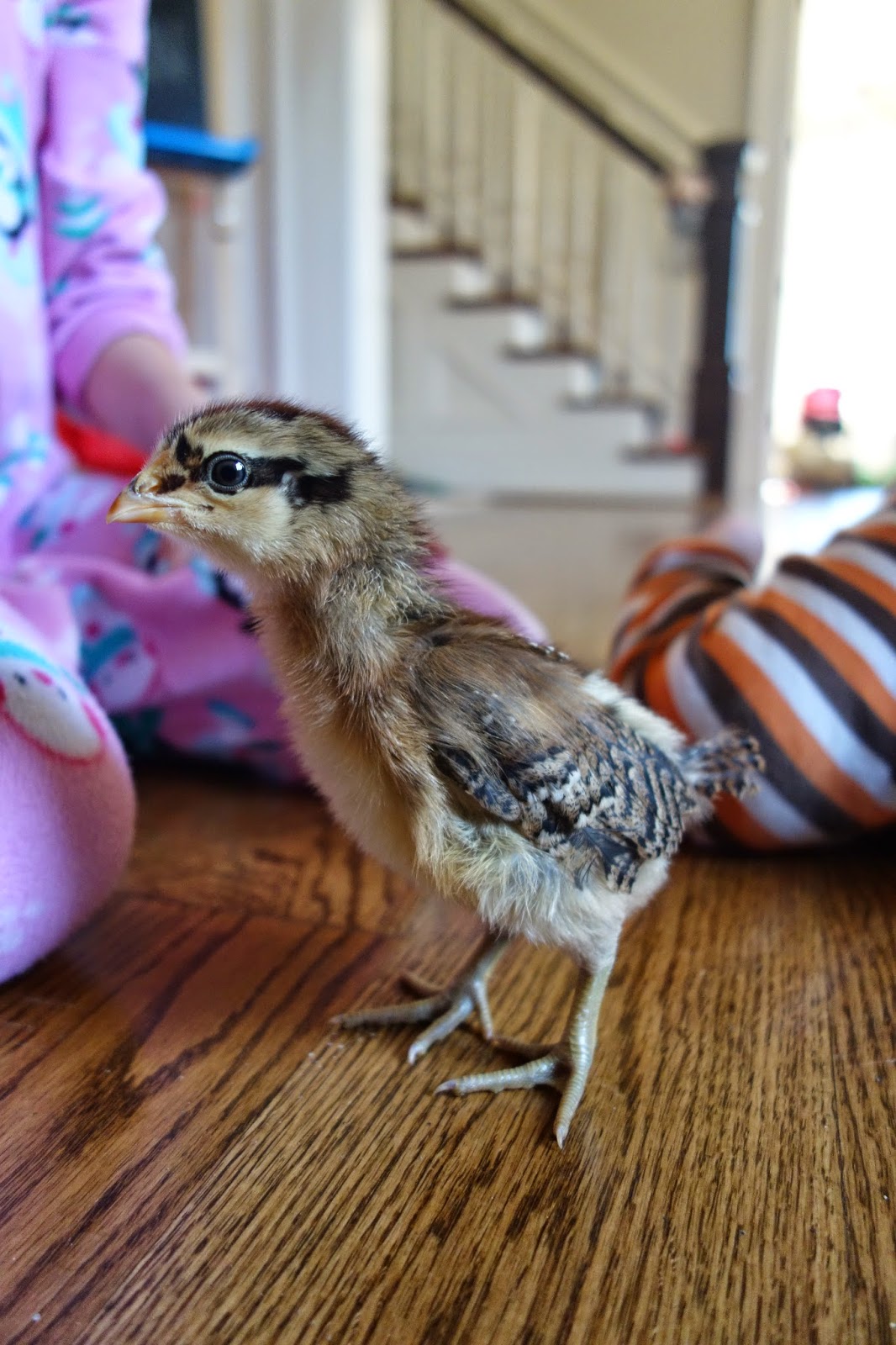 The Barred Rock chicks don't have names yet but my husband's great aunts came to mind the other day and suggested naming them Helen and Margaret, my hubby seemed to like that idea but we haven't actually officially named any of them... 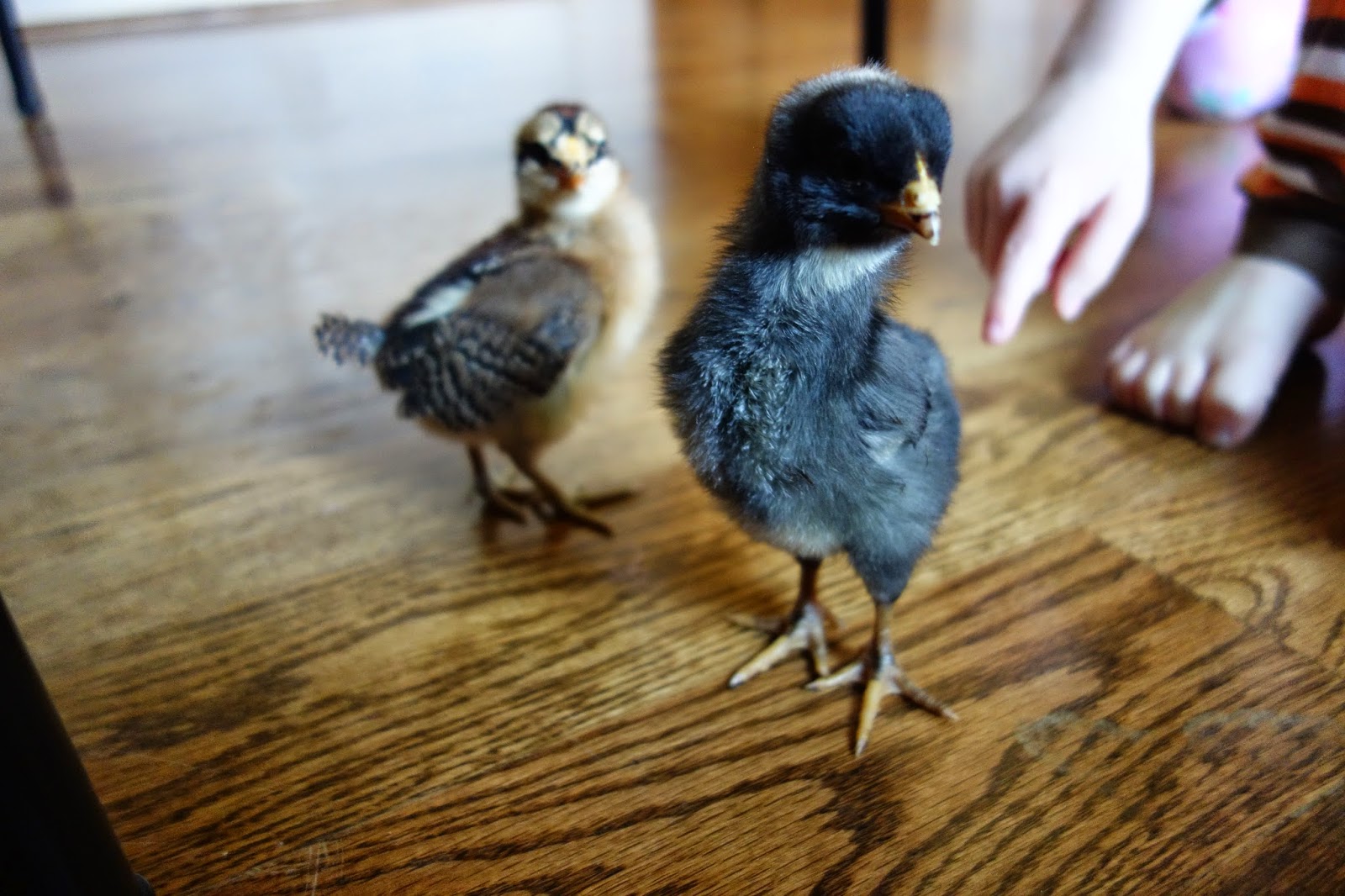 I'm not sure which one it is, but one of the Barred Rock chicks is afraid of the dark...we have to keep a lamp in the closet with them at night because she starts crying when it's too dark.  Our neighbors have a heat lamp from their chicks we were going to borrow but so far we have been controlling their temperature in my walk in closet with a little space heater and a digital thermometer. 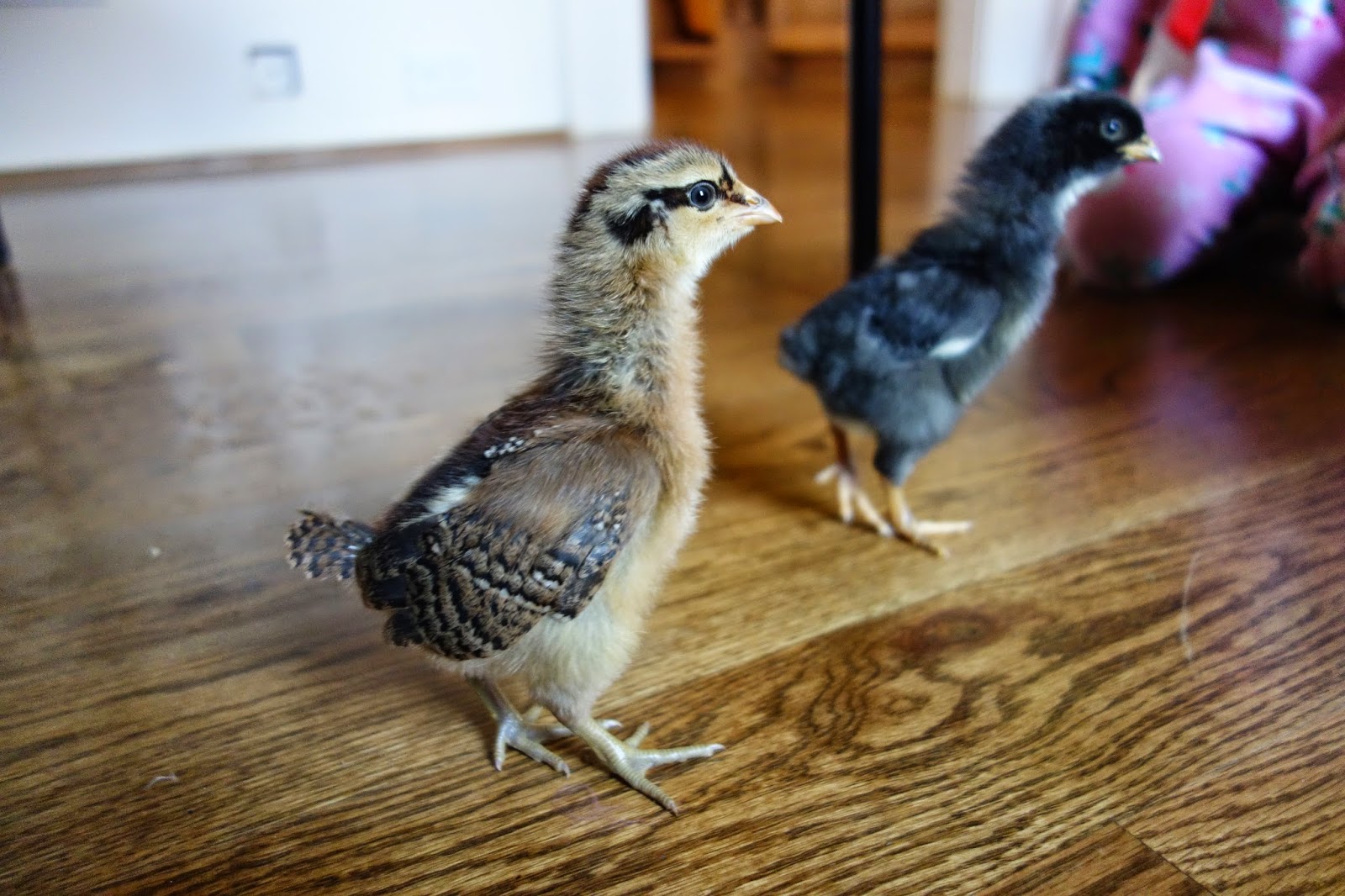 I love that the dark barred rock chicks have a soft yellow underside! 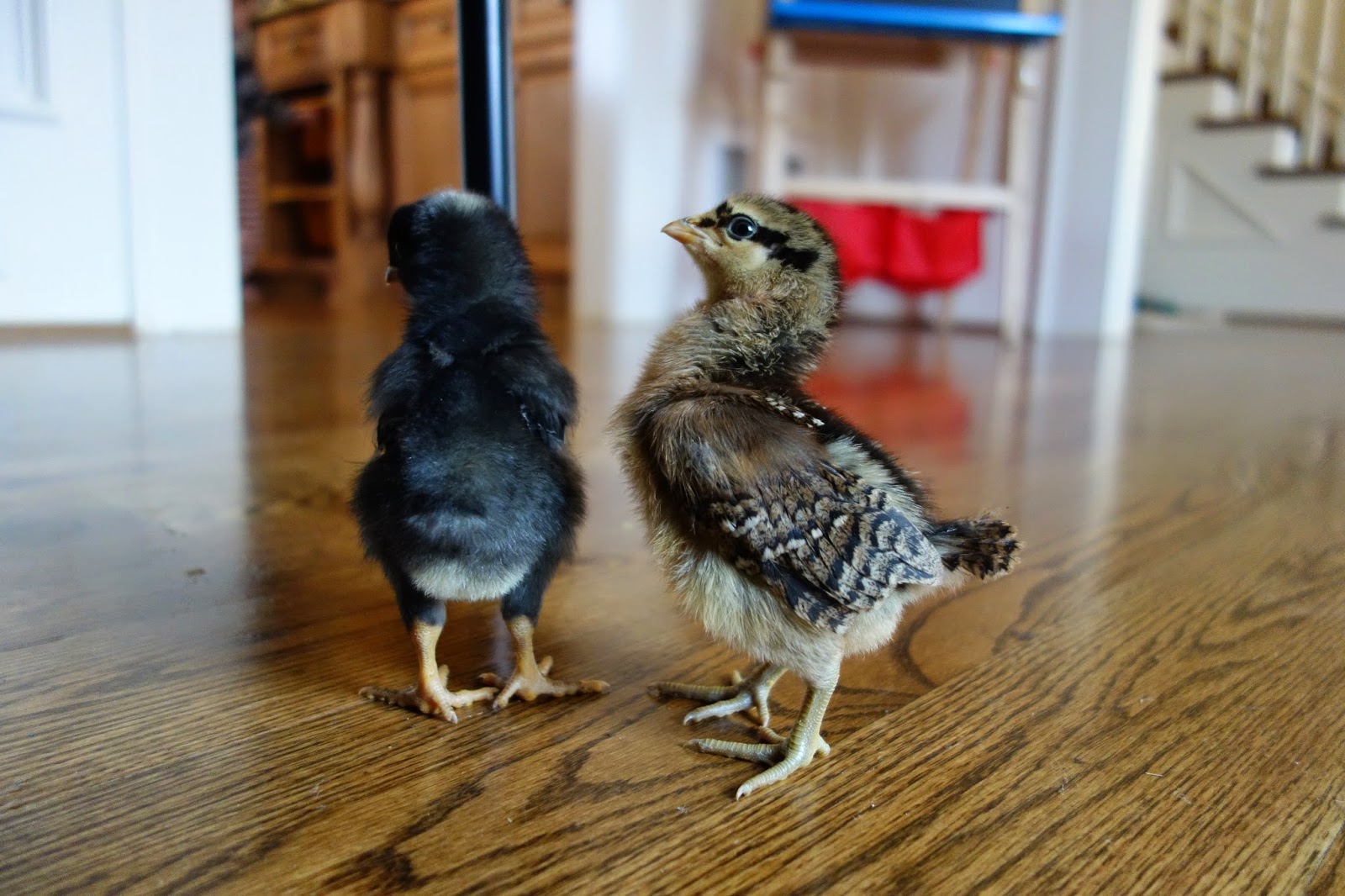 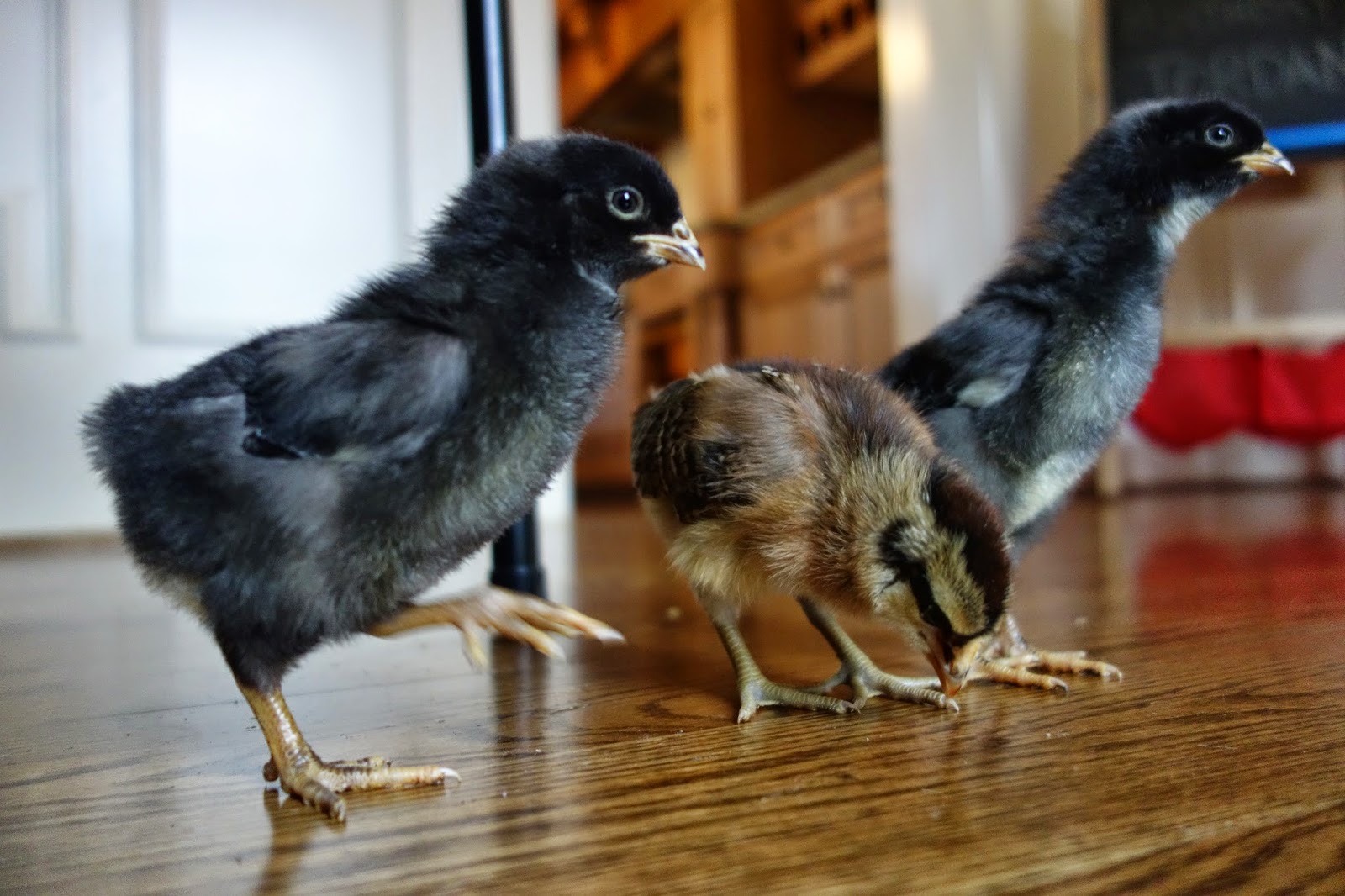 Trouble startled me this morning when I went in there, she was looking up at me and then tryied to fly straight up towards my face...she got pretty high! Not high enough to get out of the box yet though!

I set their water dish up n a brick to help keep it clean and they also seem to just enjoy the brick to stand on and peck at. 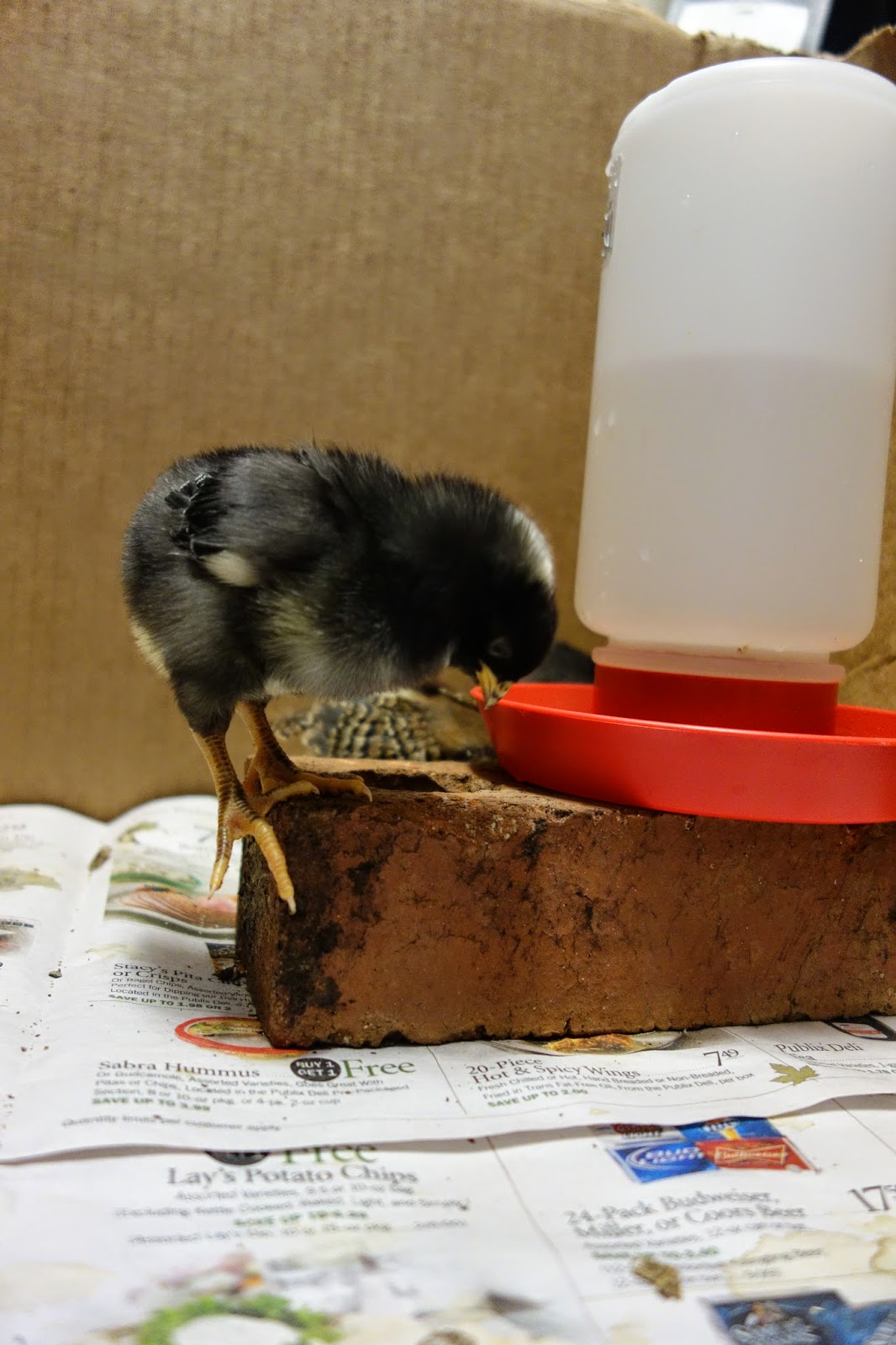 I also put a small branch in there for them to perch on....I wanted them to have some entertainment so I also cut up a toilet paper roll into a couple smaller tubes and then also seem to like playing(pecking) with them.  They do poop quite a bit but Tyler just laid down a bunch of newspaper so each day I just remove the top layer of paper and reveal the fresh paper underneath so it really is no big deal....I remember having hamsters as a kid..This is not any more work that that....actually less with with easy system of the newspapers we have going.  Once they are big and in a coop...I don't mind taking care of that because at least they earn their keep with the bug eating and egg laying! 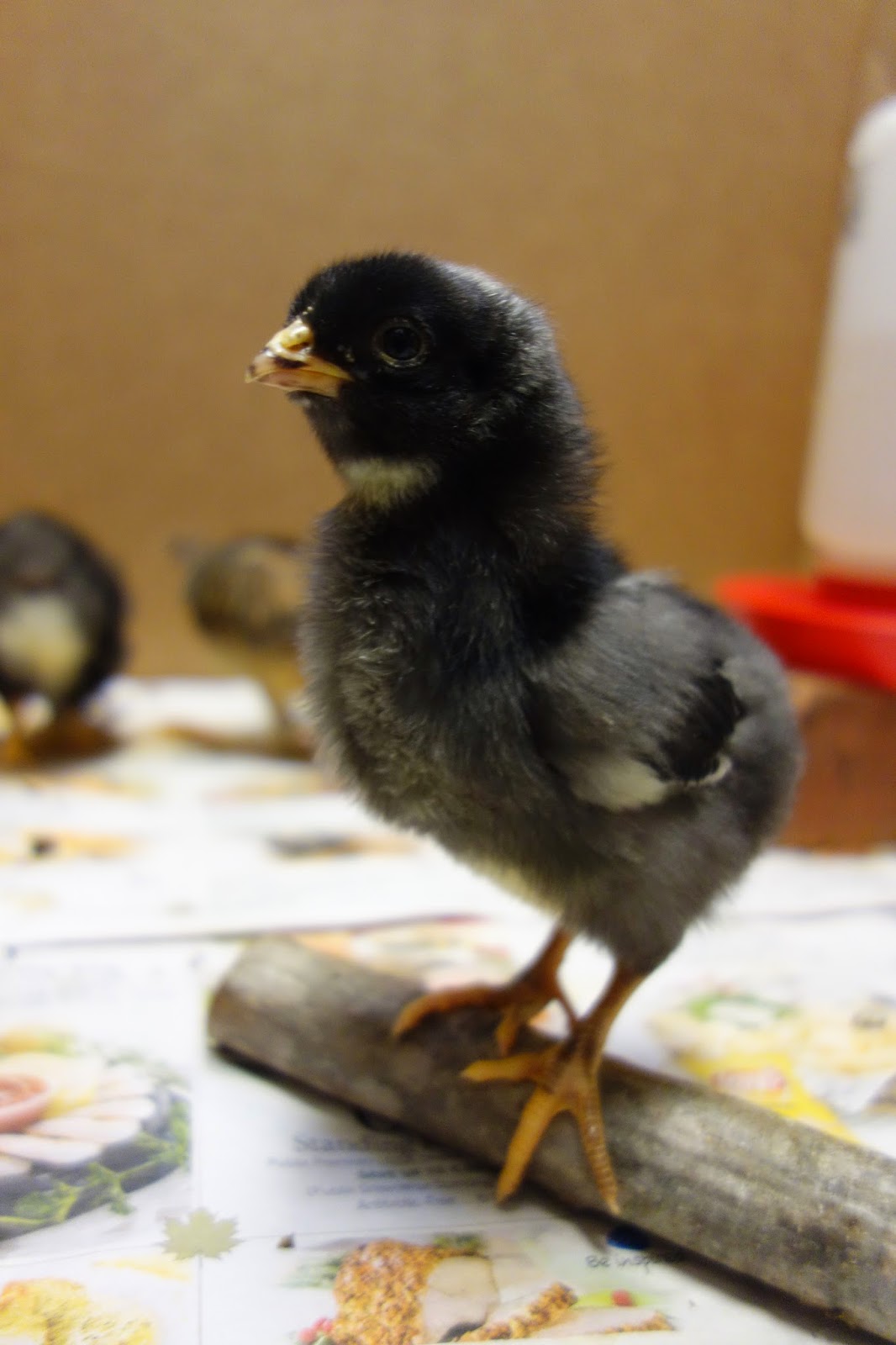