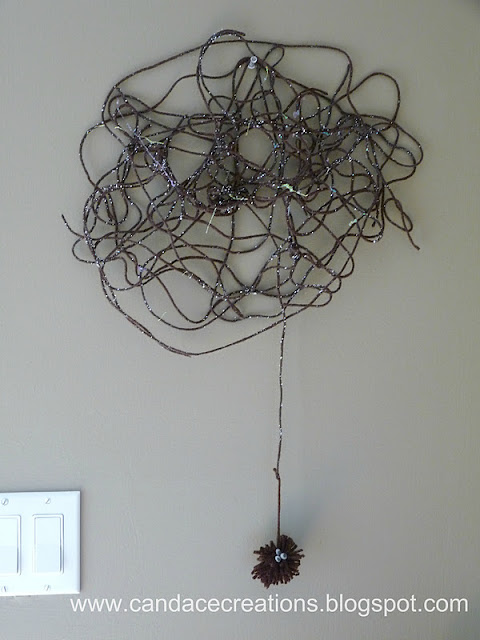 This was a super easy little Halloween project I did with my daughter.  She saw a sparkly spiderweb decoration at the craft store and wanted it but I wasn't trying to spend money on that so I told her we would make one when we got home.  We had some dark brown yarn so I cut the yarn into long strips and dipped it in glue and let her drop and arrange the sticky strands of yarn to create her spiderweb out in the garage on some cardboard.  When it was done but still wet, she sprinkled it with glitter.  It was her idea to have the long strand hanging down for a spider so I helped her make the spider, I made a pom out of the yarn (learned how to make those from the Mondo Pom Pillow Tutorial by Living with Punks) I meant to leave some longer strands of yarn for legs when trimming but oh well, kids think it's a good spider! :P  We had 3 goggly eyes so J put those on and we left one long strand and tied it to the spiderweb.  This was  a fun halloween activity for my kids, they had fun and J keeps asking to make more spiderwebs and spiders but we are out of glue!  Oh she also decorated it with her neon glitter glue sticks.

When the glitter spiderweb was totally dry the next morning, we just carefully peeled it up off the cardboard and hung it up on a tac.

This is such a sweet idea- love how it turned out! I am visiting from Momnivore's Dilemma and I am a new follower!
Hope you have a great weekend!
Michelle
www.delicateconstruction.blogspot.com

This is awesome! It turned out really cool! :)

I am visiting through the Friday Blog Hop on 'Mama to 4 blessings' and just followed you on GFC :)

Aww, too cute and artsy too! I love the eyeballs on that spider. ::smiles::

That is adorable and kids would have a blast with this you are so right! Love it. Thank you so much sharing and for linking up to our party Show and Share this week! Come on back this Wednesday to link up your current projects.

A mommy's life...with a touch of YELLOW
tyandwhitneyulrich.blogspot.com