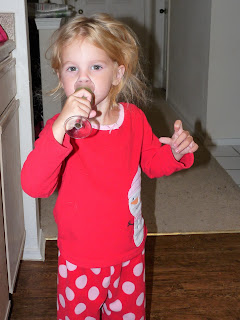 Well, I'm a bit excited today because I just got my 3 year old to eat spinach for breakfast, something that she NEVER eats.  I've seen various Green Monster Smoothie recipes online and then just kind of whipped one up this morning.  So today for AEDM, was the art of getting your kids to eat veggies, even it you have to trick them!
Green Monster Smoothie
1 cup frozen spinach
5 frozen strawberries
1 banana
apple juice
soy milk
I put the spinach in first with the soy milk to get that blended first, then added the strawberries and banana.  I just kept added soy milk and apple juice until I got it to the right consistency.  I poured it into a fancy little glass for my daughter and told her to it was a funny green monster drink!  HOW SILLY! After making it sound fun, she was still a bit skeptical, and said "I want a pink monster drink" but then I started drinking mine and it was good!  I exclaimed "MMMMM!  STRAWBERRRIES.....and.....BANANA!" Once she gave it a try, she was sold because it was good.  And then we wanted Daddy to know about our funny yummy green monster drink.  I also fibbed a bit and told her it was green because I put a green apple in it.
Anyways, I still can't believe I actually got her to have SPINACH at breakfast! 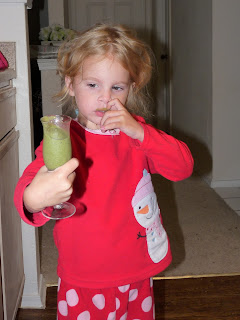 Looking a little skeptical here....
but she ended up drinking it all and then taking mine and finishing it for me.

Posted by Candace @ Candace Creations at 8:31 AM

woohoo!!! Try freezing them too for popsicles...my boys love spinach that way too! :) Of course I tell them "YOu have to eat your lunch before having your treat" which is a spinach popsicle! ha. They think its a huge treat!

What a great idea! Why didn't you tell me about these spinach Popsicle and smoothies sooner! LOL! A Spinach Popsicle is a great idea, and in that form the green color probably doesn't throw them off as much since popsicles come in all colors!

That is awesome! We do one of those at least once a week. So healthy!

Yeah, I guess we were slow getting on the green smoothie train! I was just reading the wall street journal a bit this evening and an article based on university research suggested cooking bitter veggies with a small amount of sugar, like half a tsp, seems to make them more acceptable to kids...even after you stop cooking them with the sugar, they kids like them more.

I am going to try this with my supper tonight.
I have some spinach (I already cooked it, but I am going to use it anyway) in the fridg that I need to use up, plus I have a banana and I think there are strawberries in the freezer. I bet it will really taste good.

Let me know how it turns out for you! I'm sure you could handle it with pleasure if you can handle that olive oil lemon drink I saw on your blog!!! :)