Wrapping Up Ancient Greece and Rome

Today is our CC day but I had a few more activities related to Ancient Greece and Rome that I didn't want to skip so we did some of those today before introducing our new memory work for week 7.  I can't help but blend the weeks together and carry over into the next because there is so much you can do!  For example, we studied Greece and had a Greek dinner while we were starting to learn about Rome.  After learning about the olive tree and Athens and Greek Olive Oil, at the grocery store we walked past the olive oil section and noticed the Pompeiian brand and then we stopped, I covered the "an" at the end and had my daughter read it...then the light bulb went off..."Pompeii!!!  That's where those statues from the volcano are we saw in the DVD about Rome!!!"  So then we talked about how Olive trees and olive oil also comes from Italy.  Another thing the Greeks and Romans had in common.

(The DVD I'm referring to is this one from the library by Slessinger).
We also watched the one made about Greece I mentioned last week and one about Map Skills, my kids are loving these!  We watch them with our big MAPS book across our lap and reference the points in the video with the illustrations, landmarks or cities in the map page. 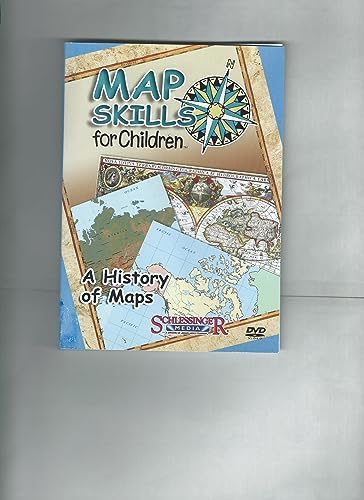 The kids watched the map DVD while I was in the shower and when I came out they were almost finished making their own maps, I thought it was so cute! 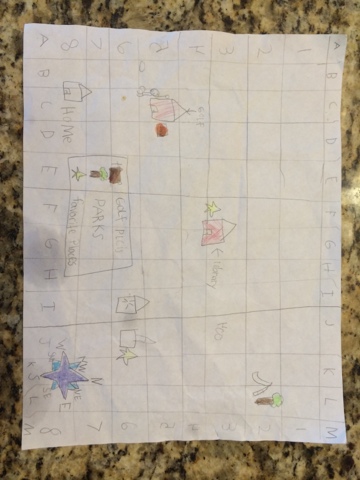 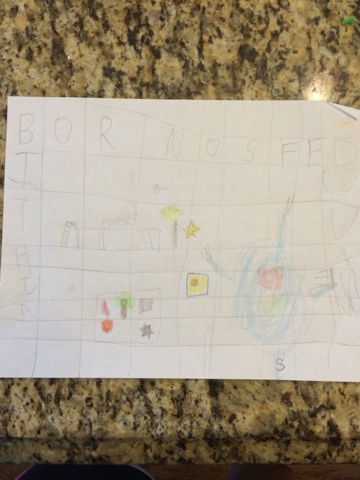 Over the weekend we ended up making a huge map on the driveway with sidewalk chalk for them to ride bikes and scooters on.  A big road with different landmarks and destinations along the way.  My 5 yo son decided to draw Mt.Vesuvious on the map and next thing I know I look over and thought my daughter had fallen off her scooter and asked if she was OK, her reply was that she was one of the statue people in Pompeii that the volcano got.  I love how what we learn or read about during our time together gets translated into their playtime! 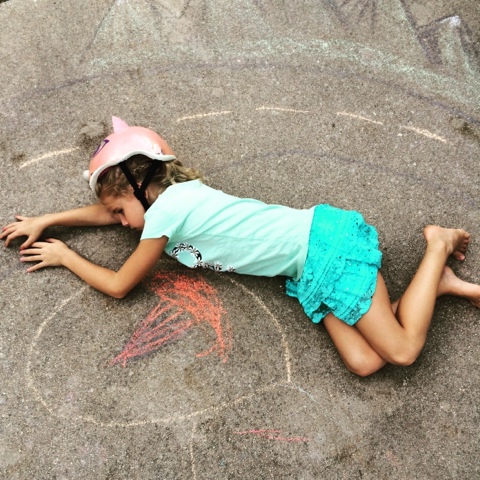 We started reading the Magic Tree House Vacation under the Volcano book last night and will finish tonight. We stopped right when Jack looks at the sundial and realized its noon because of where the shadow is pointing and now tonight we shall find out how they escape the eruption of Mt.Vesuvius!  So after reading that, this morning I decided to teach them about sundials and Roman numerals.  We did some simple fractions to properly space out the numbers on our clocks, first dividing it in half and making the 12 and 6 and then dividing it into quarters and adding the 3 and 9.  Then they were able to easily place the rest of the numbers. 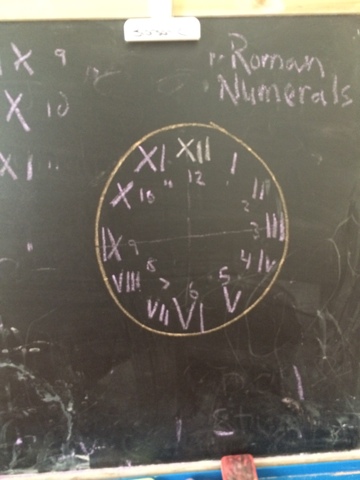 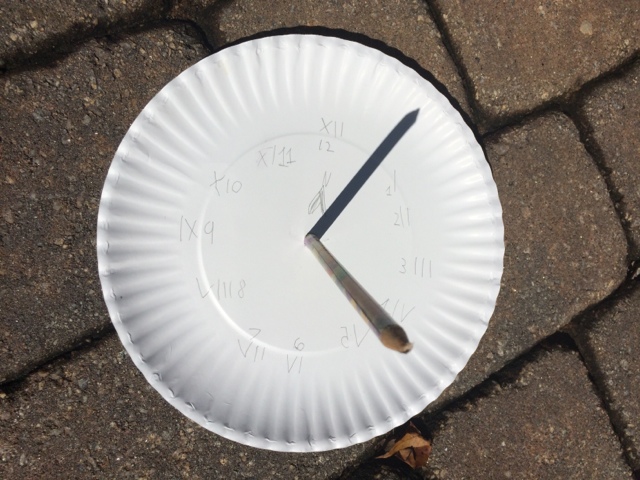 After checking the sundials throughout the day and finding the time matching up roughly to the actual time, the kids were convinced it was magic! I said "not magic, it's science and they figured it out Alllllllll the way back in ancient times!"

For some spelling/reading practice for the kids we've been doing these little picture crafts together...focusing on a certain blend or sound and then listing words that have the same thing and then my son copies the easier words and my daughter writes to more advanced words then we put it together.  I had the kids highlight the "un" in each word.  We used this as an extension on calendar time since the weather is sunny and also went along well with the sundial project!  It's good for my early reader to understand phonics and it's good for my daughter who reads great but forgets these things when it cones to spelling. I'm consolidating his read and her spelling with activities like this.  We hang them up to have for future reference. 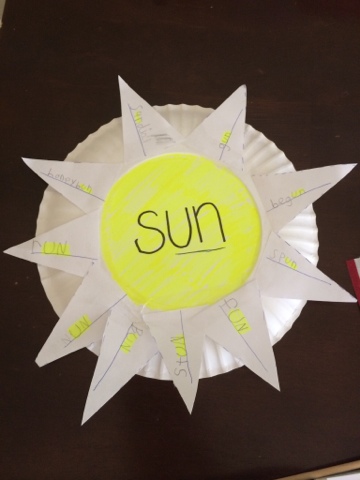 The Magic Treehouse books are the icing on the cake when we finish learning about a certain time period as Mary Pope Osborne dose a great job tying it all together and my kids hang off the edge of their seat with full attention.  My daughter told me this morning how much she loves the Magic Treehouse Books because she feels like she's in the story and there with them and like they are talking to her!

For bible/character/art journaling/copywork in one today we used our big book of five minute devotions.  Then we talked about examples how we could apply that verse in our daily life and the kids copied it into paper and drew pictures of kittens and other things we should be gentle with to remind us if how we all need to be treated gently. And of course being siblings they got more practice and reminders of this verse throughout the day ;) 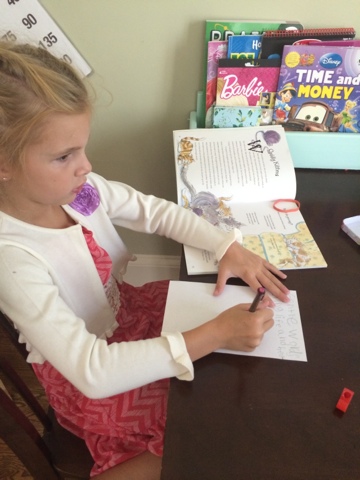 My daughter drew all the pets we've had, things she's had to treat gently and care for. 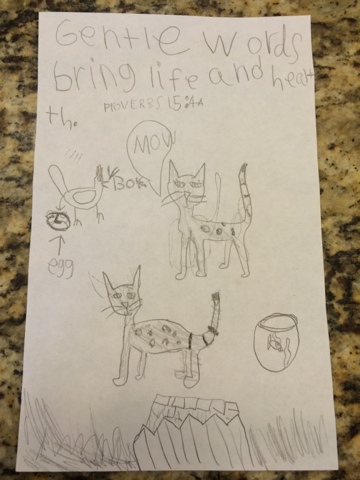 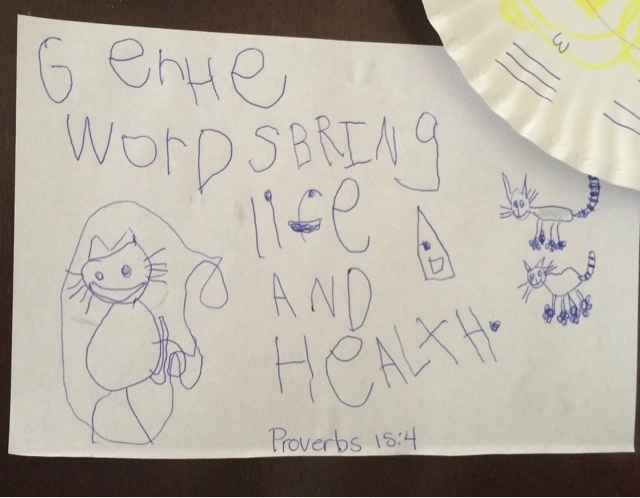 We then talked about in the ancient world, they had coins and stamped them with images of their leaders and rulers, like how today our coins have presidents on them.  We looked at some ancient coins in my Art History text and then I told them to find a toy they wanted to use as the "leader" in their pretend world to make our own coins.  Then we made a Roman Numeral to stamp on the back. This was a lesson in coining money but also in sculpture and how to make a mold to cast art or other images.  We used a glue gun to make a rubber mold.  I made a pile of hot glue and then we pressed the toys face into the hot glue and let it set til the glue hardened.  My kids thought we just destroyed the toys! 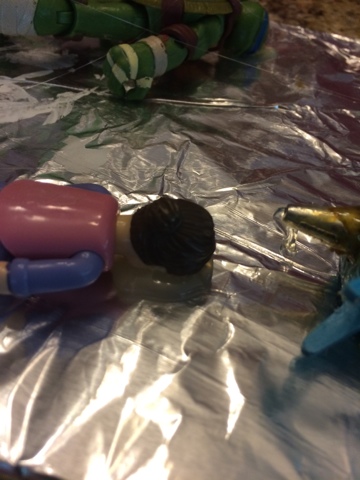 Carefully peel the rubber glue mold off the toy.  This was fun because I knew my kids would think it didn't work.  They looked at the rubber mold and said "it looks like nothing!" And then I brought out some play dough and said "go ahead, stamp your coin..." They were suspicious but when they pulled up the mold and saw the face on the front if their play dough coin, they were sold!!! More magic tricks!!! Lol! 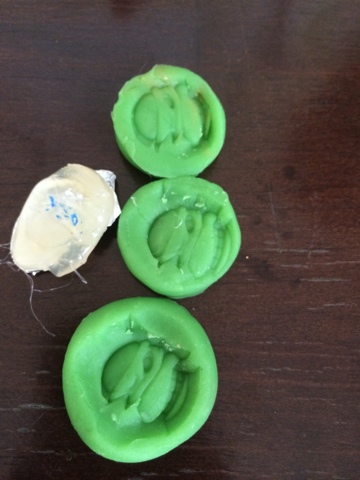 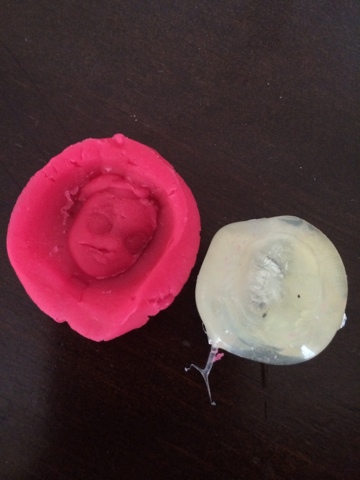 Then we made a Roman numeral X with a tiny amount of play dough to make the coin worth 10 cents (that's what the kids chose).  We covered it with hot glue and let it set.  When done we carefully removed to tin foil and play dough that was stuck to it and then I showed the kids how to stamp both sides at the same time, the way they stamped both sides of coins long ago and today!  If you do one side at a time it ruins the side that's already done!

Play dough x covered in hot glue that has dried. 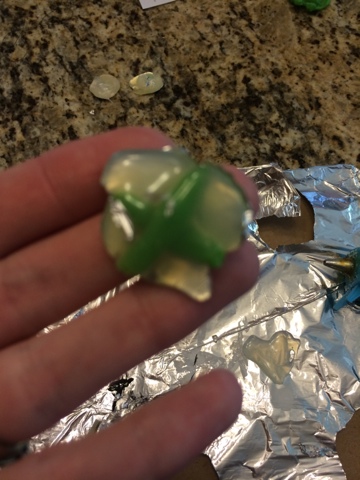 Peeling off our tin foil and cleaning it out. 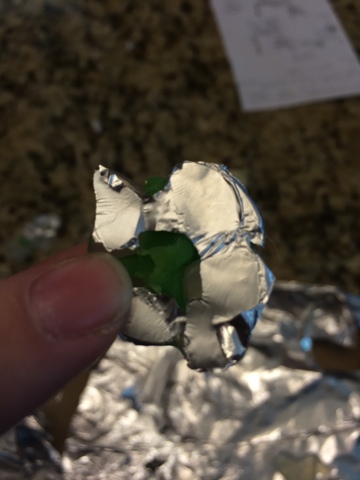 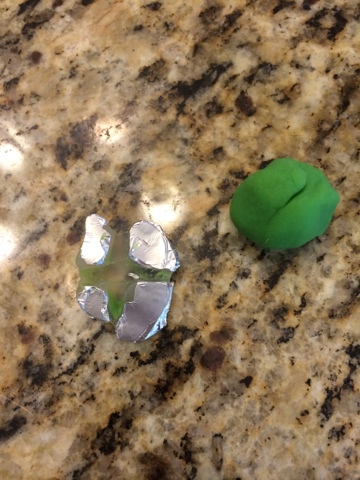 Place a small ball of play dough on the rubber mold (or as refered to in the ancient method where they used a hammer and anvil-the obverse die.) 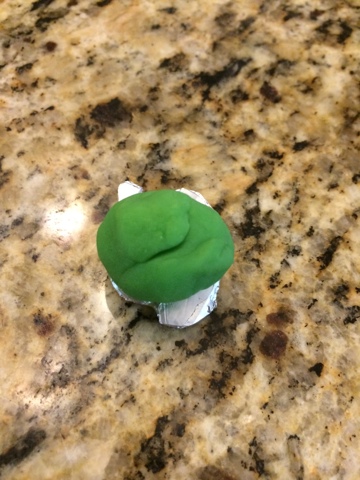 Place the other mold on top (aka the reverse die.) 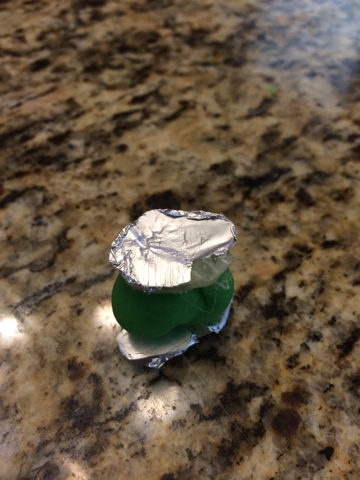 Press together - in olden times this part was done with a hammer as they were pressing actual metal between two anvils that had the images on them. 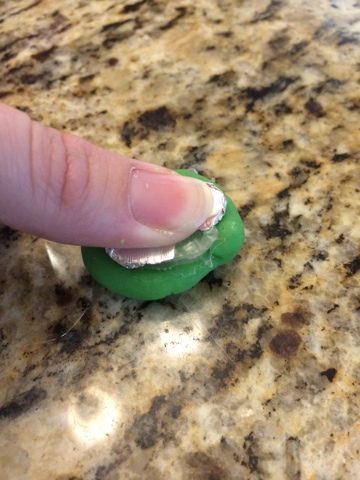 Carefully peel away both molds and check out your coin!  The ancient coins weren't perfect circles either so we didn't worry about ours being perfectly round.  You could always embellish the edge of the coin with some of your play dough toys and just experiment and have fun.  Now that the molds are made you can make as many coins as you like! 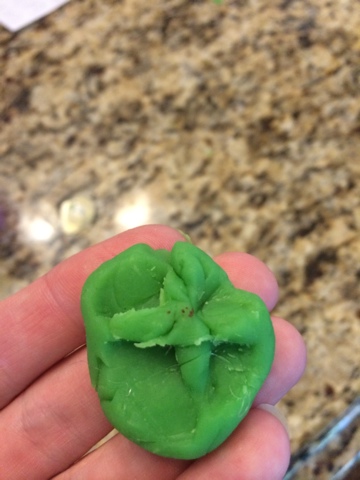 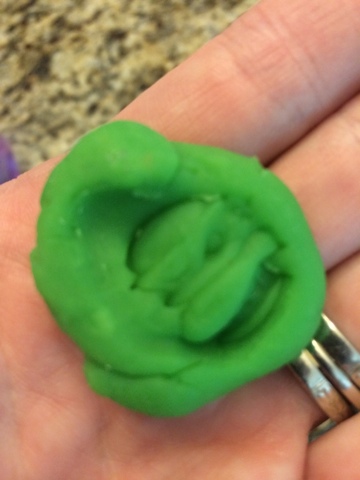 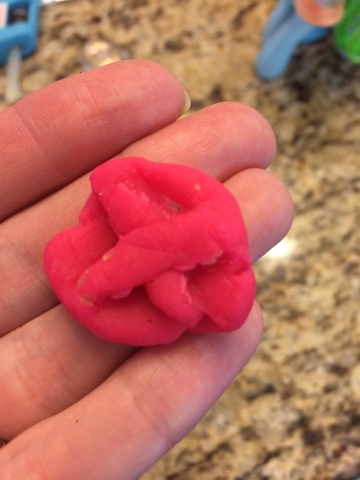 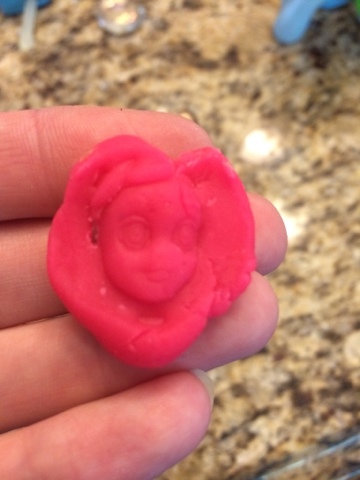 They can play around with coining money with their rubber molds and if they want they can try using the crayola air dry clay that we can spray paint gold once it dries.  I'm not going to force them to do that but if they keep having fun practicing with play dough and want to use the Air dry clay we certainly will.

Next we just layed around on the floor reading and learning and discussing this book from the library which really explored Ancient Rome really well!  My kids started out pretending to put their time travel helmets on and zoom around the room before parking next to me on the floor to explore the pages. 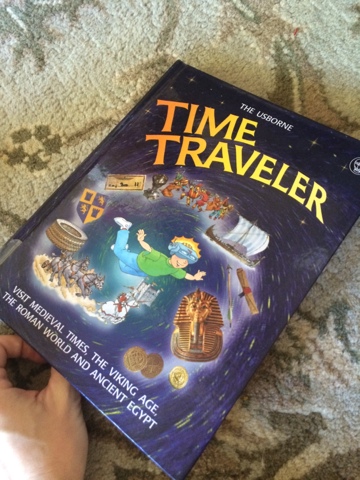 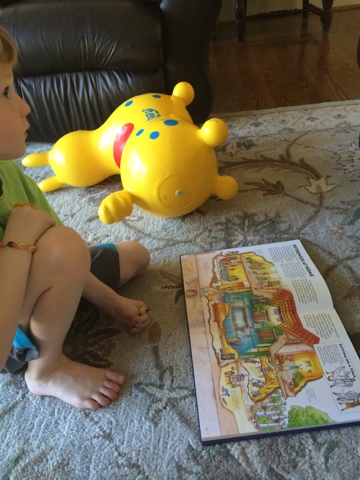 We took a break midway and used our play silks to make makeshift togas. They really weren't big enough but it was fun and didn't require pulling folded sheets out of the closet that I would have to refold...lazy? Meh!  They got the point! Lol! 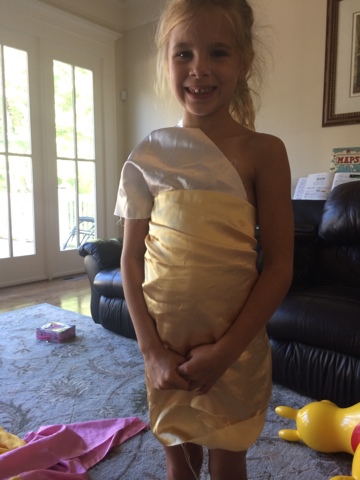 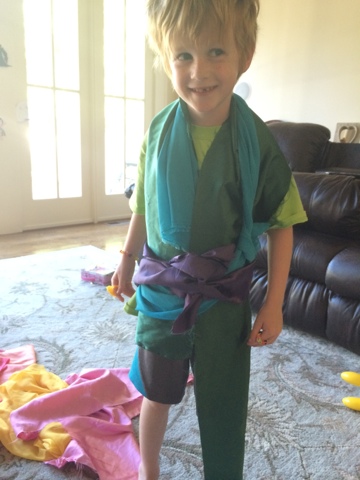 I let them try and figure it out themselves ;)

Add to this day some one on one time each to work on some math and writing, soccer practice and playtime at the park...then working to recreate our sidewalk chalk map that the rain mostly washed away, dinner, daddy finishing the Vacation Under the Volcano Book and that was a wrap!!!!

So tomorrow we will get to our new CC memory work!  Today was full and great and I love being my own boss!

If you do want to go the chiropractic route, be certain to verify the credentials and education of potential practitioners before scheduling treatment. play bazaar satta king