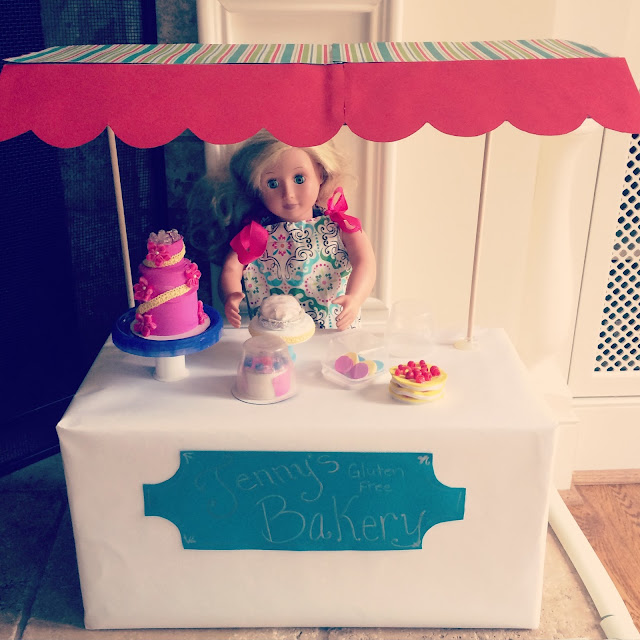 Last week when it was rainy and dreary pretty much every day, we had hoped to go hiking but due to the weather, went to the mall instead to see the Lego Americana Lego displays.  They were pretty impressive! 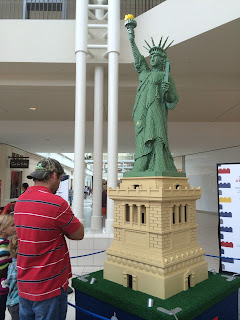 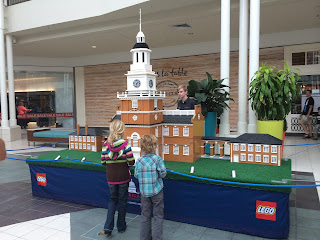 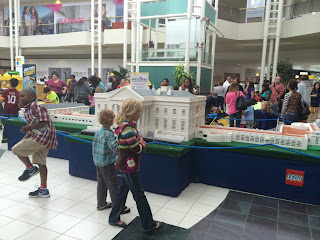 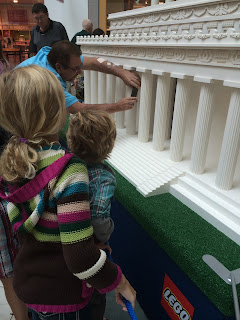 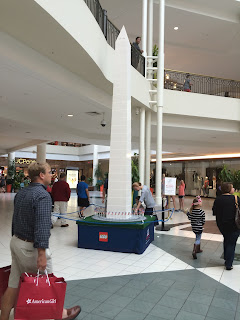 While there J and I couldn't help but want to look inside the American Girl Doll store.  J doesn't have an AG doll, but has an Our Generation Doll from Target.  The AG store has lots of cool ideas for doll stuff though! We came home feeling inspired and started crafting our own bakery items for her doll.  We used the cardboard rounds from used ribbon spools, thread spools for the cake stands with lids glued on top and for the lemon meringue pie, we used a juice bottle lid wrapped with tin foil as a pie plate.  Everything else was made with craft foam or felt and everything is done with a glue gun! So fast and easy! 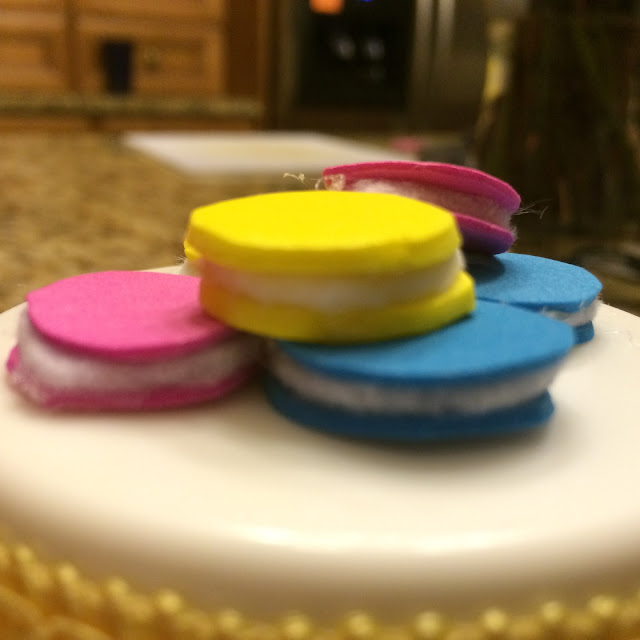 The DIY Bakery Stand was pretty simple.  A cardboard box from amazon prime we get our gluten free oats shipped in wrapped in white butcher paper.  I used wooden dowels to hold it up and the awning is made from the edge of a long narrow cardboard box and one of it's flaps that hangs down.  I glued craft paper over top of the cardboard.  I really just threw this together quickly using whatever I found on hand first and so the wooden dowels were the only thing I had that would work.  I shoved the ends of the dowels into the center of some sewing bobbins and then used the glue gun generously and held for a minute till it was dried.  it was flopping forward a little bit so I had to use some clear scotch tape around the bottom of the dowels that pull back and secure down the back of the stand and that straightened the dowel rods right up and it's pretty stable and good to play with.  Like I said...whipped it up with what we had...I'm sure someone else might have other things on hand that would be even better but this worked just fine. :)  For the sign in front I just cut out scrapbook paper, wrote on it with a silver metallic sharpie and attached with the glue gun. 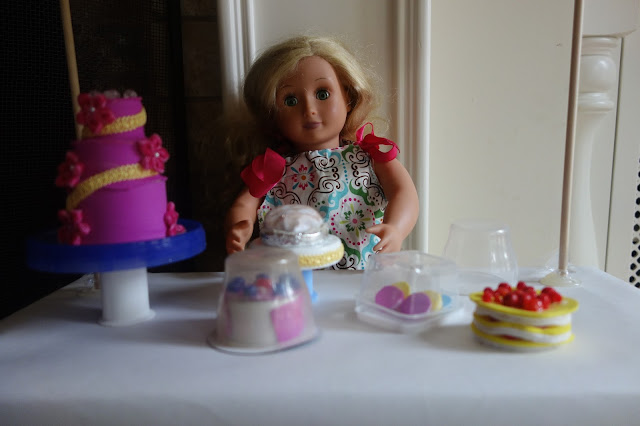 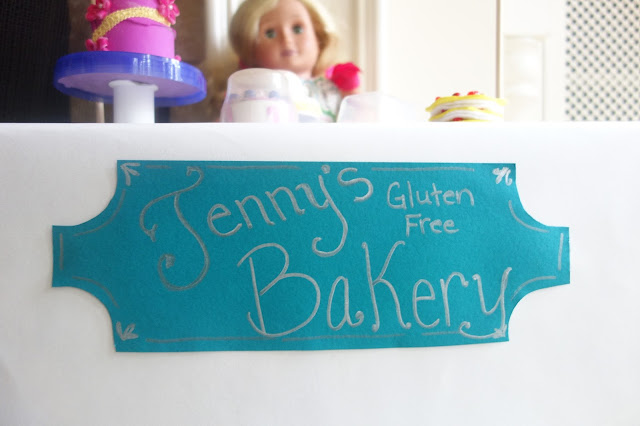 The 3 tiered doll cake!  This cake was the first thing we made.  It is made from the center of three different sizes of ribbon spools wrapped in craft foam.  I hot glued the yellow trim and velvet flowers after. 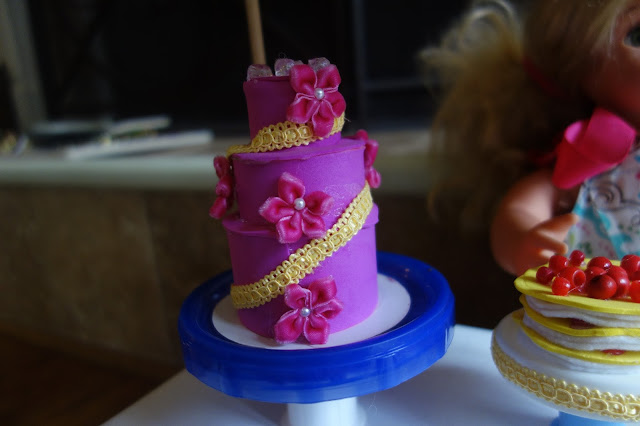 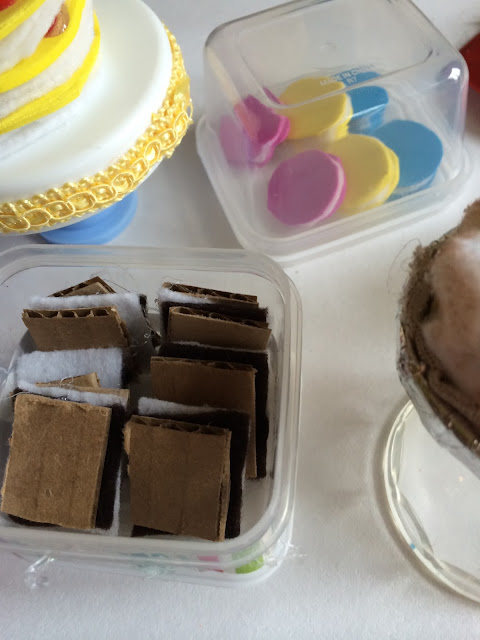 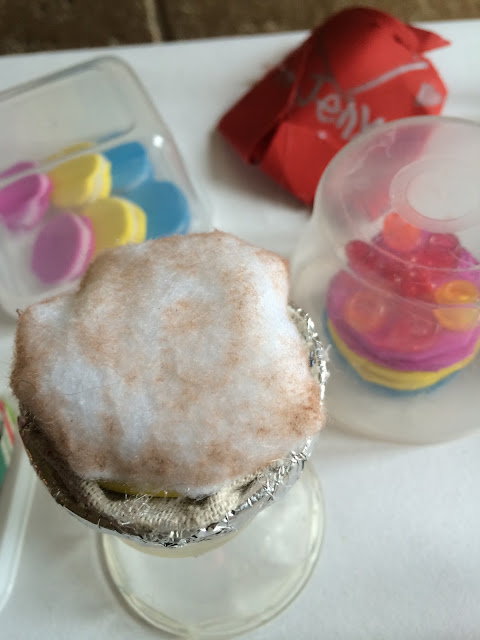 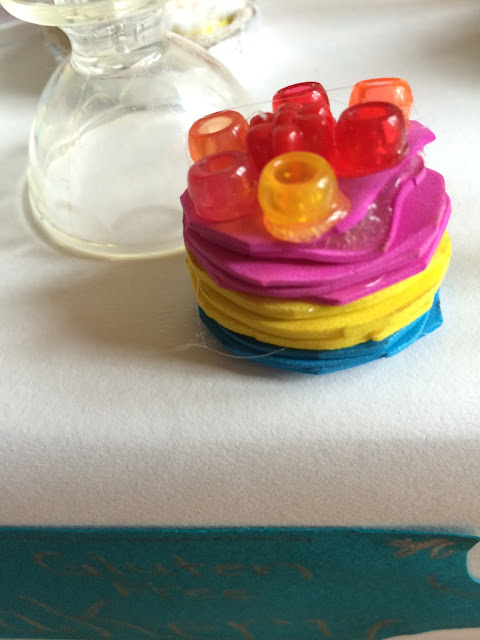 Meringue Raspberry Layer Cake with Lemon Curd...one of our favorite desserts from the book Cooking For Isaiah.. AG or Our Generation Doll version! 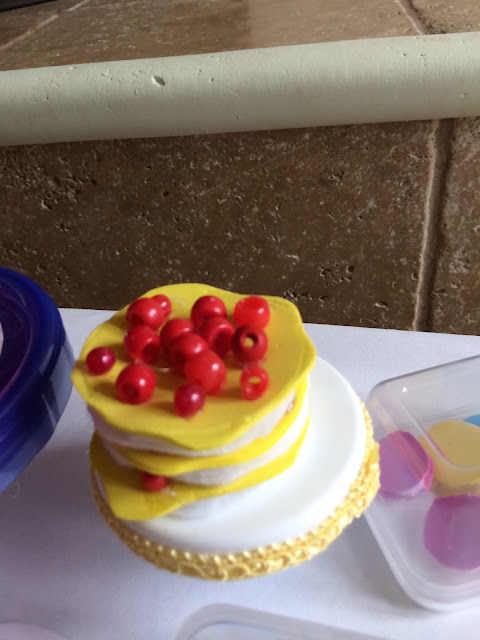 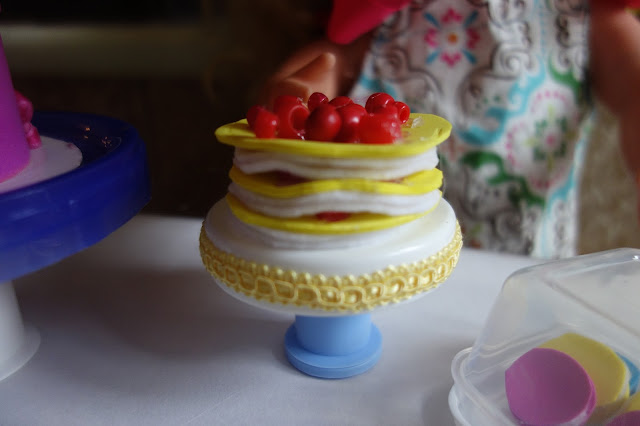 My son was sweet and made this cake for his sister 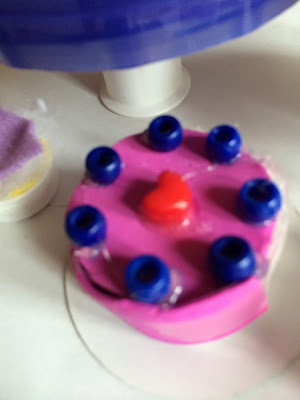 These are the doll cinnamon rolls!  Canvas fabric strips with brown felt strips glued on top, then rolled up and hot glue as you go to keep it together! 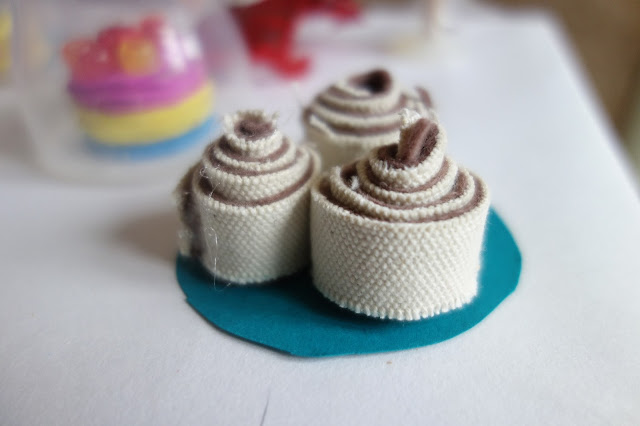 Doll cookies!  These little doll macarons that remind us of the American Girl movie Grace, were made with colorful craft foam and white felt for filling.  we just cute little circles and clued together with a dot from the glue gun! 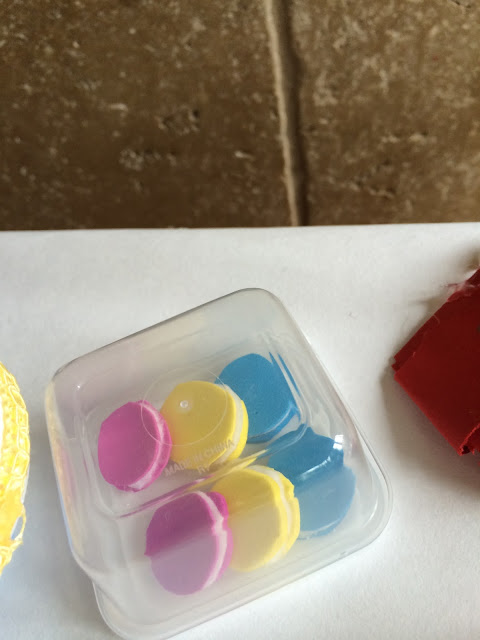 These DIY doll s'mores were my daughters idea.  just little rectangles of carboard with white and brown felt sandwiched between them...again, just a dot of glue from the glue gun between each layer. 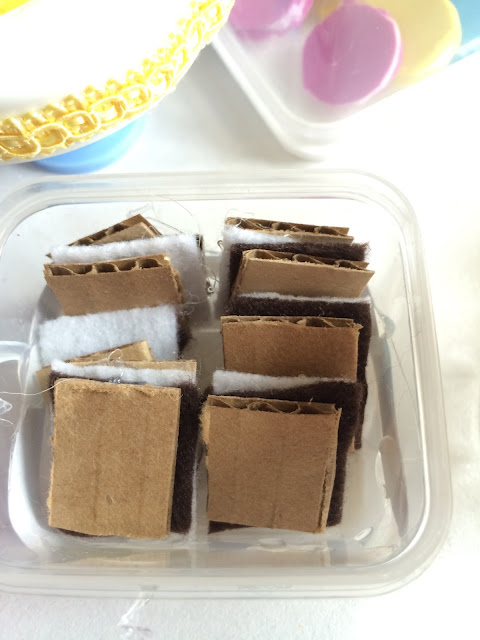 This is the Lemon Meringue Pie.  The pie playe like I said was a juice bottle lid wrapped in tin foil, then we made a little tan colored pie crist, added a circle of yellow craft foam and then put a little cotton wrapped with white felt and glued shit on bottom with the glue gun for fluffy meringue...then just used a brown marker to make the meringue topping a little more golden brown. 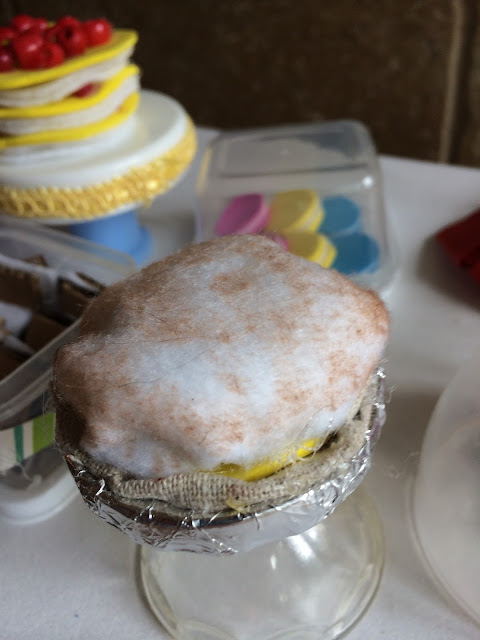 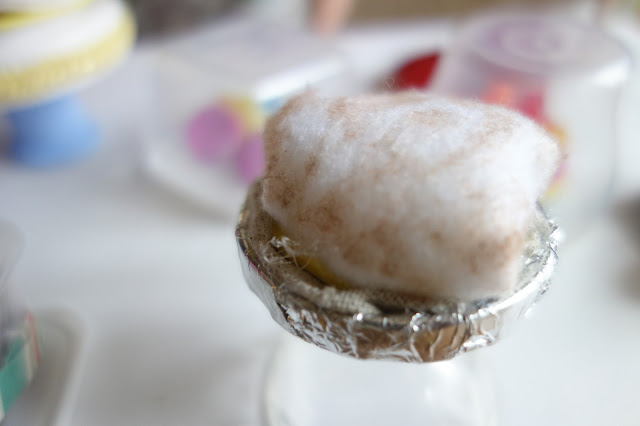 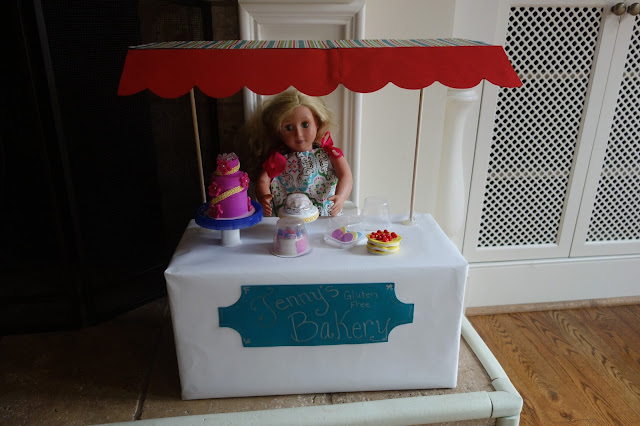 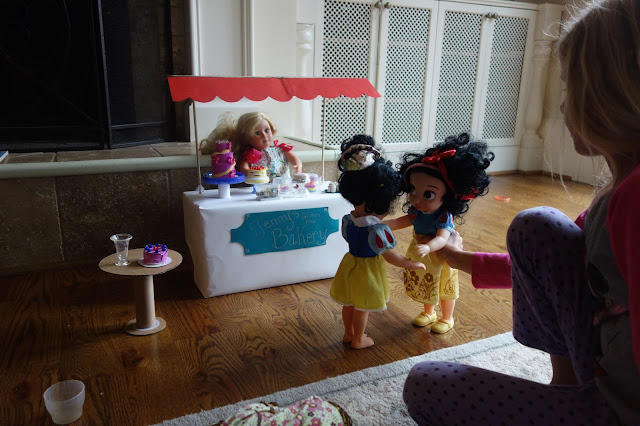 The bistro table was made with a spool from tulle and then cut out 2 cardboard circles, big one for the top and small for the bottom to make this DIY doll bistro table adjacent to the doll bakery! 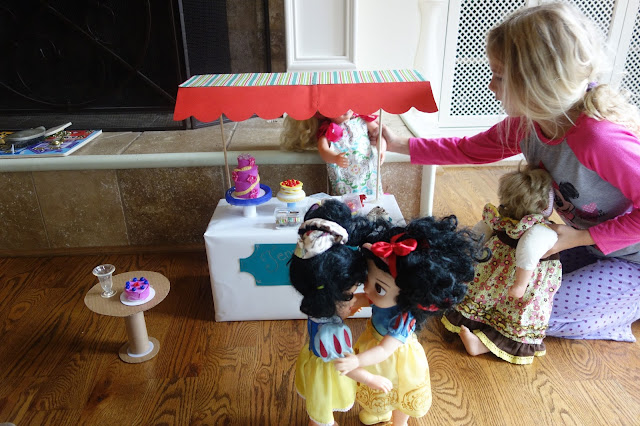 We also used baby bottle covers for cake covers as you can see here.... 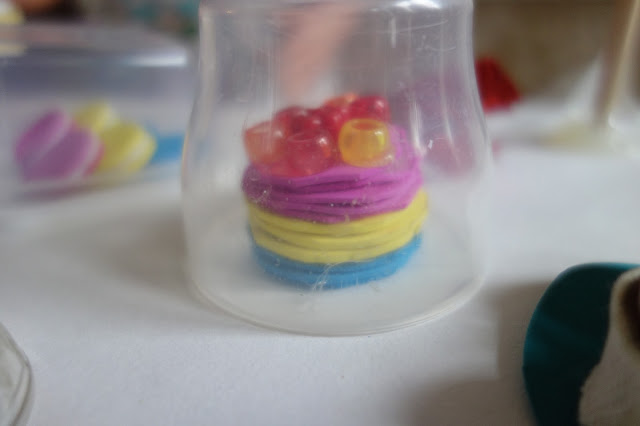 Nothing fancy, but it was a fun DIY project to whip up with my girl on a rainy day!  It's always exciting when the kids see what we can make with just stuff we already had around and turn it into some fun plaything!  Heck, it's exciting for me too that's why I have to blog about it! lol!  Nothing perfect, no trips to hobby lobby getting overly creative and carried away and spending more than some bakery set a target might cost...the dark side of DIY-life...realizing you spent almost as much or more on something to DIY than just BUYING it!  lol!  But I loved how simple it was that even the kids felt confident to climb up on the counter throughout the day and cut out and use the glue gun and make more things to add to the bakery.  I just left everything out on the kitchen island all day so they could help themselves as they thought of something new to make.  A great "play invitation" if you will.  And now the bakery set is upstairs in her room and entices her to come play whenever she runs by and it catches her eye.