I have a couple of things I would really like to share with ya'll! (I lived in Dallas 2 years I can say it now! haha!  I can also say eh! Because I grew up in Canada....and although I'm also from Washington state, I will never say WaRshington....nope...that one just didn't rub off!).  Anyways...and while I'm off topic (yes, before I've even gotten on topic, just a quick question for you...Look at your computer screen....How many windows or internet tabs do you currently have open?  I think within 5 minutes of being on the computer I usually have at least 10 non-related tabs open on my internet browser.  Sometimes I'll have 3 seperate windows open, each having t a bunch of tabs open...my husband will get on the computer and be like "what the heck are you doing?!? How can you be looking at that many things at once?"  Well...I think I may have the answer to that.  Yesterday a friend on facebook posted a link to an adult adhd test so I thought it would be funny to find out..since I always joke I have add anyways.  Scoring above 70 is severe ADHD and I scored an 86...so that's my excuse for always having a gazillion windows and tabs open...Curious how you score?  Check out the Adult ADHD Test Here

Anyways...back to  kids health, I wanted to share with you some of the key things we have done this year to stay healthy that have seemed to have worked really well.  The kids have stayed healthy even when around others who have come down with the flu later that day after playing, coughs, colds, runny noses, etc...their immune systems have done a great job.  The only ailment this whole year was Jordan got a bit of a cough after playing outside in the snow but we were able to nip it in the bud with lithy tree, extra briar rose and doing a warm lemon compress on her chest so she could lay down and sleep without coughing.  (I soaked a linen hand towel in a bowl of strongly brewed lemon tea, wrung it out a little so it wasn't soaking, then placed it on her bare chest and then placed a rice heating pad on top to help drive it in.  It was amazing the difference it made, she wasn't able to recline without a coughing fit, but when she had the lemon compress on, she had no problem.  At bedtime I set it up inside her zip up sleeper pj's so it wouldn't move around and she was able to fall asleep with ease...later I came to check on her and removed it once she was sleeping.  I got the idea for this as well as many other great natural childcare tips from the book Natural Baby and Childcare by Dr. Lauren Feder, M.D.. I also kept her home from school for a day, even though she was on the mend, just to keep her from catching something else while her immune system was down a bit.

As part of our routine, and recommended by Dr. Bain from Frisco, TX I give the kids Dr. Carlson's Baby Vitamin D Drops daily.  I give my 4 year old 2 drops in her juice or water each morning, and was especially diligent once preschool started.

And several drops of Briar Rose by Boiron every couple of days during cold and flu season to keep the immune system strong.  If I notice any symptoms of oncoming illness or find out one of her friends she was playing with is sick, I will give her Briar Rose daily, or twice daily.

Lithy Tree is the other gemmotherapy remedy we have that I reserve for coughs and sore throats.  you can find all sorts of gemmotherapy drops through Dr. Feder's website.

We recently ran out of Briar Rose and I haven't had time to look up local healthfood stores to buy more or order more (I bought mine before the move) so I was at Whole Foods looking to see if they carried it, which they didn't.  However I saw something called Kids Defense herbal drops for around $12 and decided to grab some. 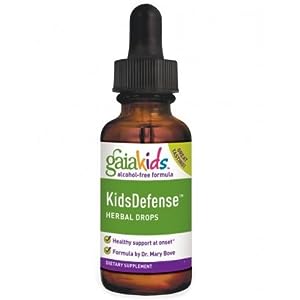 On Christmas Eve, by the time we got home from service, my husband was starting to feel all the symptoms of the flu.  That would make this the third year in a row he has had the flu ON Christmas.  I thought, well, the Kids Defense drops are to be given at onset of symptoms so I decided to try it out on Tyler.  I gave him a full dropper in some OJ and he then fell asleep while I wrapped everything and got it under the tree.  The next day he said he was feeling a little bit better but still felt like he had the start of the flu, so I gave him another full dropper in some OJ and then again later that day...we took that long afternoon nap that resulted in an overcooked turkey, but by that evening, he was amazed at how much better he was feeling.  Tyler is always the skeptical one and whenever I give him stuff like this he doesn't think it's going to do anything, but he admitted he thought it must have helped because he knew he had the flu and he always get really sick for a week, and he improved majorly and was almost back to feeling normal within a day and a half.  He said "I think that crap you gave me saved me." lol..that's Tyler.  Other times he has started to get sick I have put a big shot of Briar Rose and Lithy Tree in his juice without telling him just to see what happens, and within a day he'll be surprised at how much better he is feeling so quickly.  So anyways....I don't know what gemmotherapy is or how it works, but we use it along with Vit D and it does seem to work pretty darn good!

Other things that may help are

We don't eat very much dairy, my son and I have none at all (and we never get sick) and my daughter only eats cheese and yogurt sparingly...and when I notice any onset of symptoms I also restrict her dairy intake...dairy makes us mucusy which  increases phlem and can worsen cold symptoms. (and info out there that denies the connection between milk and mucus are wrong.  My son was so mucusy and constantly congested until I went off dairy and as a benefit to me, I noticed I no longer had excess mucus either...I used to always notice a slight coating of mucus on my throat that I thought was normal but when it went away I was like, oh wow! so much nicer...  Go off dairy and you won't have any loogies to spit out!!!) Everyone in the house uses Coconut Milk.

We try to get exposure to natural sunlight and be active when we can.

We drink mostly water, some juice (we like fruitables for juice boxes or Treetop applejuice made in WA not China) and chocolate smoothies made with chocolate almond milk, peanut butter, banana and ice.

We always use the anti bacterial wipes at stores and fully wipe down our cart and when we leave the store we use either hand sanitizer or wipes to clean our hands as soon as we get in the car.

We try to eat lots of fruits and veggies but I can't say we deserve any awards in that category, our kids are average eaters in that regard.  But if they want a treat, I usually tell them they have to eat something healthy first like an apple, banana or a carrot...then they can have the cookie.  And for my picky 20 month old, the applesauce and other fruit and veggie puree blends in the fun colorful squeeze pouches are a life saver!  That's the only way I can really get things into him! Also the fruitables juice boxes help get some extra fruits and veggies into them.

And for a wealth of great information for your family's healthy, you can visit Dr. Feder's website Here.  Our old NP used to work with her and turned us on to her, she is our go to resourse with a balanced approach of conventional and natural family care.

Gemmotherapy definition and more info on uses @ OrganicTherapy.org
Gemmotherapy
Gemmotherapy is one seminal origin point of modern Phytotherapy. Gemmotherapy uses ONLY the flower buds and/or young shoots from the mother plant. It could easily be called “Phyto-embryonic Therapy”.

Traditionally, Gemmotherapy has been used by knowledgeable nutritional practitioners and homeopaths to assist in the gentle drainage and detoxification processes of the human body. This form of plant-based nutritional therapy has long been popular in Europe. The use of buds in traditional herbal pharmacopoeia dates back to the middle Ages when Alchemy was the common means of treatment.

Posted by Candace @ Candace Creations at 9:07 AM