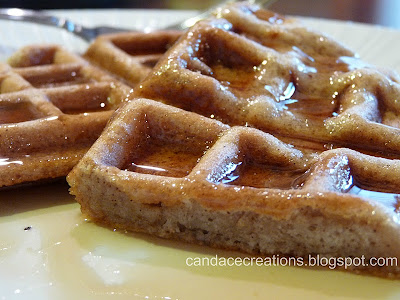 This past weekend we had another great success from our Cooking For Isaiah cookbook.  We made the Cinnamon Toasted Belgian Waffle and it was SO delicious, the cinnamon in the waffles with classic waffle texture, crunchy on the outside, fluffy on the inside, it was hard to remember I wasn't actually eating cinnamon toast.  These gluten free cinnamon waffles topped with real maple syrup was the best saturday morning breakfast we've had in a long time.  So far, Silvana Nardone's Cooking For Isaiah Cookbook of gluten free, dairy free recipes has yet to dissapoint...everything we have tried has been awesome and I've even used her flour blend in other recipes like the gluten free blueberry muffins with coconut struesel, chocolate chip muffins and strawberry muffins and I love it.  This is my favorite cookbook, the only other cookbook I have used so much (and not even as much as Silvana's is the big BHG cookbook.
If you are not feeling brave enough to make you own flour blend and get cooking from this awesome book, well, first of all, there's nothing to be afraid of, it's super easy although I was intimidated about the different flours and everything at first...I don't know why it's really not a big deal...ANYWAYS, if you'd rather stick with the gluten free bisquik mix, or if you not gluten free and making normal waffles, make according to package directions and add 1-2 tsp cinnamon to the batter and a bit of brown sugar.
I'm not working for Silvana or her book, but I just can't help but rave about it every time I make something out of it!  I think she is a genius.

Posted by Candace @ Candace Creations at 11:05 AM