The Dress - Painting with Plaster

The Dress
Painted with Plaster 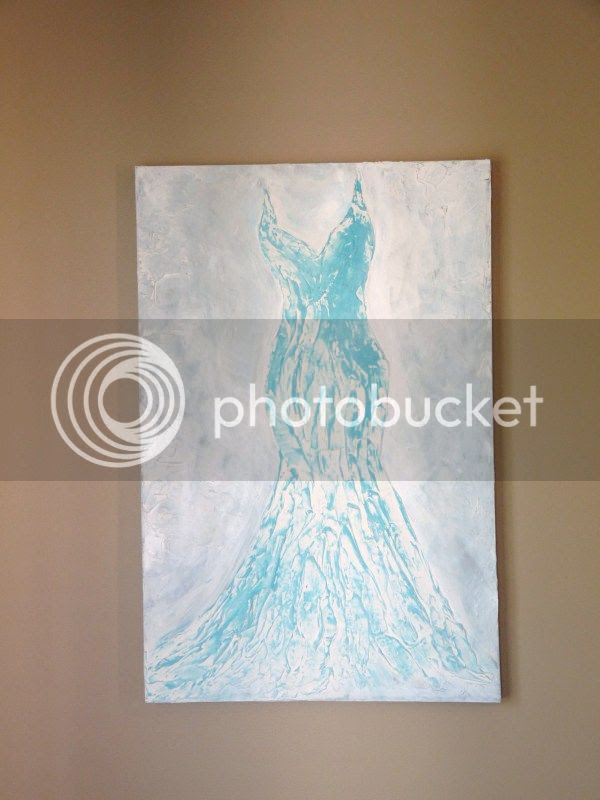 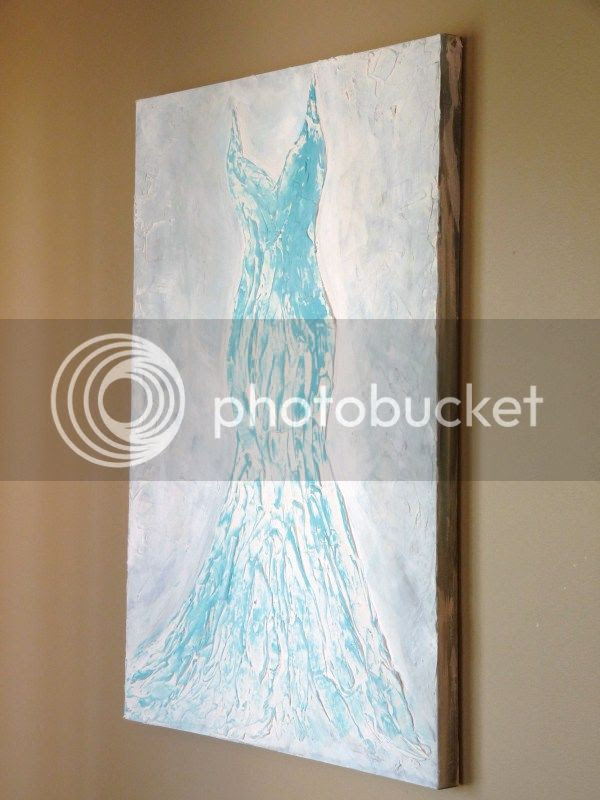 The first time I made a painting where the image was made with plaster and then painted over for a 3D effect was in college when I was doing some works for a production at the Yakima museum.  I made six 6x6 ft paintings...each one themed after the music compositions that were being performed.  My sister choreographed a dance to go with each song too so the production was a combination of live jazz, dance and visual art.  It was cool.  The plaster was used on a painting called Punctuation.  I made a huge punctuation mark on the canvas with plaster, then painted the whole canvas a solid color and then splattered it all jackson pollock style...I thought it went with the theme of punctuation with the punctuated marks they left.  ANYWAYS, I really enjoyed using plaster and have wanted to do it again ever since.  I have ALSO been wanting to make a dress painting for a long time too...like .....Then, a few months ago when I was researching faux finishing when I was getting ready to do the bathroom makeover  I discovered Segreto Finishes by Leslie Sinclair and fell in LOVE.  Then I was looking through the Segreto Art Gallery and saw the paintings by Rachel Schwind and saw the paintings she made with plaster and was inspired.  Her dress paintings with plaster are like the perfect combination of the 2 types of paintings I've been wanting to do for the last few years!  So I made this for the master bedroom. 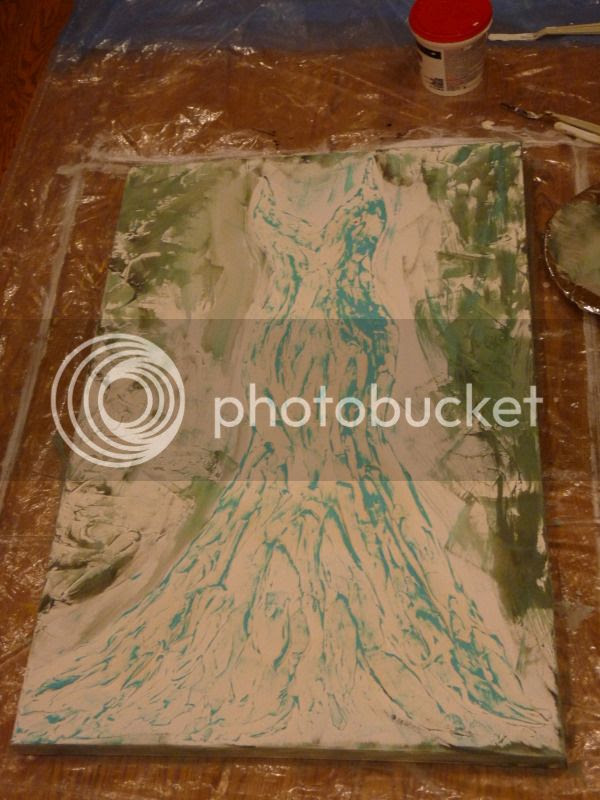 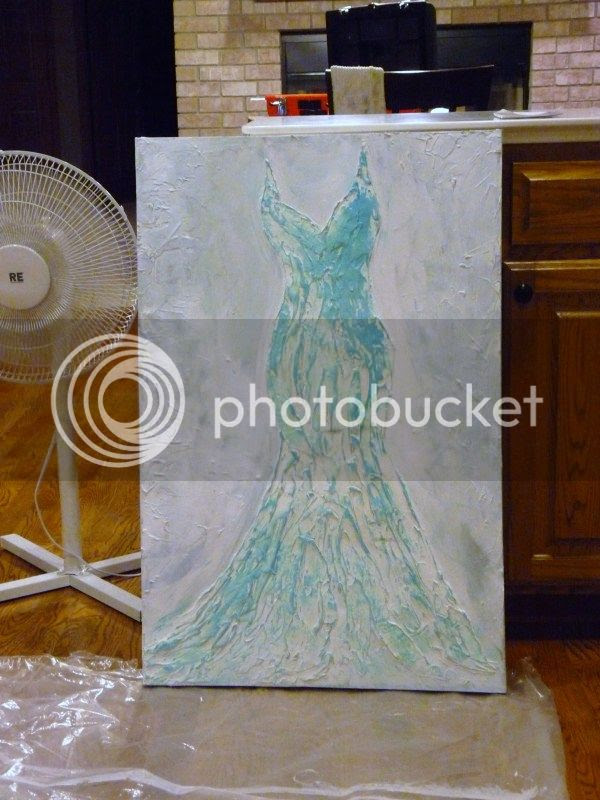 I wanted to make it more greyish and muted the way Rachel Schwind does, but wanted to have some blue undertones so I painted a mix of grey and teal on the background and then just teal over the dress.  I started adding a white-ish wash to the background..toning it down...but then I couldn't bring myself to do it over the dress...it wasn't what I intended...but I loved the pop of color...it still has the simplicity I wanted anyways.  I used plaster and painted it on with a palette knife.  waited for it to dry and then added paint.  Only mistake...I should have not done this on a canvas...the plaster is cracking like crazy so I am going to get a bunch of midge podge and paint that over top of the whole thing to try to keep it from cracking further and hopefully keep any plaster from cracking too much and falling off!  I would be so sad.  The cracks aren't too noticeable unless you get up and look real close but they make me nervous!  The punctuation painting was on canvas too and there was no cracking...even after trasport in a u-haul but maybe it was because that canvas was so thick and sturdy...these canvases I've been buying are really inexpensive and are light and flimsy...I'm not even sure if it's real canvas..it's almost papery because if I get it too wet...the edges start to fray...so maybe that is the problem.  But large canvases are EXPENSIVE!  This one was $16! and it's a good size!  you get what you pay for I guess.

And after I made this dress painting, my 5 year old, who is dress obsessed, wanted to make a dress painting too and design her own dress so I did a google image search for dress paintings and let her pick out a reference picture and she made this, all by herself and she is so proud of it she keeps saying we need to send it to a factory so they can make it into a real dress. 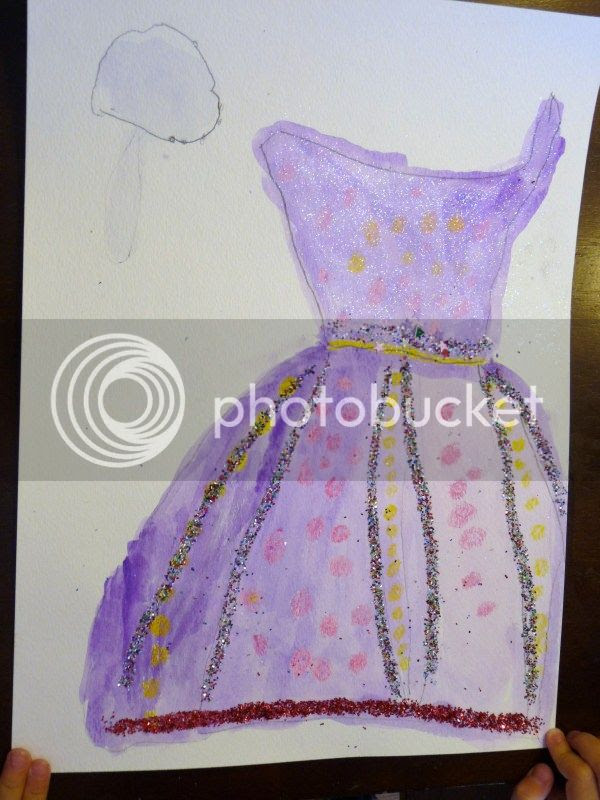 When she seriously wants to draw something, I sit down and give her a little instruction by drawing the same picture along side her on my own paper and explaining what I'm doing as I go and then she draws hers at the same time.  It's from the Monart method when I was teaching art classes and it's nice because I never touch her picture and she can look at it after and be proud that she did the entire thing by herself.  As you can see I turned mine into a silly clown picture as we painted along side each other.  She wanted it to have polk-a-dots so I had her make the dots with crayons and then paint watercolor overtop, a 5 year old couldn't paint a polk-a-dot dress it would be a mess...so this worked well and kids always love seeing the crayon resist the watercolor.  When is was dry she added glitter. 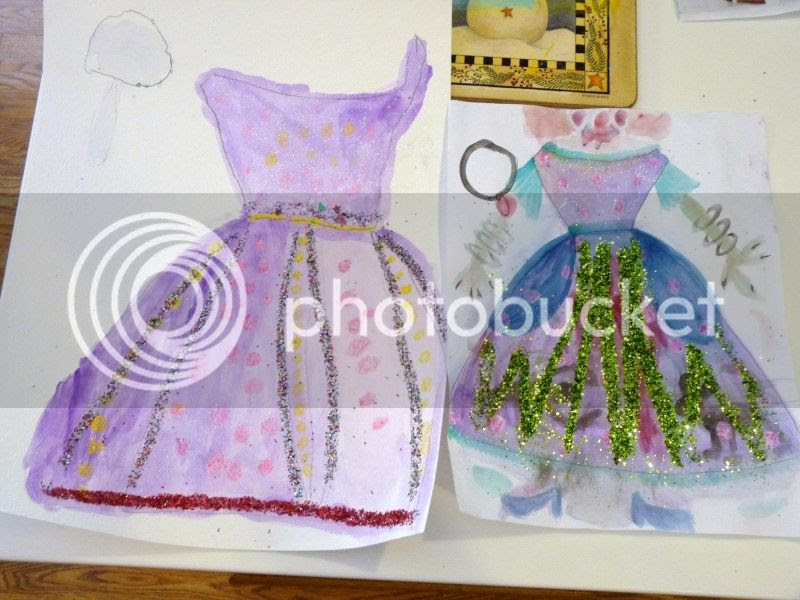 Posted by Candace @ Candace Creations at 9:39 AM

I love both of them! So pretty.

These are so creative! Thank you for sharing this at Saturday Show and Tell. I can't wait to see what you have for this week! I look forward to seeing you there.
-Mackenzie
http://www.cheeriosandlattes.com

I just love the 3D effect of this painting, it looks great! Visiting from Thee Networking Blog Hop - Love your blog & now following :)