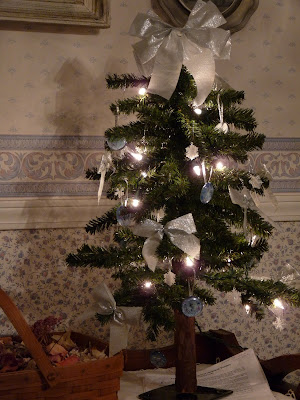 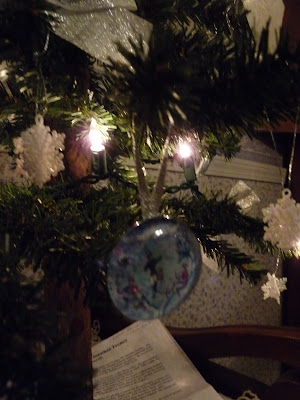 I came across this great ornamental set on Pottery Barn for about $70 and thought it was a great idea. I decided to make a set of glass ornaments featuring the 12 days of Christmas for my Mother-in-Law this year. I found some artwork on the internet featuring illustrations of the 12 days of Christmas on Plates which was perfect since they were painted in the "round". I used the largest flat bottom glass rocks I could find (which I found in the wedding isle at Hobby Lobby, a bag of about 40 for under $3). Modge podged the pictures to the back and then hot glued ribbon for hanging. My mom suggested I put them on their own little tree which I thought was a great idea.

Unfortunately, I could not get my camera to focus on the glass ornaments to get a good picture, but they turned out great!
After making these, I got an email forward about the true meaning of the carol which I then printed off on Christmas paper and presented along with the gift.

From 1558 until 1829, Roman Catholics in England were
not permitted to practice their faith openly. Someone
during that era wrote this carol as a catechism song for young
Catholics.
It has two levels of meaning: the surface meaning
plus a hidden meaning known only to members of their church. Each
element in the carol has a code word for a religious reality
which the children could remember.

-The partridge in a pear tree was Jesus Christ.

-Two turtle doves were the Old and New Testaments.

-The four calling birds were the four gospels of Matthew, Mark, Luke
& John.

-The five golden rings recalled the Torah or Law, the first five
books of the Old Testament.

-The six geese a-laying stood for the six days of creation.

-The eight maids a-milking were the eight beatitudes.

-The ten lords a-leaping were the ten commandments.

-The eleven pipers piping stood for the eleven faithful disciples.

-The twelve drummers drumming symbolized the twelve points of belief
in the Apostles' Creed.

I love this, and your little tree is so cute! I'll have to remember it for next year.
Thanks for joining my party :)

I wanted to copy these too, but didn't. Very nicely done!

What Web site did you use for the 12 days pics?

found round art for this projects at http://www.theplatelady.com/