I know this is a little late and after the fact, but I haven't blogged in a while so I thought I'd fill ya'll in!

For Christmas this year my husband wanted to get me a new sewing machine so I could be done with (and possible smash to bits with a hammer) my old brother sewing machine that I got on BlackFriday at Walmart for $50 a couple years ago. I am surprised at how much I actually did make with that machine but I swear everything took2-3 times longer because of the constant problems....anyways....so by the time Christmas came we hadn't purchased a new sewing machine yet because I'm still trying to figure out what I want.

So for the sake of having something wrapped up and under the tree for me on Christmas, my husband has this tradition of going to the Dollar Store with his dad and brother on Christmas Eve and picking up some random things.  As a joke, he bought my mom a home drug test since she lives in WA and marijuana was just legalized there along with the fact that my mom usually has her essential oil diffuser running in the kitchen and the guys always tease her that it looks like a bong.  So that was funny to watch my LDS mom open on Christmas morning as a gag.  While she opened it and was laughing, I was handed a small gift from Tyler that said on the tag "Don't say I didn't give you anything for Christmas!"  and as I opened it up, it was a pregnancy test from the dollar store!  It was a total joke. I my have said something along the lines of "TYLER!" and quickly stashed it away in embarassment. I had forgotten about it until a day or two later he was about to go out to a shooting range with his Dad and Brother and before he left made a comment "Wouldn't that be awesome if you used that test and you actually WERE pregnant?!?"  I laughed like it was impossible and made some comment like "I'm pretty sure I'm not!" and didn't think much of it...until an hour or two after he left his comment came back to my mind and curiosity got the best of me, even though I really didn't think I was.  I took the Dollar Store Pregnancy test and this is what it read 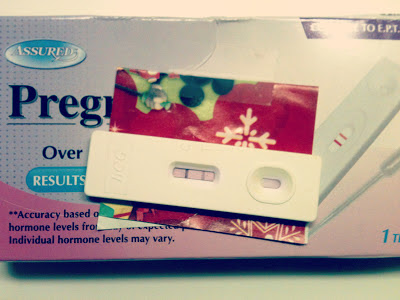 Two lines....that means positive!  I was super excited and surprised but at the same time realized it was a DOLLAR STORE TEST so it doesn't count.  So later on I picked up another test from Walgreens and this time did it when Tyler was with me since I've just told him I was preggers the last 2 times and he'd never seen a test before.  The next one seemed to be a dud....nothing was happening. I started to get frustrated and shaking it up and down to get that pee to run down towards the results box since it wasn't doing it on it's own...we were about the give up and throw it in the trash...when finally the plus sign started to appear!

So, even though I still haven't picked out my new sewing machine, I can't say that Tyler "didn't get me anything for Christmas" that's for sure!

A little back story-We originally wanted to start trying towards the end of spring 2012 but then we found out we would be moving to a new state and decided to wait until after we were moved and settled...which we thought would take like 2 months to sell our house and buy our next but obviously things haven't gone that way.  As the months passed we both still had it strongly on our hearts and finally not long ago, decided...you know what? it could be a year or more by the time we sell our house move and are settled and it could take up to a year to get pregnant after that!  It took 8-9 months to get pregnant with our 2nd. So we decided to place it in God's hands as his timing has proven time and time again to be much better than our own timing.  So we weren't TRYING, but we were just not worrying about it and trusting the Lord.  I was so surprised and didn't think it was possible because we had barely made that decision to put it in God's hands so that is why we were surprised to have a + result so soon!  And I am very thankful because I know what it's like to get frustrated when it's not happening right when you want and I know plenty of people wait a lot longer than I did with my 2nd so I am NOT taking this for granted at all.

Also, the other concern we had and why we originally held off on baby #3 was because my past 2 pregnancies were HORRIBLE!  I was so sick I always lost weight, could barely function for more than half the pregnancy because the sickness was so terrible...and when I wasn't puking all day then I had debilitating migraines.  Our concern was how am I going to take care of 2 kids, homeschool one of them and keep the house clean for showings when I am that incapacitated!  But we gave it all up to the Lord and amazingly I have only been sick 2-3 times...both times revolved around a migraine but I have been to a chiro a couple times and that also seems to be helping.  And rather than puking my guts out non stop like I did the last 2 pregnancies....I actually have to eat like every 1.5-2 hours or else I start to feel crappy. I am not used to having a real appetite like this, especially eating while pregnant and not puking right after every time.

I'm a little over 10 weeks right now and the only major complaints I have is being really really tired....oh and as my 5 year old informed the nurse at my prenatal visit with my midwife as we went over my medical history and symptoms she piped in "AND she has a lot of tutti frutti!" the nurse was confused and I was turning red. She asked her what Tutti Frutti meant and J plugs her nose and says "you know, pee-eww! like the baby has a poopy diaper or something!" then the nurse looked at me confused as I was laughing and I said "She's trying to tell you I have more gas than I used to!"

And on that note....I figured I'd share our Christmas Family Portrait.  My two younger brothers in the back not standing next to any females are available :) 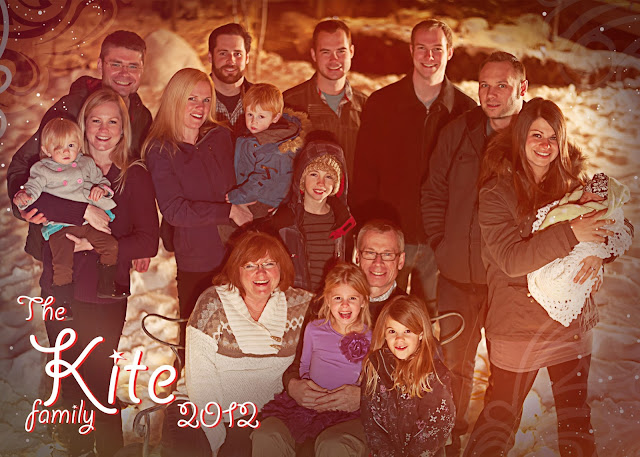