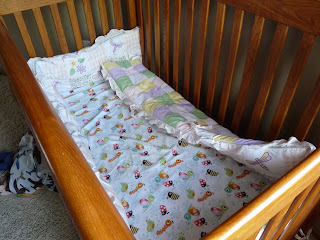 So I decided to make a slip cover to spruce it up and make it more "boy" you know...cover up the butterflies and flowers!  So anyways, I started this "simple" project many months ago...way before we moved, when he was a much smaller baby....like SOOO long ago...and right from the beginning....this project that was supposed to be quick and easy was just a tedious pain in the ***!!!  Every single step, something went wrong...I don't know what my problem was...sometimes it was me, sometimes it was the sewing machine and mostly it was just that stupid green fabric!!!  But alas...I finally hunkered down and got it done...Once his first birthday passed in April and I still hadn't finished this project I knew I had to finish it...I just started getting to the point where everytime I thought about working on it I just got anxious because it was not fun!  I got it done pretty soon after the move in May, but then had computer issues and then was gone...so finally....Here it is...The Crib Bumper Slip Cover 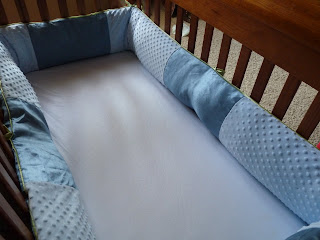 I originally was going to make this into a tutorial...but given the way it went for me...you wouldn't want MY instructions! lol 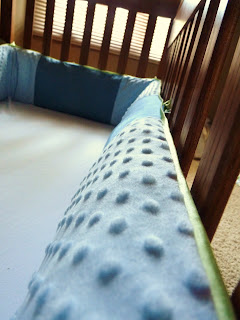 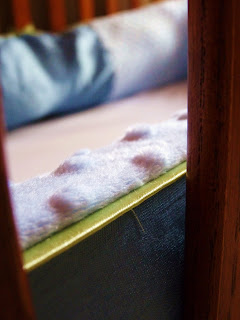 The green ribbon trim on the bottom is the result of a mistake of making the outside panel too narrow and needing to make it wider I had to cut long 2 inch strips of fabric, sew them together then add them to the whole thing...I decided to make the mistake into an opportunity to add to the design by adding in the green ribbon. 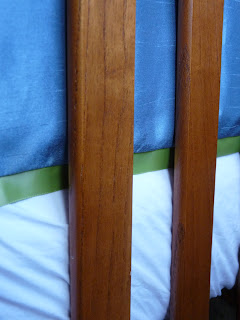 Those green ties were my nemesis!  That fabric did not hold the stitch so I sewed all 12 of them...sat down and flipped them rightside out with a wooden spoon and then discovered tons of huge gaping holes in the seams...it just like shreads at the seams....I don't know what I should have done different....so then I had to just hand stitch the open seams.  That was the most annoying of all the things....but so much went wrong with this project I can't even remember it all anymore, I've blocked it from my memory! lol 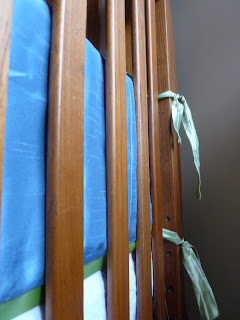 Finally it was done, and when I set it up in the crib...I just pulled on the corner here slightly to fluff it up and that green trim just ripped right out...no there is not a hole in the main seam but the trim just shreaded and came out.  But you see what kind of trouble this turned crib bumper cover out to be!?!??!  lol...well, at least it's done and it does look better than BEFORE!  I hope my 15 month old appreciates what I went through so he doesn't have to sleep in a girly crib anymore!!! lol! 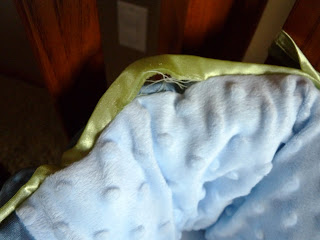 Posted by Candace @ Candace Creations at 10:13 AM

I am loving your blog. I love all the craft ideas, especially the napkin rings. I have always wanted some, but have never found any I liked. Thanks so much for sharing.

Found you through the hop - new follower too.

ahhh i hate it when you spend so long doing something and it just refuses to work! it does look a million times better though xD