My daughter LOVES to play with her tea set and host tea parties. She received an adorable tin tea set by Schylling a little over a year ago and has used it so much. However, my daughter doesn't like to just pretend, she likes my to put a bit of water in the tea pot so she can pour it into her tea cups and drink it. I didn't think much of it...then my husband noticed the inside of her tea pot was started to get a bit rusted, that can't be healthy. One thing lead to another and I was looking at her exact tea set on Amazon and it said a warning that the product may contain lead or produce lead dust. YIKES! Well, I just tried to find it again and now I don't see that same warning, however, in the meantime, I spent tons of time combing the internet trying to find a replacement set that actually advertised as being SAFE to drink out of. It was actually really hard, so I pretty much decided to rule out anything made in China and eventually found this BPA and Phlatelate Free Tea Pot Set made by Green Toys. 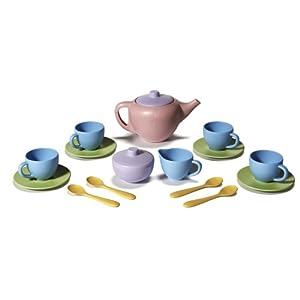 So this will be her replacement set. It's made from is 100% recycled material and is actually advertised as being non toxic and safe for children to drink and eat out of...This was the only set I could find that clearly stated this. It's not AS cute as some of the other tea sets out there, but at least I know it's safe. I'm not ussually crazy about checking these things, but when it comes to toys that are constantly being put in your kids mouth, you want to be careful! I can actually feel good about this set as well as it's environmentally friendly...which is something I've been trying to work on more since joining the One Small Change Challenge.

If your little one loves tea parties or you are trying to think of a gift for a little girl, I would definitely recommend this tea set, it's durable, safe to play with and drink with, totally non-toxic, made in the USA, and helps the environment. And unlike some "green toys" that tend to be more boring to look at, this tea set is still colorful and cheerful.

Some of my other favorite safe toys are

Glad you found Texas-Blogging Gals! Will get you on the next updated list soon.

Come see me at my personal blog, too, real soon!