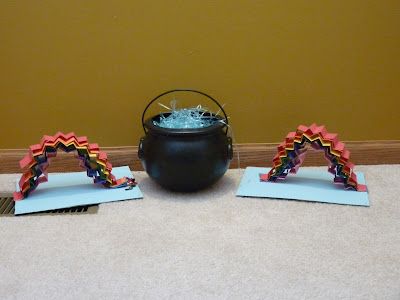 So we started out by finding this fun little song that teaches about St. Patrick's Day and so that is how we learned what it is all about.  I thought it was quite interesting, I never had any clue what St. Patrick's Day is other than people wear green and lots of people get drunk. 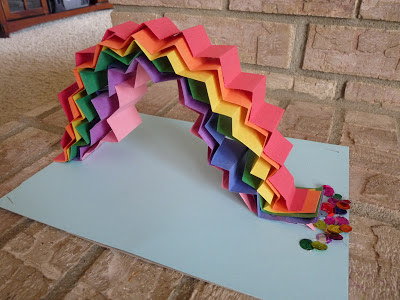 We started out with our rainbow craft. My daughter held up a scrap strip of paper and said "I want to make a rainbow with this!" and that is how we came up with the idea to make more strips of colored paper, fold them accordion style and create a standing rainbow.  For the base we used a recycled cereal box covered in sky blue paper.  To fasten the rainbow strips we used the glue gun...I thought with elmers glue it might dry to slowly to hold them in place and I get impatient with that kind of stuff...so we use the glue gun a lot!  When making the rainbow, you have to make the colors on the bottom progressively shorter than the ones on the top, we started with them all the same length and then just glued and trimmed as needed.

For our reading pot of gold activity I wrote some of the sight words that J has been working on lately, some she knows and others that she needed more practice with, on yellow paper and then put it through the laminator and cut them out in circles.  I put them in the pot (which was from halloween) and then hid the pot in the play room with their rainbows.  I put a few strips of fabric leading into the playroom for a following the rainbow effect to lead them to the pot of gold. 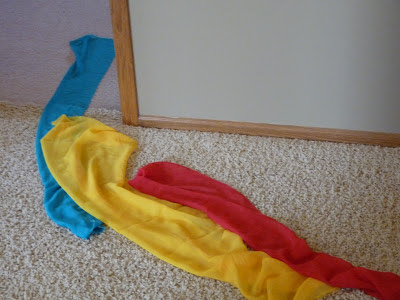 (sure gonna miss this playroom....sigh) 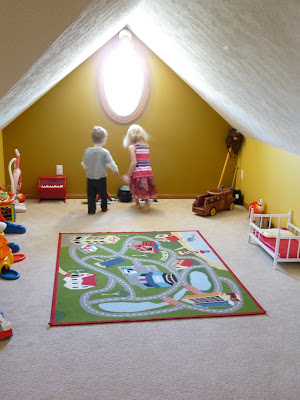 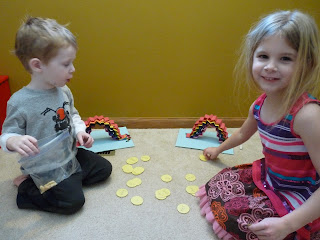 Once they found the pot of gold, J had to read each coin if she wanted to keep it.  B decided to join in and started reading off letters that he knew so he could keep some too.  The words she missed on the first try went back in the pot and then she was able to try again to keep them.  After collecting their coins we came downstairs and I had her figure out how much money her gold coins were worth.  I had made a key for how much each word was worth with values from $0-$10.  I had her locate the words on the key and then type the value into the calculator to tally up her total.  Then I had her tally up the total of B's coins (which gave her a chance to read those words too).  Then I had her calculate how much all the coins we worth all together.  The next thing we did was arrange them into piles of 2 letter words, 3 letter words, 4 letter words and 5 letter words and she recorded how many coins were in each category and identified fewest, most, etc.  I just kept making her think of them in different ways.  The last activity we did was a page of mystery addition that I made up.  I wrote equations like have+said=   and she had to use the key that listed each words value to figure out the true equation and get the answer...so there was a lot of reinforcement with using the sight words as well as math going on....and there was NO COMPLAINING!!!!  that was nice for a change...I need to make it more fun like this more often.  I was better before Christmas but then since being pregnant I was so tired the first trimester...school got kind of boring...good thing 2nd trimester is giving me some energy back to get more creative and fun with school again! 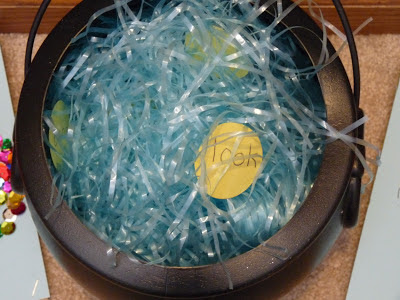 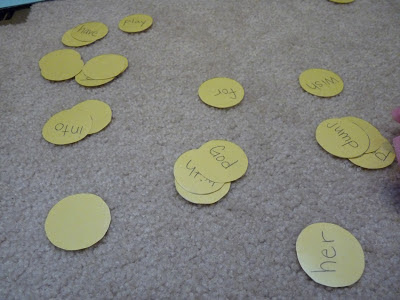 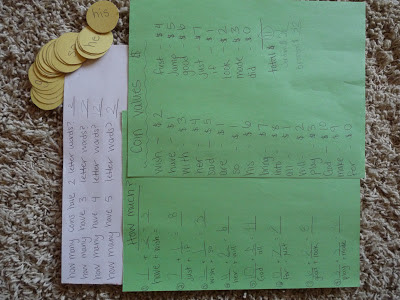 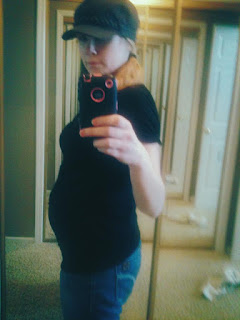