This week we enjoyed week 9 of our CC studies!  And of you haven't seen my other posts, we use CC as a launching pad for other studies as well as incorporating the recommended things to cover for each year from Ambleside Online in our own arts based hands on eclectic style homeschool...so keep that in kind if things seem random or not part of Classical Conversations. I just like to document and share some of the things we do each week.
Geography
While studying East Asia Geography we opened up to those countries in our MAPS book and took done time to study all the images and facts about each.  When we came across Mongolian Throat singing, we had to YouTube it and found a great little video of a Mongol Man Throat Singing while playing the  Morin Khuur....(here's a small corner of the Mongolia page in the MAPS book).  The video had a beautiful landscape in the background and the sound was strangely enchanting.  The kids loved it. 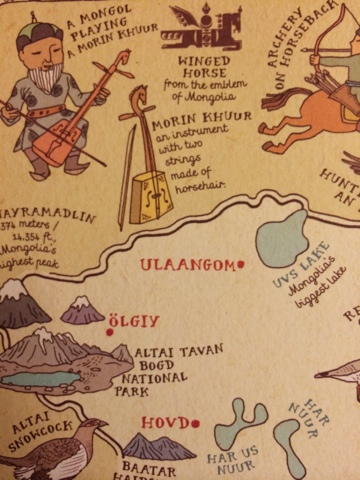 Here's the link to the YouTube video, I can't seem to embed videos when blogging from my phone. 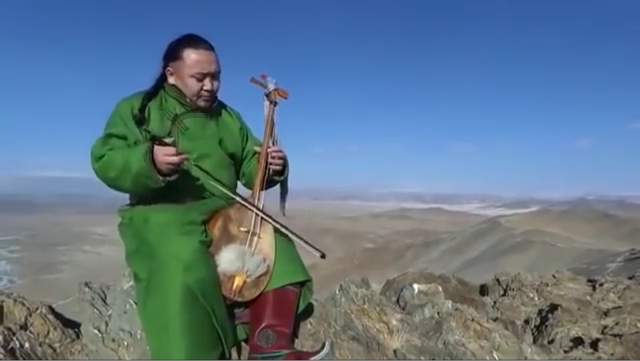 http://youtu.be/1rmo3fKeveo
We also watched this video we picked up at the library 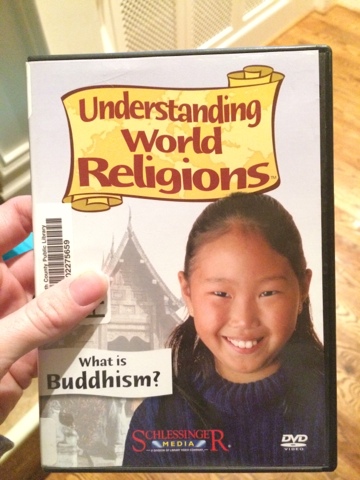 Which was great because after reading the book The Warlord's Puzzle this week my kids kept wanting to know what a munk is and it just added a little more info to the peg they set in their little minds about Buddhism from week 7's history sentence.
Math 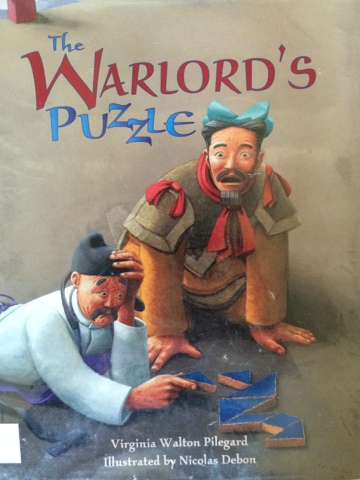 We had a lot of fun with this book this week playing with Tangrams and just enjoying the story and the artwork.  I kept finding the kids studying the pages of this book at some point everyday this week.  And they didn't tire of playing with their Tangrams either. The book is good for math, history and geography which is why I saved it for this week as we head across Eastern Asia as it takes place in China, where Tangrams supposedly originated. 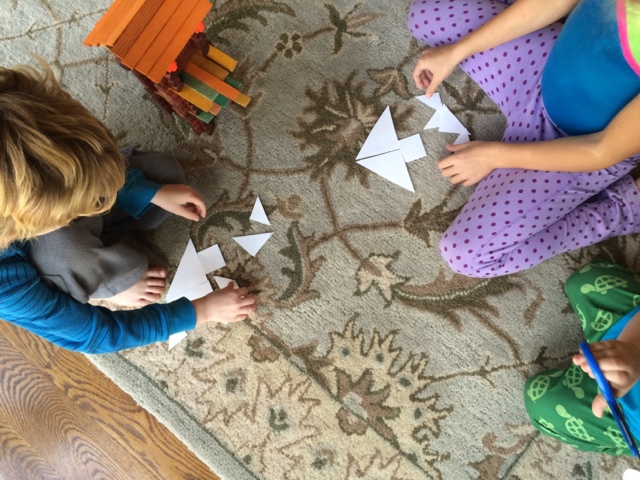 We also continued to have fun with the game Animal Crossing from the book Family Math. 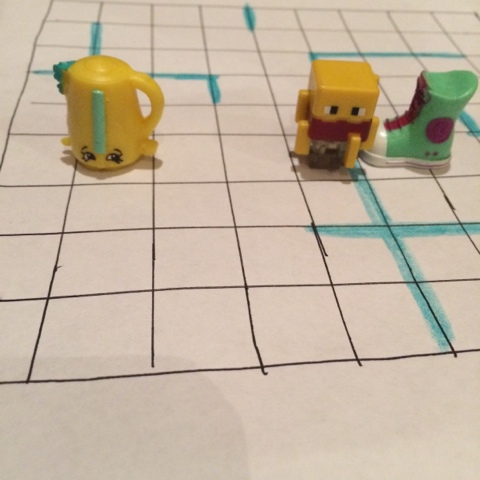 We also did some worksheets from Math Mammoth on line symmetry and some other geometry activities to go along with our work with Tangrams.
Other math we did included the big Brain Quest Grade 3 book, math war, math facts app, starfall etc.
SCIENCE
this weeks science was some parts of a plant: root, stem, leaf, which was easy enough to remember we didn't expound in it that much as we have spent plenty of time pulling up weeds and examine them from the roots up.  We could have drawn a diagram in our nature notebooks, we probably still will but we just didn't yet.
LATIN-ENGLISH GRAMMER
We cover this in out memory work but other than being silly with our frog puppet, we just do the memorization and act silly usually and try to make up some actions that help remember the English Granmer words.
HISTORY
Because Confucius was the topic of week 9s History Sentance and that Toaism emphasizes harmony with nature, we turned to the section on Confusianism in my Art History Text and saw images of beautiful landscapes so we did watercolor paintings of Imaginary   landscapes. 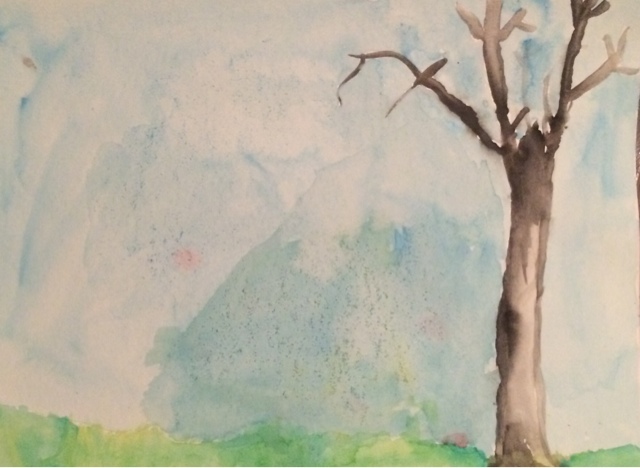 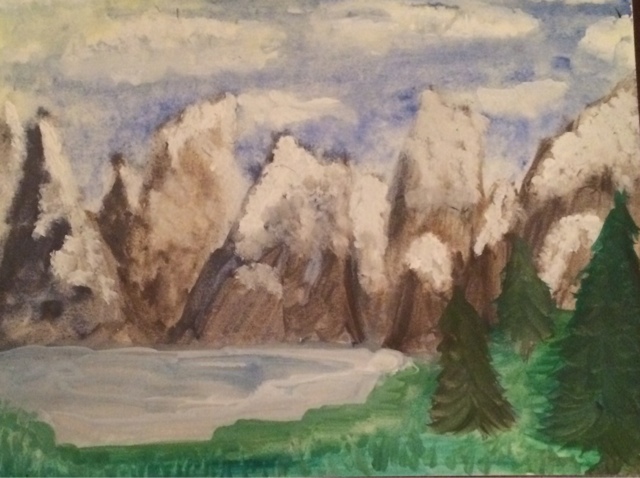 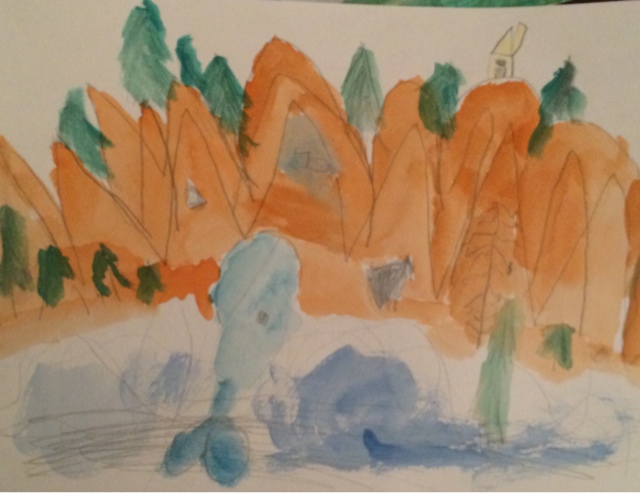 We read a book about Ancient China and learned about archeology and artifacts.  This also led into some science discussion on Ozygen and Carbon Dioxide and plants which tied in nicely to our current study of plants for science.
We watched a narrated version of a The Emperors New Clothes on YouTube.
We also started listening to Story of The World this week.  I ordered the CDs and the kids listen with drawing paper so they can take notes and it draw what they find interesting or important.  We listened to the first couple chapters taking us from the Nomads snd The Fertile Cresent up to Egypt.  It was a good review of things they have already touched on but with the addition of Egypt because CC didn't cover ancient Egypt, it went from the fertile Cresent to Greece and Rome and then onto Asia.  I REALLY wanted to read Tirzah to my daughter after a friend who is doing Heart of Dakota mentioned how much they loved that book several times.  Ambleside Online year 3 says to cover Exodus and we started CC this year with the Ten Commandments so I was so happy how I could tie it all in together and I really enjoyed the details given in Story of The World.  Its so enjoyable to listen to and so easy to just pop in and get cozy and relax together with some notebooking supplies!  My daughter liked hearing the perspective of a Nomad girl and drew a picture depicting part of her story with a couple notes.  I also had my Art History text handy because it is a beautiful resource to have on hand for history!  Just flip open to that time period and it has the best images....no google needed!  My son immediately wanted to draw this gold Pharroah mask as we listened to the part about mummification and Pharoahs while looking at the images in that section of my book. I gave him some tracing paper and let him trace it while listening. I'm just excited about this addition because when I actually looked into SOTW I thought it would complement CC cycle 1 and our other studies reall well and just nicely round things out.  I mean, from a Charlotte Mason perspective I think this is the perfect thing to listen to during afternoon quiet time/tea time once a week or so.  I originally thought we would use it in the car but I'm dependent on the DVD player at this phase with my toddler so I don't go deaf from his screaming!!! 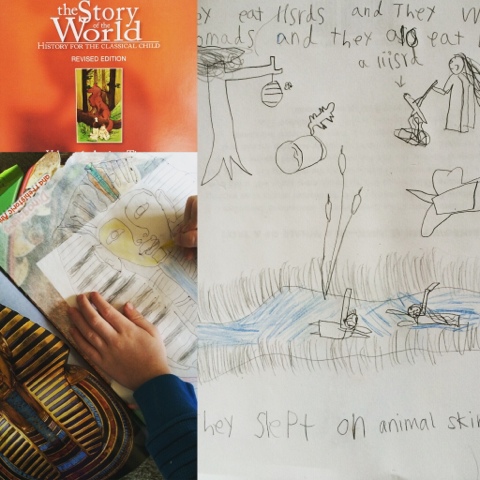 At night I started reading Tirzah with my daughter and we couldn't put it down!  My husband got home from the airport late and we had been snuggled up reading longer than we realized...it was past 11 pm!
Bible-Devotion-Character
We chose our main devotion to be from the Big Book of 5 Minute a Devotions which is animal themed and we learned about sloths and being patient.  Later in the week I had woken up early with a migraine and the baby was up.  After I got him back to sleep I just decided to stay up and try to get rid of the headache before it got to the unbearable point.  Since I was up so early, once my head was feeling better I started reading in proverbs and came across this verse
Starting a quarrel is like breaching a dam so drop the matter before a dispute breaks out. Prov 17:14
I told my kids about it later over breakfast for a devotion, first remembering the Wild Kratts Episode where the dam gets broken and it was so hard to build the dam back up once all that water had gushed out and it took so much work to rebuild it and not have new leaks keep springing, spewing out more water...they are big Wild Kratt fans so they knew this episode well.  Then I told them that proverb I had come across and we talked about it and how when we start a fight, it's like breaking the dam and then instead of water rushing out, yucky feelings and ugliness rushes out and it's hard to fix things once we let all our anger out, and then it just keep getting harder not to have little fights all the time because there are leaks in our "dam" that make us more quick to anger and then we just get stuck in all that continual cycle of patching the dam and springing new leaks.  It was good because the kids are wonderful playmates but it is a needed skill to learn about choosing your battles and they have been bickering more and more over what seems to me like nothing.  (Cabin fever probably with the weather!) They got it quickly and after that, when little petty disputes started to break out I would remind them "is this worth breaking the dam over?" And before I knew it they were talking about it on their own and my 5 year old even later said he was going to say something to his sister but then stopped because it wasn't something to break the dam over.  Thank you Lord for your simple wisdom!!!
We also read The Hundred Dresses this week which was great as we've been talking a lot about kindness in our devotion/character development.
Charlotte Mason/Unschool
Moving away from the Classical/Charlotte Mason side of things here is the more Charlotte Mason/Unschool parts of our week
Tinkering
The kids often enjoy working and tinkering on their clubhouse.  It is a framed out bathroom in the unfinishee basement.  They have laid tile they found in the surplus from when the house was built.  We told the previous owner not to worry about cleaning out the basement...made things easier for her and it was like little treasures for us.  This week they started decorating it for the upcoming holidays.  They were bailing the Christmas ornaments to the wood frame using a wooden branch piece I cut when making a set of blocks out if different size tree slices. 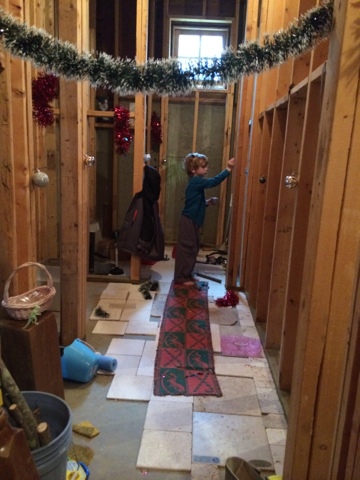 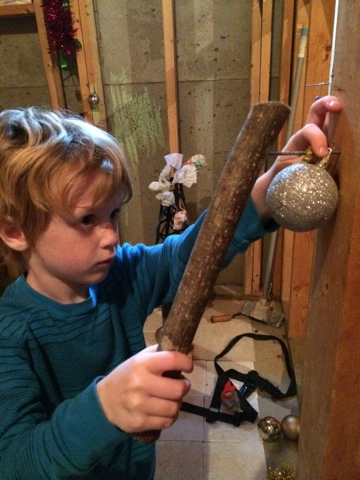 They made a coat hook 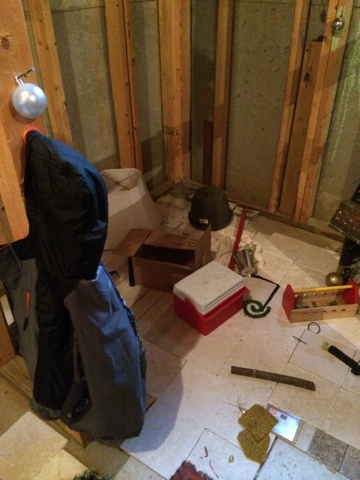 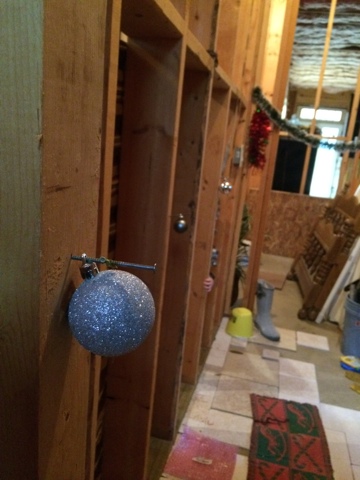 Anyways it's just a fun space where they spend a lot if time planning, tinkering, rearranging and imagining.
My daughter has an old school desk on the next area over with all kinds if old printed business paperwork and she has a stack and goes through with a pen and calculator acting like a stressed out contractor.  Lol.
NATURE
The yucky Gray skies and rain parted for a little bit this week allowing us to enjoy NATURE!!!! Ahhh...so good! 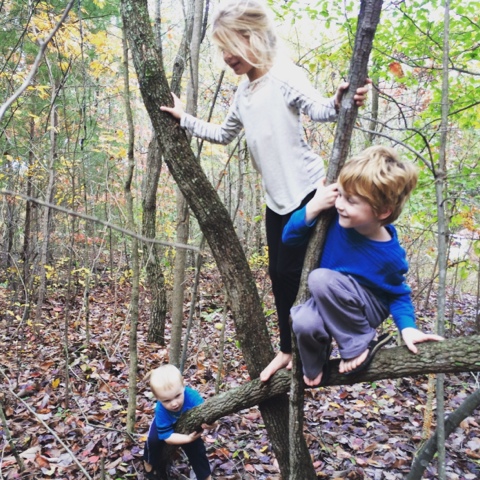 My kids pointed out how fresh the air was in the woods and were reminded of our conversation about Oxygen and Carbon Dioxide, and how trees take in the CO2 and give us back fresh air!!! (aka oxygen).  See you really do learn by living and learning can happen anytime anywhere!  It doesn't stop when you leave the classroom/schoolroom.  It doesn't always have to be done within the pages of a workbook. :) 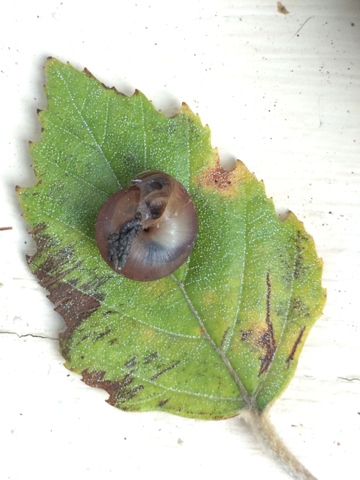 And we are still getting a few tomatoes but the season is pretty much done the kids check on them for us.
MUSIC
My daughter is taking a ukulele class but my son I'm just going with a gentle approach with him and let him take the lead with how much or how fast he wants to learn.  He was a little intimidated by trying to play at first but now he remembers how to play a c note and is getting more comfortable just experimenting with it.  Here they are learning how to tune their ukuleles with a SNARK. 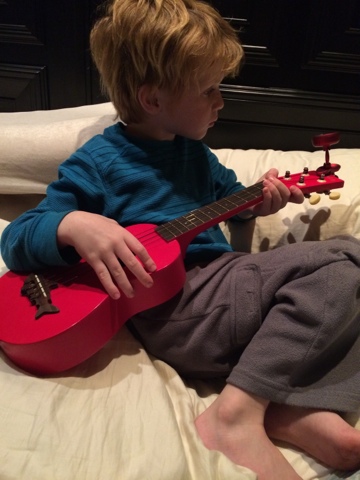 And my daughter put on my old prom dress on while she sang along with The Celtic Women....yes mostly inside these week due to weather and having colds! 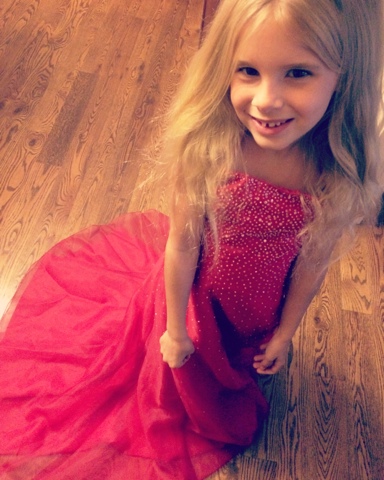 LIFE SKILLS
They've become a good team at making gluten free muffin mixes, refilling the cat food, making beds, unloading the dishwasher, sweeping up their crumbs, packing their lunch before their enrichment class day, etc.
And other things that kept them busy this week are Lincoln Logs, poetry, making their own story books, writing cards to grandparents, reading Pollyanna together ( my daughter reading it to her brother), helping me sand down a headboard with a power sander, playing checkers together everyday, sidewalk chalk, trampoline, gymnastics, soccer and of course Halloween excitement.

Many types of health issues can be helped by chiropractic care. Since most nerves and muscles of the body originate in the spine, misalignment of the spine can result in various pains and health issues throughout the body.play bazaar satta king