I've gotten behind in posting our CC weeks and now I'm playing catch up.
Classical Conversations Cycle 1 Week 10 and other highlights
Timeline
we learned this weeks acts and facts but it's really review as this is our third year learning timeline.  We listen to the music in the car as well.
History & Geography
We came up with some actions and for both as well as had fun studying and exploring the page about Japan in our MAPS book.
We also have these activity pages that associate with Japan from our MAPS activity book 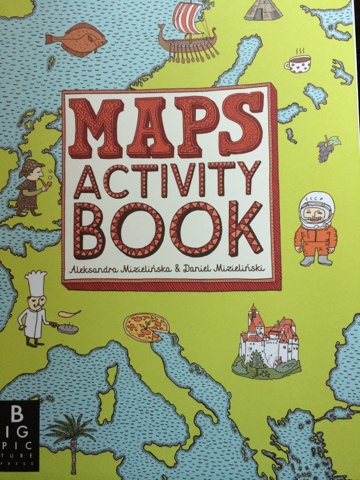 In those landscape of Tokoyo, they are prompted to draw aliens attacking and risky robots defending the city. 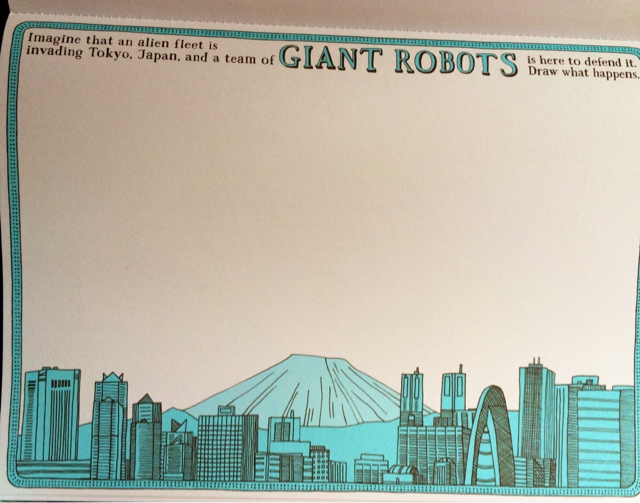 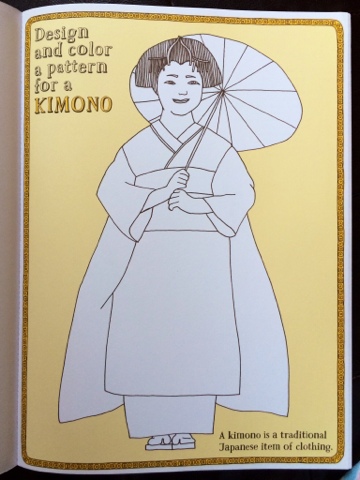 Math
This week we skip count the squares, my daughter remembers this all from last year but we try and help B (5) get it. He was in foundations last year too but at age four he got done things but or he might recognize parts of things he learned but they are do little at that age and being a class with other four year olds...it wasn't like they were exactly CC Scholars.
Other math fun this week has included more fun with Tangrams, figuring out how to make other geometric shapes with their Tangrams pieces and recording the number of pieces used etc.  We also did some activities that introduced measurement and finding the perimeter.  In their individual math J continues to work on finding missing addends and multiplication.  B practicing basic addition and subtraction, sorting, puzzles etc.
English & Latin
We went through it and memorized it but I didn't do anything fun or special...it's been one if those blah weeks where mommy is doing what she has to do but lacking some energy and excitement (dreary weather, time change, recovering from a cold and PMS will do that to ya).
Science
Kinds of leaf parts... We looked up what they were and the kids participated with me in creating this nature journal page 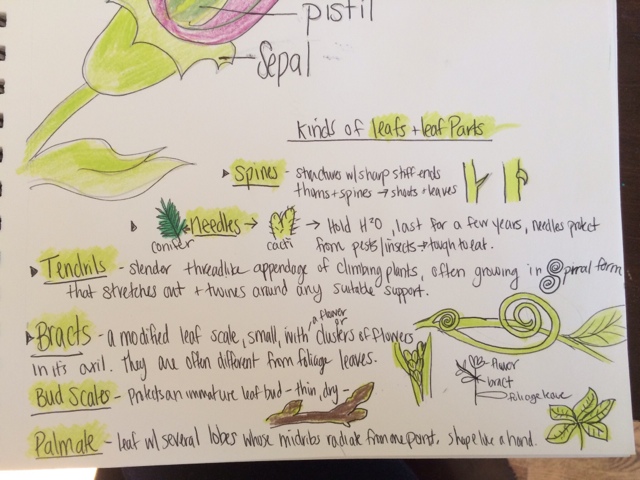 Fine Arts - Music
So have supposed to have been doing fun whistle starting in week 7 but I didn't.
In our CC community the 2 years prior, all moms dreaded tin whistle time it seemed and except for the poor tutor, most moms quickly found an excuse to leave the room during tin whistle time.  I didn't intentionally not to tin whistle, but maybe subconsciously I just didn't go there.  However I do want them getting the music theory and all and then I remberer the Jon Schmidt (aka the guy from the Piano Guys) music program I had.  My dad had gotten it a few years ago (before the Piano Guys YouTube videos but we already listened to his piano arrangements on Pandora) to teach my niece but then they didn't end up doing it so he sent it to me.  I had attempted it but J just wasn't ready for any formal music lessons and I think I wasn't either.  It was just too much to try and sit down at the piano and focus when we were still new to homeschool and everything else already felt so hands on and intensive it was like, trying to add piano to the mix seemed impossible and I didn't want to kill myself over it.  So I pulled out the program and we got started on that this week.  It went so much better with her being 8 and B is 5 but he was doing very well too but I didn't put pressure on him as he was ready to be done and J was excited to keep going.  I'm fine with him going at a different pace. 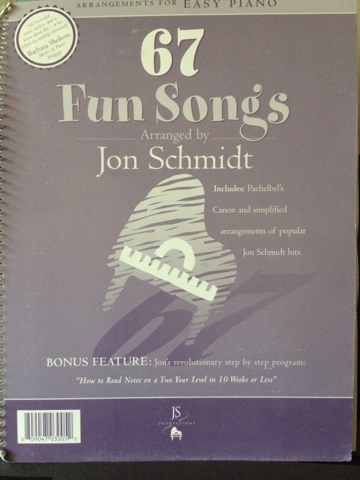 It's a totally different method of learning the piano.  Rather than starting with middle C and playing it over and over again for the first lesson, Jon Schmidt introduces them to 2 anchor lines and memorizing where those lines are on the piano, then from there most notes they can find by determining if it's a step or skip up or down from the anchor line note.  Other piano skills and technique are supposed to be easier assimilated more naturally as they quickly get the hang of finding their way around the piano.
By the end of the first lesson my daughter was to try playing the top hand of Lullaby (not worrying about timing or anything like that...but just finding the notes and typing them in on the keyboard).  I made this sheet to cover the song so she would be distracted or visually overwhelmed by all the music at one and had her start with just the first bar, then sliding the black strip out more as she could confidently find those notes.  I told her only the first 3 bars for the first day and to just take it easy do she wouldn't get frustrated... Woah unintentional reverse psychology on that one...she determined to play the whole first line and start on the second.  I told her to just limit to 10-15 minutes and take a break, she pretty much did it all day.  It was funny AND I'm so glad I waited with her, couldn't have had a better start! 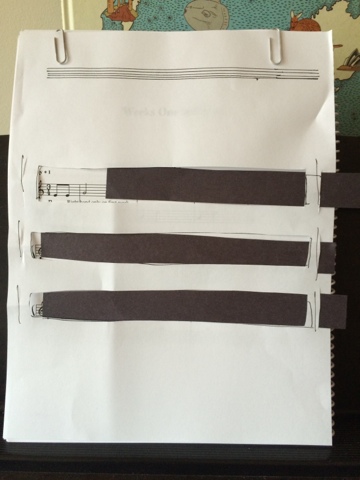 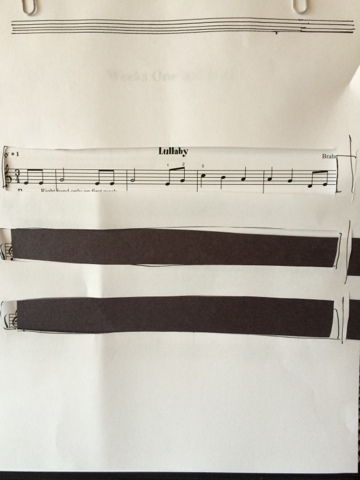 We shall see how it goes but this one line she can play is already much more exciting than my first piano lesson, which I still have the book here it is 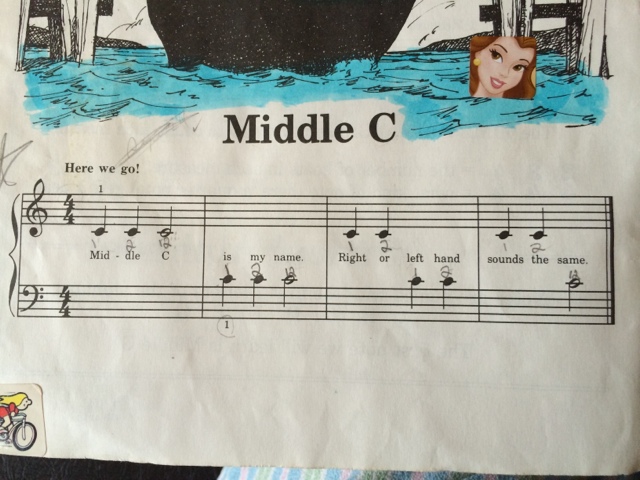 She will be learning to play with the left hand simultaneously in week 2 already.  So anyways we started that as well as J continuing to practice ukulele and B sometimes joins in and wants to try playing certain notes or practice a strumming pattern, but I just let him have fun with it at his age, I don't want to force music too soon and then have them hate it.  So I gently encourage them so they can develop an interest and excitement from within so that when they put the effort into playing, it will be more satisfying, enjoyable and motivating.

Posted by Candace @ Candace Creations at 8:01 AM

It's up to you, in your own home, to make the best of your time with the chiropractor. Be sure to stretch and exercise. play bazaar satta king It'll make a big difference.