Well to wrap up the week and what we did with our Classical Conversations...I will admit things did not go according to the rough plan.  I am not rigid and am flexibly structured as I've got a general plan of what we are doing and learning and a rhythm for our days and for the week....but this week it was fall break so that threw us off, even though we don't go to public school, all our other activities were either off or rescheduled for odd times we aren't used to.  Add to that a week of pretty dreary weather when we are dying to be outside...things felt random.  We did a lot but also didn't do a lot of the ideas I had come up with to go with our week 5 memory work.

Aside from Math practice and some form of copywork/writing/literature/poetry we spent a good portion of this day working on a diy doll bakery stand and all the goods.  Everyone was into it, even my son made a little cake for his sister.  The boys also are playing pretty well together most the time so they can do their own thing nearby if I'm doing some hands on and perhaps girly project with my daughter.  We had a blast with this. 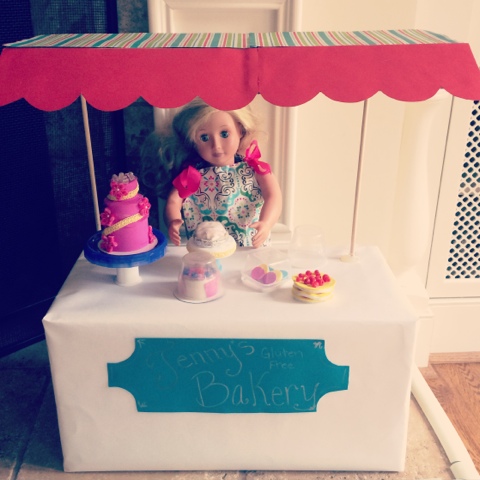 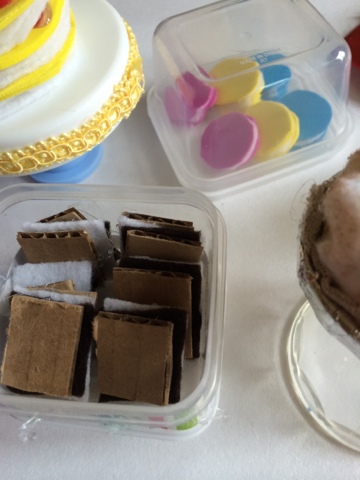 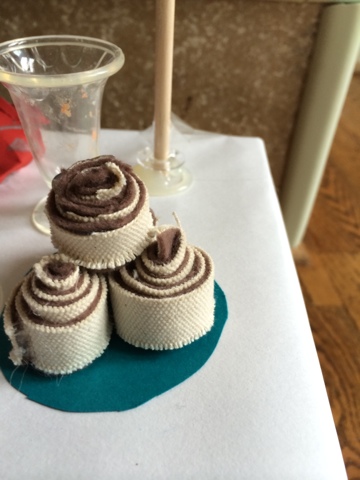 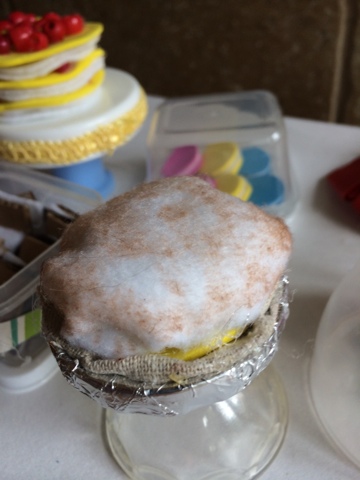 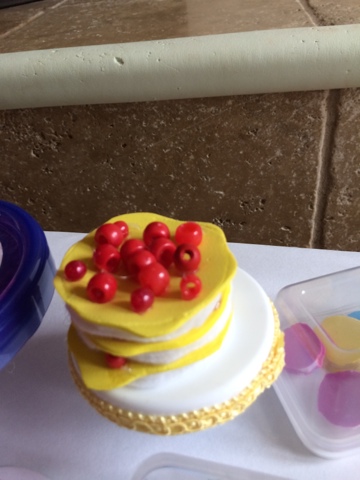 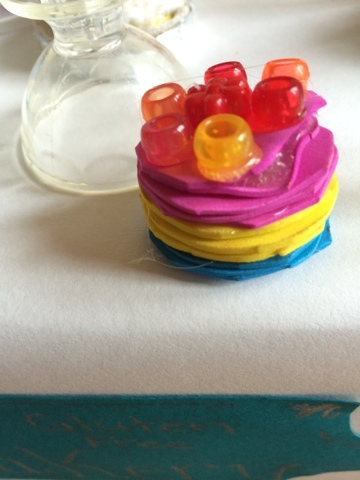 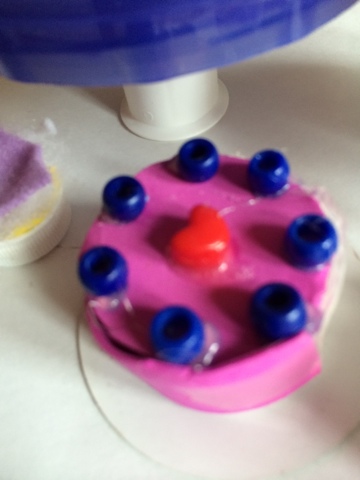 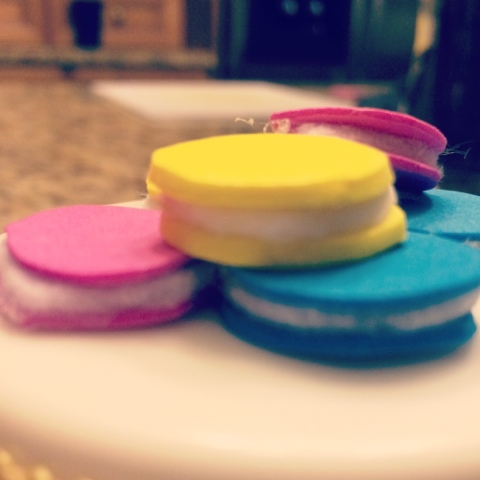 We made everything from materials found around the house like cardboard, craft foam, felt, paper, beads and the glue gun!

After playing bakery all day and making fake baked goods, on Tuesday my daughter wanted to bake REAL cinnamon rolls.  So after she got a few basic things done, some chores and copying a couple more lines from the poem she's working on, read a few fables and nursery rhymes. We set out to make gluten free dairy free cinnamon rolls.  We used the recipe and instructions from recreating happiness and they turned out amazing!!!  I'll make another post about our substitutions to fit our dietary issues but it was a very practical hands on math and science time.  I had my daughter read out the recipe and then dictate the instructions for reading comprehension, we talked about measurements and equivalents and fractions and she was able to figure out if we need half a cup we could use the half cup measuring cup or use 2 scoops of the 1/4 cup and it would be the same.  She enjoyed seeing the science-y reaction of the yeast activating in the milk and sugar and we discussed that process.  Then she was excited to see the yeast at work again when we set the cinnamon rolls in the warming drawer to proof and watch them grow.  She learned how to substitute fats in the recipe swapping butter for coconut oil and shortening.... It was a pretty extensive hands on learning experience for her and thank The Lord I had the patience that day to make the most of it. 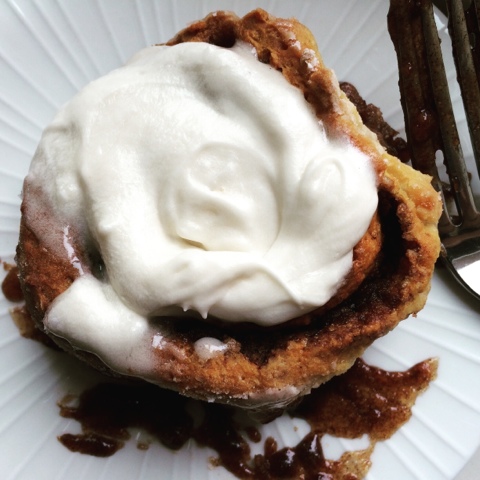 Finally we were going to get started on our week 5 CC memory work but the rain had slowed to a sprinkle and my daughter was dying to get her rain jacket on and rainboots and you know what?  I think experiencing playing in the rain is more valuable then some rote memorization so we went outside for a bit.  The kids were exploring nature, building dams in puddles and changing the flow of water, more science and learning was going on all by itself :). I love that children are little scientists when they are exploring and playing outside.  I started pulling weeds from our gravel rock landscape project we are taking forever to finish and the weeds are out of control.  I was happy to discover that pulling weeds in the light rain is awesome because there are 1. no bugs 2. the ground is soft so they pull out easier and 3. it's not hot.  My daughter decided to help me as she loves pulling the weeds out and checking out the roots.  We were shaking the excess dirt off and tossing them to a pile when suddenly I got a clump of dirt/mud in my face!  My daughter was quick to apologize as she missed the pile and thought I was going to be mad at her.  I was a little stunned, and just when I was about to say something like "well pay more attention to what you're doing!" Or something to that effect....I playfully pulled out a weed and tossed it in her direction... Soon we were in an all out weed dirt mud clod throwing war and we were chasing eachother like a snowball fight!  My son got in on the action too but he teamed up with his sister!  When we were done we all had dirt and mud all over our faces, clothes, hair...we went inside to get cleaned up and by then it was time for gymnastics and we did never get to our CC work other than reviewing skip counting while I washed their hair. But my daughter said it was THE best day of her life!  And she couldn't believe we did that. 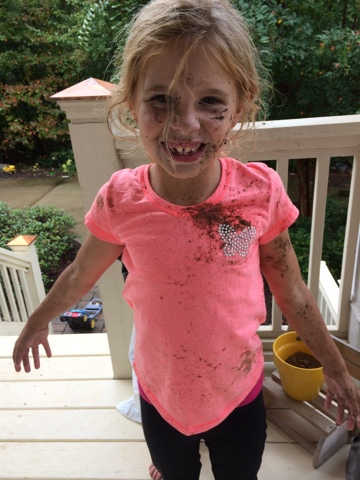 After gymnastics she reads for an hour every night more or less, she's a night owl so she devours books after we put her to bed.

Wednesday, we finally got to our CC memory work.  We also did math and worked on her Proverbs in Cursive copywork book.  The frog puppet "taught" them English, Latin and math...I don't know why but they love the frog puppet... He's kinda rediculous and obnoxious but whatever ;) I may have a little fun using him too...

For science we got our nature notebooks and made a page about invertebrates.  They drew the different kinds and labeled them.  I helped my 5 year old with the writing in his book....and spelled it wrong! Lol he asked me to draw me krabs after so that's why he's in the corner.  It got cut off but for his sponge he tried to draw sponge bob...even though they don't like that show that much. 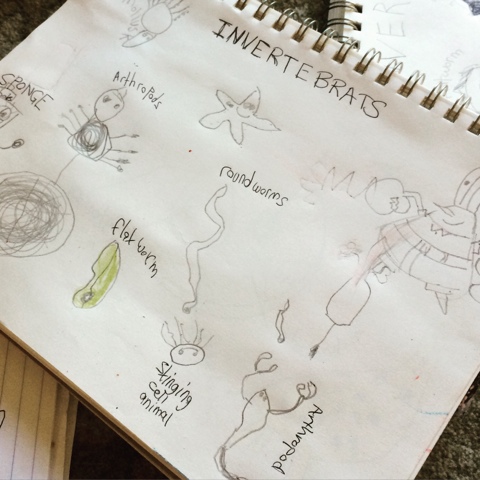 And that was pretty much all we did to expand on our CC memory work this week. I had planned to get a couple library books and doing a project where they designed their own coins with crayola air dry clay after seeing a picture of a denarius (Roman coin) in my art history book.  We also looked at some Roman architecture, looked at the difference between the Greek and Roman columns and then compared the columns on our porch and asked the kids what style of column ours was more like.  We also refered to our MAPS book for geography of Egyptian Empire and got kinda sidetracked for a bit enjoying delving into that and the different animals and features on that page about Egypt.  But that book is so engaging it just draws you in! And it worked because we saw another map today of the Mediteranian Sea and surrounding areas and my daughter quickly pointed out the Nile River and the Nile Delta so that's always a happy thing when you know they got it!

Thursday...we did some basic math practice ( we finished our Singapore book and I have to order the next one but I'm also looking into switching to math mammoth which is more mastery but still spiral but a slower spiral than Singapore) so while I figure that out we are reviewing and working on things I know she could use more practice with.  Math war is an awesome game for us because she just needs to work on figuring it out faster and my son who is 5 will be on my team and he's just figuring out and practicing these addition facts so it helps them both at the same time.
Another math game we like is Dino Tracks, it's a place value game and can be made more advanced with the optional playing cards that give lots of word problem practice.

Thursday we also listened to proverbs from nature and read more Aseops Fables while the kids built with blocks, Legos and megaformers and we ran some errands including taking some of our baby things to a friend who just had a baby and dropping off curtains I altered to another friend.  We ran by Hobby Lobby and that was a mistake, my daughter was excited to start buying fabric for her Leo Shop she wants to start.  She's been up in her bed after reading every night designing Leotards and she's very serious about this plan and even told me she'll cut me 50% of what she makes since she basically needs me to sew them and help her get her business going.  It's really cute and fun to see her creativity and mind going and she has 2 notebooks filled with Leo design sketches and even showing what they look like while in handstand, bridge, etc.  But I was only there to look for a button real quick and when I said no Leo fabric I pretty much crushed her dreams....for the moment. She's over it now and back to her notebook designing more Leos.

For Friday I already posted about that in the previous post.  So basically yeah...this week didn't necessarily accomplish all I wanted to and I had some good ideas that didn't pan out but at the end of the day the delight centered child led approach balanced out with the structured things we just do as part of our normal daily and weekly rhythm (the three Rs) and overall it was another learning filled week for this relaxed eclectic Charlotte Mason Classical  Conversations family :). I feel like they're always learning and growing regardless of how much or little I plan.  That's where I can nod my head along with Unschoolers and I get it. I feel like an unschooler at times but I know I'm not really truly one because we do math books and practice regularly and I sometimes make them do things even when they complain and I will restrict time allowed playing on my phone or watching tv...not like crazy...but I definitely have some boundaries and expectations for them...things run smoother that way. So I realize we're not truly Unschoolers but relaxed eclectic trying to bring the best of all methods together in a way that works for us and gives us peaceful productive inspiring days...for the most part ;).

Some final thoughts for the week: What I'm learning through this homeschool parenting journey? Modify when needed, make it hands on as much as possible, consolidate and do as much together with all the kids as possible, follow their interests, don't be rigid, learn by living and have a big picture plan for the day, the week, the year to get things going but be flexible and follow the flow of the day, the week, and pray for wisdom and inspiration in the moment and a gaurd over my mouth...and be a good example of how to be happy, productive, hardworking and enjoy life through contentment, praising The Lord in conversation with my kids, making the moments count, being simple and willing to have fun.  Making sure I'm trying to be the person I am trying to raise my kids to be!  Rather than just focusing on training them, I'm learning to know and train myself!  And being real with my kids. If I'm having a bad day I am honest about it. Apologize for my snippiness and ask them to pray for me and help me out because I'm struggling to be patient and it's not their fault.  Being real goes a long way, they get it.  It's good for everyone's emotion intelligence if we can be real and talk about that stuff and accept that we are all human and we all need some grace!