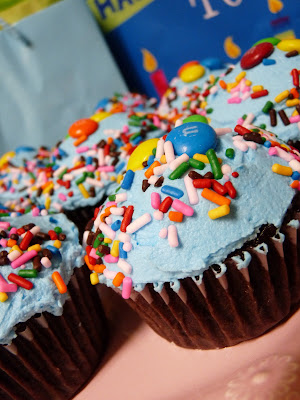 Gluten Free Cupcakes with Dairy Free Buttercream Frosting
Well, we got home from our trip late a night and the next day was J's birthday! She is now FOUR years old and I can't believe it, although now that she is officially 4, she feels very big and has been acting as mature as possible.  Such a cutie.  Anyways, I had a box of better crocker Gluten Free cake mix

to make up, (I use earth balance vegan buttery sticks instead of butter when making it) but then I had no clue what to do for frosting.  It was a crazy day, I didn't have time to go to the store, I was out of everything plus every recipe I have for frosting calls for milk, butter, heavy cream, whipping cream, ect.  I was SO happy when I found this recipe which only used shortening, water and confectioners sugar and luckily I had just enough of everything to make half of this recipe.  Which was the perfect amount.  The Sprinkles weren't really sticking so I poured them all into a bowl and then rolled the frosted cupcakes in the sprinkles after I had already stuck on the M&Ms (I just took the M&Ms off when eating for the baby and I to make it dairy free again).  Anyways, this frosting was super good and it made me so happy when J saw her cupcakes, she looked at them and her eyes got real big and then she asked "Are those gluten cupcakes for other kids?" and I said, "No, honey, they are your birthyday cupcakes made special for you. They have no gluten at all!" She was SO excited!  And as far as taste, these were just as good as any other box cupcakes with frosting, no one felt deprived in this house!

Posted by Candace @ Candace Creations at 9:34 AM

You do such a wonderful job of making sure she doesnt miss out on these fun kid things! (oh, and I guess mommies like cupcakes too - dont they?) You are such a great mom! We cant wait to see jordan and wish her a happy birthday! Inlaws in town this week though (today through next Saturday)!

Those cupcakes look so good!

THANKS! Seriously no one would know these cupcakes were gluten free and dairy free!