Timeline
We are alacking on timeline....(just keeping it real!)
History
1400s-Henry the Navigator established colonial rule in Africa leading to slave trade between the Portuguese and the Ashanti...
Reviewed and memorized song using the CC app and making up actions.  Continued reading The a Royal Diaries: Nzingha Warrioir Queen of Matamba.  It isn't about Henry the navigator but is about the villages working together to fight off the Portuguese in Angola, Africa set in the 1500s. (Bonus on this book both my daughter and son are enjoying hearing about the way the clans and villages are because they are relating it to Clash of Clans which they sometimes play...)
Science
Each continents highest mountain
We reviewed this video with actions on YouTube.
http://youtu.be/xumDdxY7eQg
Then we practiced using skittles on a map.  They just needed to put the right mountain on the right continent.
Geography
Middle East
We rented a short video about Isresl from the library that I found to go along with this section.
And of course visited our MAPS book to explore that region.
English grammar
More helping verbs...we honestly don't get a lot out of this or do much with it...we just cover it and move on
Latin
Noun endings (1st Declension)
Same thing...don't go too much into it we just learn it and move on and hopefully if they take Latin or when the learn other foreign languages later on this will help some things click. So for now just settin' the lil' pegs in place and keeping it low key!
Fine Arts
This weeks artist was Angelico, however we did not ever get a chance to get an Angelico inspired art project done like I had planned. (This isn't what we were going to do but it's a good idea you can do with kids for Angelico http://www.thatartistwoman.org/2008/12/pastel-resist-madonna-art-project.html?m=1 I showed them some pictures of Angelico paintings in an art book but that's as far as we got.  We did a lot of other drawing and some YouTube watercolor painting tutorials to practice for our nature journaling this week...CC is not the only thing we do and sometimes we do more with CC and sometimes we do less with it to make time for other projects or activities we are focused on.
Vase of Tulips by B age 5 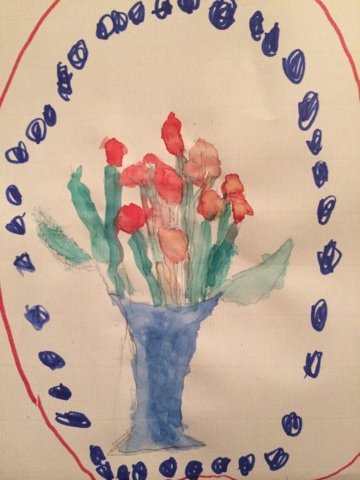 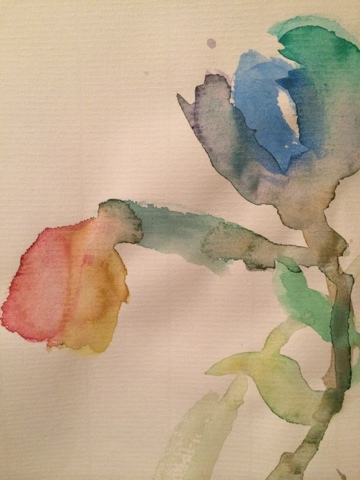 Think about how you sleep at night. Consider positioning a pillow beneath your head and shoulders. Place a rolled up towel beneath your neck and knees to maintain the natural curve of your body. play bazaar satta king