Hello!  Yes I haven't quit my blog although it may have appeared that way. Our hard drive crashed on our laptop and I have a hard time blogging on the ipad or iphone, but sometimes my hubby leaves his work laptop at home so here's an update of what we have been up to the past month.  We started homeschooling my 5 year old girl and it has been so much fun, we are really enjoying it and I don't know what I was so nervous/worried about when trying to make the final decision to do it.  Most of all, she is so happy and loves it too.  Anyways, I still have a lot to learn but right now I really like Charlotte Mason and Montessori style of learning...haven't bought a curriculum but am kind of making one as we go. I do read all the posts from Free Your Kids on Facebook but I just don't know if I could let go and trust the whole "unschooling" method although it is interesting to read what people say about it. One website that has been really useful is 1+1+1=1.  I picked up a laminator and we are doing the You Can Read printables to learn and practice site words and she has a lot of fun with it.  We also printed out the Angry Birds theme pack that helps introduce money, fractions, greater than/less than, and other math skills.  And I've also made a tot book and some other montesorri printabes for my 2 year old and put it in his mickey mouse binder so he gets all "I want MY school work!" and has fun with it too.  I also made her some easy reader books after I saw the BOB books but thought she would be more interested if it was personal to her.  I made one about the zoo and drew simple pictures and then I made 2 other books and had her draw the illustrations.  I also read to her a lot, we have read a few of the Ramona books by Beverly Cleary, we love them! and at the moment are halfway through the Secret Garden.  I usually have her sketch in her notebook while I read, it helps her sit still and she seems to retain more and usually ends up drawing scenes that I'm reading and trying to write names of characters.  Before I had her draw, she would be listening, but also constantly moving around, looking at herself in the mirror and interrupting...the drawing though made a huge difference.

I also picked up all sorts of kindergarten-1 workbooks at an educational supply store we happened to stuble upon in St. Louis (our first week of homeschool was a road trip from Omaha to Alpharetta, GA.  We stopped in St. Louis both ways and spent a weekend in Nashville on the way down.)

Aside from working on reading, math and doing science experiments, Some of the things J has learned to do is make scrambled eggs and french toast, vaccuum and sweep and today she wanted to learn how to sew.  She has started asking lately if I thought Santa could bring her a kid sewing machine, but wasn't sure if there was such a thing. So today she gor her wish and first started out by helping me make some binkie clips as you can see here she is hammering the snaps in place Ever have that dream you are at school and realize you forgot to wear pants? well, no biggie

Then she used some scraps and she made herself a little purse and then a bag for her brother.  She did awesome, I was sitting right next to her to instruct and would reach over and help her stay on the fabric if it started to get crooked but really, I didn't have to touch too much.  She was so excited and eager to learn, she really paid attention to what I told her and implemented it.  You can see in her face how excited she is Ever have that dream you are at school with no pants on? No biggie

And here she is modelling her AWESOME purse 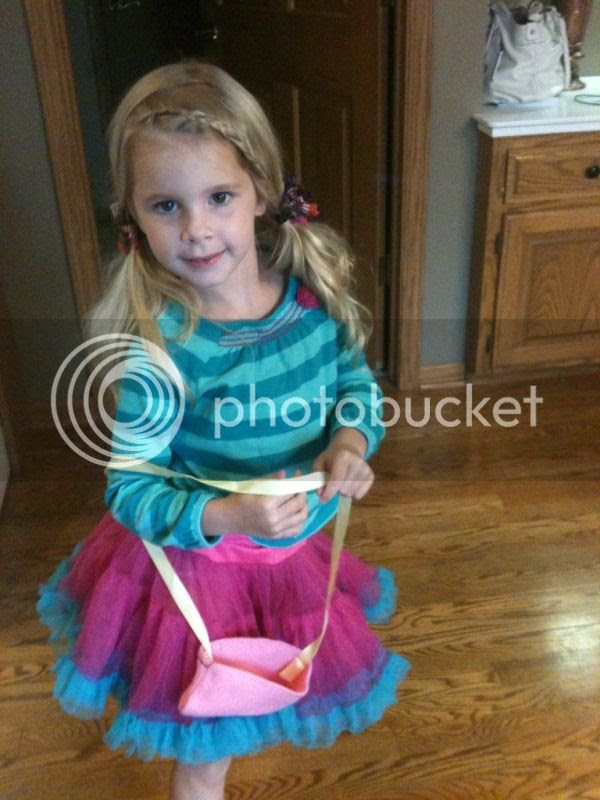 and the bag for her brother 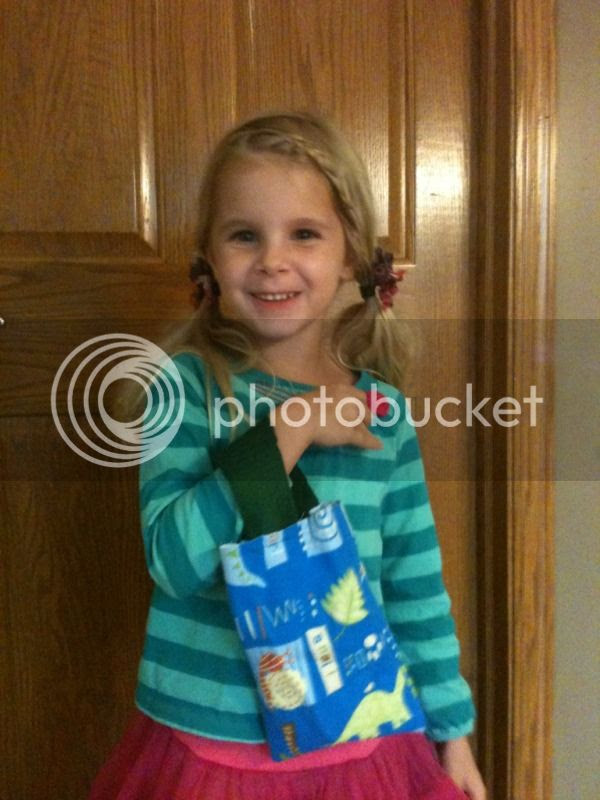 Then she told me she wanted to sew a book.  I tried to think of something else but she insisted...like a soft kid book so I remembered I had some cream polar fleece scraps so I cut some rectangles and stacked them up and had her sew a seam down the middle.  Then she sewed a zigzag stitch border around each page (6 of them) and that is where we left off...

We spend plenty of time outside and learn about nature
Here is a nature journal she made from collecting leaves in the backyard.  She glued them into the book then drew around them turning each leaf into an animal or insect. Here is a page from her notebook from when we were in Georgia surrounded by pine trees.  We went for a walk and she collected pine cones and pine needles and studied what the pine trees looked like and later drew this picture 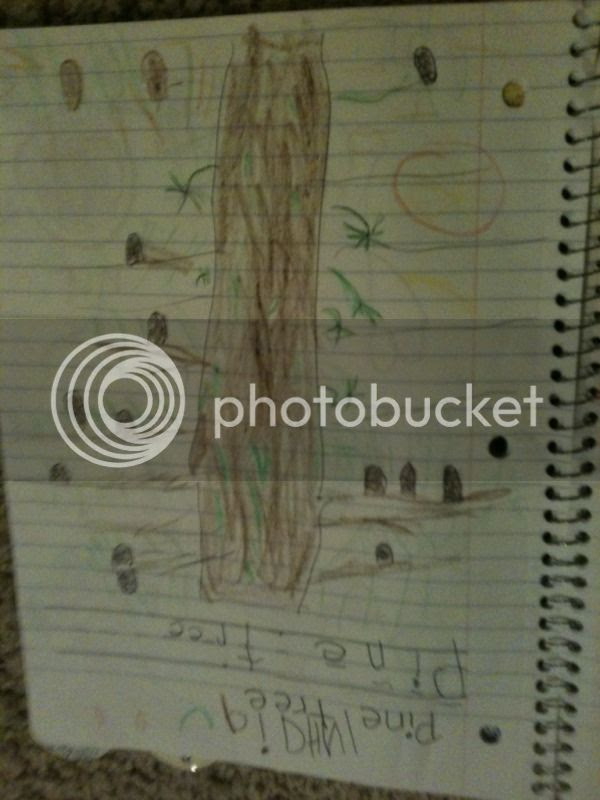 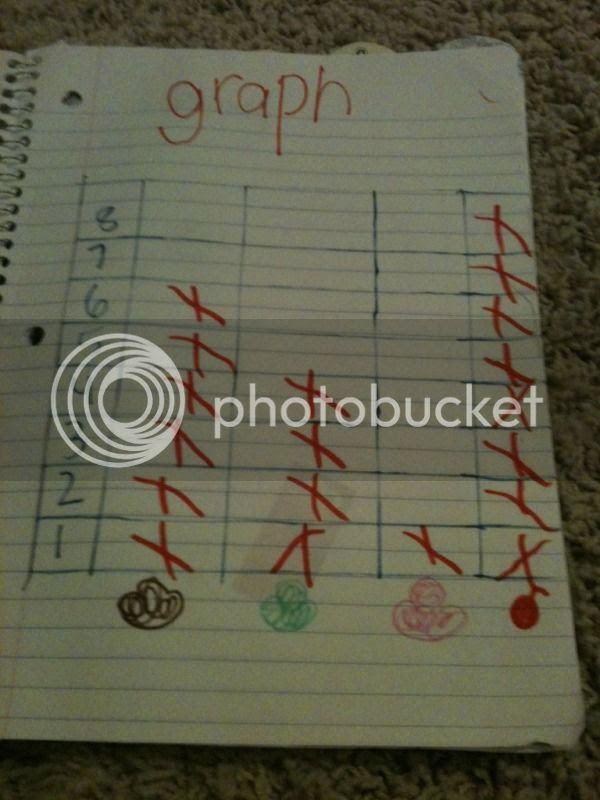 And for my favorite subject...ART I have been introducing her to artists and then doing an art project inspire by that artist.  The first one was Van Gogh...and she will never forget...she made a little chant about him...Van Gogh the Weirdo cut his own ear he painted impasto....and fyi she says she will NEVER marry Van Gogh...she didn't even like talking about him or looking at his art until the next day I pulled out some examples of his sunflower still lifes and then in an old egg carton mixed tempura paint with flour and had her paint a sunflour with a popscicle stick to recreate the style of Van Gogh.  It was amazing she went from hating him to appreciating him. 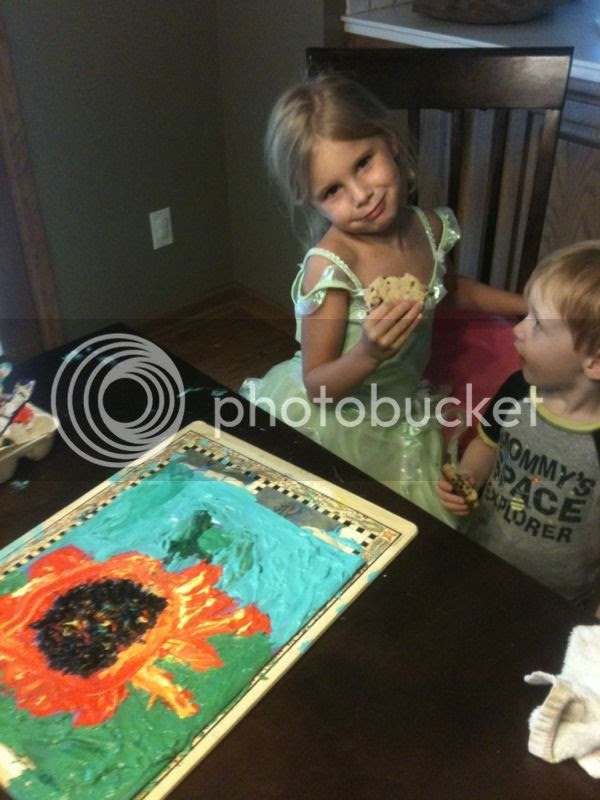 I decided to stick with impressionists for now so the next artist I introduced her to was Edgar Degas.  To help her remember we just say 'Degas painted Dancers".  She liked his art too but wasn't as excited about her Degas style painting technique as the Van Gogh...I think it was probably just bad timing, she wasn't really in a good mood and I probably should have saved it for another time so she would have appreciated it more but her dancer still turned out great.  We soaked canvas in milk and then she made the picture with chalk pastel, then we flipped it over and ironed the back to set the pastels in. I have a rule that I picked up when I worked at at Monart school...never touch a child's artwork.  I will sit at the table with her and talk to her about what she is doing and have a scrap piece of paper so I can demonstrate how to draw something or any new technique, but I never put my hands on her art and she has become very proud of that and protective of that.  Kids want to look at their finished product at the end and know they did it themselves.  AND sometimes when they don't do it "right" it ends up being better and I would hate to miss out on seeing how hers turns out.


Discovering Great Artists: Hands-On Art for Children in the Styles of the Great Masters

We also take advantage of our zoo membership.  Last week we went to a homeschool workshop that was all about habitats and they also took us behind the scenes of the shark tank which was a little scary since with all those little people and nothing really to stop your from falling in...let me just say that it was cool but I also was annoying the crap out of Jordan making her hold my hand and constantly pulling her back...but there were all these little boys who were active and curious and oblivious and NOT anywhere near their moms and I could just see her getting bumped into the tank!  Apparently that is not normally part of the workshop but it was a rare occasion they decided to take us up there...and like I said, it was definitely cool, but also a little nerve wracking. Oh and of course she still has playdates with friends, goes to AWANA and MOPPETS and pretty much makes friends wherever she goes.  In Georgia, she learned how to braid pipe cleaners in the hotel room. She made so many of them then took the to the park and gave them all away to either elderly people or other little girls and ended up making a bunch of friends that we'll be able to call after we move.

Haha, I loved the "no pants at school" comment. That's hilarious and too cute.
I know what you mean about the blog taking the back burner since homeschooling. My priorities and interests have taken a new route now since deciding to homeschool :). I'm sure loving it though.

nice blog i like it very much .nice piture . u done great work for me to go ahead. very useful . helpful information you provide .i like this very much
empower network if you do not take serious contact me please empower network

Hi, Nice post thanks for sharing. Would you please consider adding a link to my website on your page. Please email me back. Thanks!